Monty Python legend John Cleese apparently has decided that to hell with it, he’s going to get himself canceled, and he doesn’t give a damn if he is. The tweet above was part of a long string of them tweaking transgender activists, J.K. Rowling haters and more, but his “woke joke” was especially apt.

The Australian singer Sia (never heard of her—you?) wrote and directed an soon-to-be released movie titled “Music” about a young woman with autism. Music is played by actress Maddie Ziegler, who is apparently not on the autistic spectrum.

The cyber-mob, almost all of which have never directed or cast anything, were outraged, with reactions like this from Irish actress Bronagh Waugh:

END_OF_DOCUMENT_TOKEN_TO_BE_REPLACED 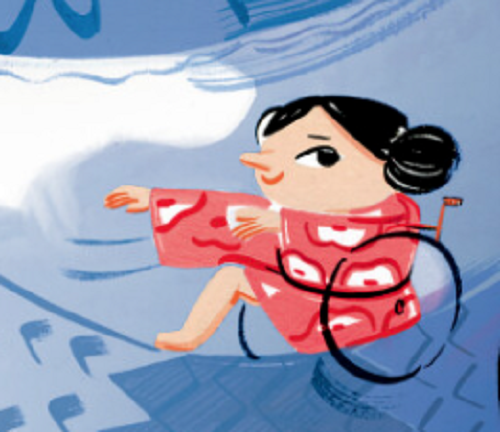 This could have been a standard Ethics Dunce post, but I think it warrants more attention than that category might suggest.

One of the reasons it is fair to say that the President had the election stolen from him, or, as he likes to say (and shouldn’t) “rigged,” is that his supporters have been relentlessly intimidated and indoctrinated into attitudes designed to make them doubt their own judgment and values, especially those that aligned with the President’s policies. The tactics have ranged from threatening and even physically attacking citizens for wearing MAGA hats, to forced resignations of company officials and academics for the “crime” of endorsing Donald Trump’s actions in office.

Self-censorship triggered by fear of rejection and social isolation allowed Facebook, for example, to become a progressive echo chamber with minimal dissent. (I haven’t posted on anything related to the election for a month. It’s just a waste of time, and I end up losing respect for people I would like to keep as friends while having to defend views that should require no defense.) We are also seeing the related phenomenon of self-flagellation, self-shaming and self-cancelling of the sort demanded by the “Silence is violence” mobs. Like tortured and brain-washed North Korean prisoners of war,  we are ordered to denounce our great sins, such as engaging in “systemic racism,” enjoying “white privilege,” defying the political correctness police, and daring to support the President of the United States. When Black Lives Matter terrorists burst into restaurants and demand that diners raise their fists or hands in support of the Marxist, racist, anti-law enforcement group, the photographic evidence is that they do as ordered in hopes that they be left alone. What nation’s citizens from the past, say, 85 years ago do these timid souls remind you of?

Adam Pottle’s children’s book “The Most Awesome Character in the World” tells of Philomena, a young deaf girl whose  deafness  has made her vibrant and  imaginative person. (The author is also deaf.)  .

Pottle did not have approval over the illustrations his publisher chose to complete his book, and with the nudging of some negative reviews online, was horrified at the illustration above.  He concluded that the single drawing was “racist,” and Pottle asked that it be changed. The publisher, Reycraft Books, refused (the profit margin on any book is small, and this would guarantee a money-losing project), so Pottle took to social media and asked people not to buy his book and retailers not to stock it. Several retailers supported him.

END_OF_DOCUMENT_TOKEN_TO_BE_REPLACED

One of the more ridiculous moments in the hearings to vet Judge Barrett was the contrived indignation expressed by Senator Hirono and Senator Cory Booker when the nominee used the term “sexual preference.” The Democrats had nothing valid to complain about regarding the judge—attacking her religion had proven unpopular and ugly in her previous confirmation hearings—so this was the best they could do: political correctness and dubious language taboos.

It wasn’t just them, of course: Patty Murray, the third-ranking Democrat in the Senate, tweeted: “Judge Barrett using this phrase is shameful and offensive—and it tells us exactly what we need to know about how she views the LGBTQIA+ community.” Yes, that’s certainly fair: the unplanned and innocent use of term that has been unofficially designated as “offensive” by activists tells Democrats “all they need to know.” This was the signature significance moment that saw Webster’s dictionary prove beyond a shadow of a doubt its unethical bias and lack of integrity when the company reacted to the Hirono-Booker vapours by changing the online definition of “sexual preference” to match the new GoodSpeak.

Honestly, why aren’t people embarrassed to be supporting a party and its allies that behave like this? But I digress.

As pointed out in the related Ethics Alarms article, inconveniently for Hirono, two of her Democratic colleagues on the Judiciary Committee and her party’s Presidential nominee, Joe Biden, had also recently used that phrase that “tells us exactly what we need to know” about them, which is—what exactly? That they missed a memo from the Language Police High Command? I’m confused.

So was National Review writer John McCormack, who relates his exchange with the Hawaiian Senator on the topic:

END_OF_DOCUMENT_TOKEN_TO_BE_REPLACED 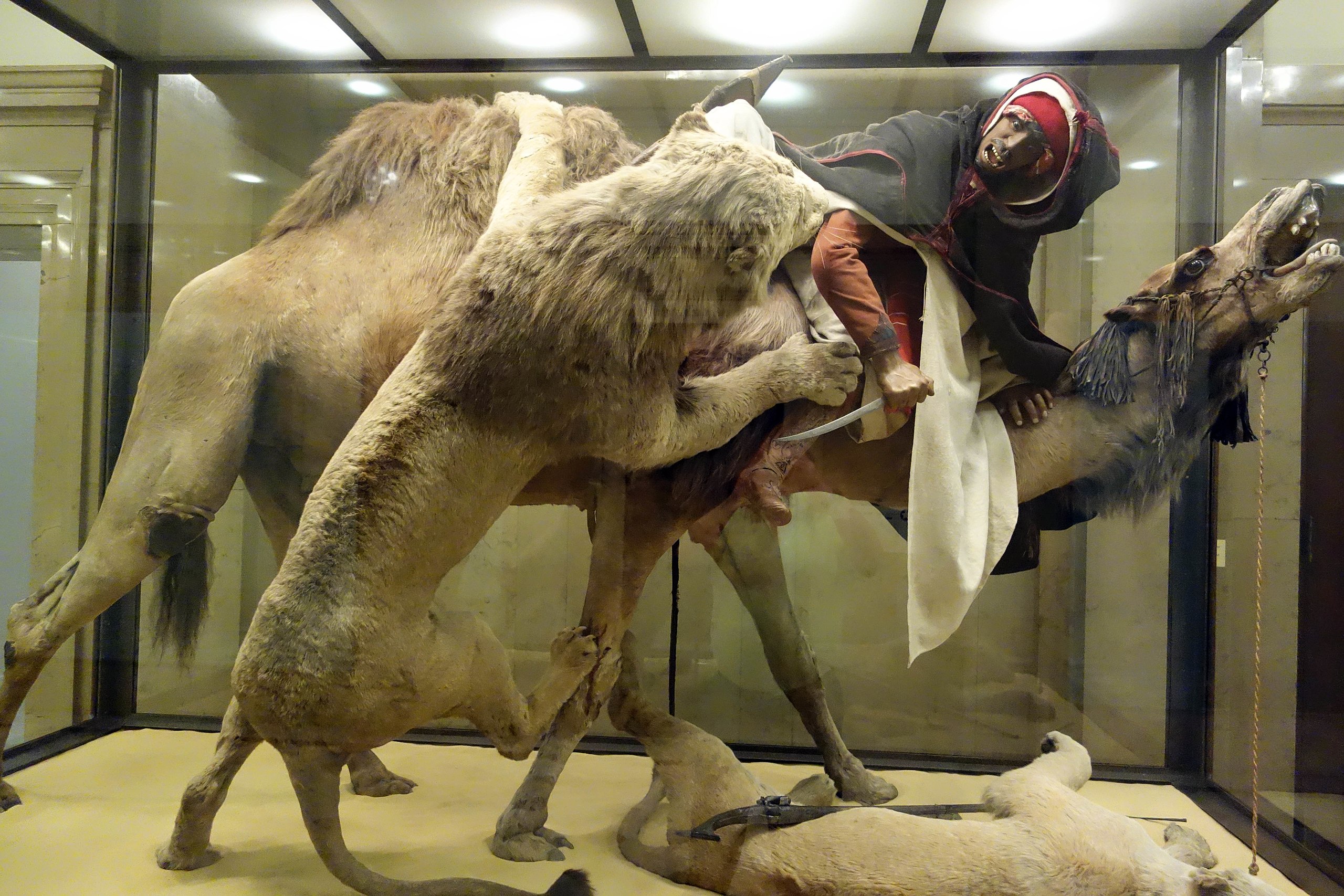 Boy, as a kid, would I have loved the diorama “Lion Attacking a Dromedary” at The Carnegie Museum of Natural History in Pittsburgh! Things like that—by “like that” I mean cool, stimulating exhibits that fired my curiosity—got me interested in all sorts of subjects growing up: paleontology, zoology, history. The creation of French naturalist and taxidermist Edouard Verreaux and his brother was made for the Paris Exposition of 1867 and has been at the Pittsburgh museum since 1899. I wish it had been lodged at the Peabody Museum in Cambridge, Mass., where I used to spend long, leisurely Saturdays with my best friend, Peter Bena.

But now, fully in the grip of what I call “The Great Stupid,” the Carnegie Museum’s interim director says the exhibit is being “reconsidered,” because the exciting scene has disturbed “some.” After all, it depicts violence against a man described as an Arab courier. Also, the victim’s garb has been determined to be “derived from” at least five separate North African cultures. So that’s bad. I’m not sure why, but it’s bad. I’m sure PETA thinks the scene encourages cruelty to camels.

END_OF_DOCUMENT_TOKEN_TO_BE_REPLACED

And they’re coming around the turn in the 2020 Asshole of the Year Derby! Senator Hirono is making her move! Here she comes out of the pack! It’s going to be a photo finish!

At Tuesday’s confirmation hearings for Supreme Court nominee Amy Coney Barrett, Sen. Dianne Feinstein (D–Calif.) asked Barrett if she would roll back protections for LGBT citizens. Barrett responded that she “never discriminated on the basis of sexual preference and would not discriminate on the basis of sexual preference.” Hawaii’s Senator Mazie Hirono then accused Barrett of using “outdated and offensive” terminology. (Later, so did Senator Cory Booker, who said Barrett was implying by the term that being gay was a choice and not an immutable characteristic.)

Barrett was forced into apologizing, insisting  that this was not her intention. I say “forced,” because when you are in a confirmation hearing and the vote is going to be a squeaker, you can’t say, as she justifiably could have, “Really Senator? You’re dictating politically correct words and language now? It was quite clear what I meant, and that kind of phrase policing is a cheap shot. You should be ashamed of yourself.”

END_OF_DOCUMENT_TOKEN_TO_BE_REPLACED

The New Yorker cartoon above, by the magazine’s iconic cartoonist George Booth, first ran in 1975. I remember finding it strange then. I just ran across it again, and it seems ripe for an Ethics Alarms poll.

You can’t fix stupid, as they say.

Or ignorant. Or ungrateful. Or obsessed.

In the document below, the product of The District of Columbia Facilities, and Commemorative Expressions Working Group, appointed I really don’t care when by Mayor Muriel Bowser, an arrogant and juvenile  committee recommends the “cancelling” of, among others, in our nation’s Capital, by removing all mention of their names, as well as their statues and memorials,

George Washington, after whom the city itself is named, and without whom the nation would not exist. END_OF_DOCUMENT_TOKEN_TO_BE_REPLACED

HBO Max thinks people are so stupid and shallow that they must have  “Blazing Saddles” explained to them, lest someone—one will do–think it’s intended to advance “systemic racism” rather than to ridicule it. I do not believe in hating people, but it takes every bit of principle and energy I can muster not to hate both the political correctness dictators who  believe in “trigger warnings,” and the hoards of dim bulbs and sheep-human hybrids who appreciate them. I’m still looking for the complete text of the introduction HBO Max has slapped on Mel Brooks’ masterpiece, but I know enough.

It is intoned  by University of Chicago professor of cinema studies and TCM host Jacqueline Stewart, who also delivered the disclaimer added to “Gone with the Wind.” I like Stewart, who is smart and knowledgeable, but I would have liked her better if she refused to participate in this insulting exercise.

“This movie is an overt and audacious spoof on classic Westerns,'” Stewart says. This, writes Kyle Smith in the New York Post, is to “set things up for anyone who might be clicking on the Mel Brooks comedy thinking they’re in for Swedish drama about the lingonberry harvest.” “It’s as provocative today as it was when it premiered back in 1974,” she says. No, tragically, it is more provocative. Thanks to the racial politics of censorship and ruthless power-seeking that has metastasized on the Left in the George Floyd Freakout, professors are losing their jobs and being “cancelled” for mentioning the word that Blazing Saddles uses repeatedly as a punchline. Any professor who analyzed the use of racist language in “Blazing Saddles” would risk being called a racist by the student body. END_OF_DOCUMENT_TOKEN_TO_BE_REPLACED

Clinesmith is the first individual to be charged as part of U.S. Attorney John Durham’s investigation into the efforts  to spy on the Trump campaign and Trump administration. Both Durham and Attorney General William Barr have stated that they had reason to believe the entire investigation of the President, which allegedly began in late July of 2016, was illicit and unjustified.

Expect the news media, in collaboration with Democrats, to bury, spin, deny and otherwise attempt to mitigate the sinister implications of this development, and those to follow. END_OF_DOCUMENT_TOKEN_TO_BE_REPLACED

1. When late is worse than never. Reports say that the Washington Redskins will officially announce that they are changing their name, to what nobody knows, not even them. The team’s obnoxious owner, Dan Snyder, who has run the once cultishly popular and successful NFL franchise into the ground during his incompetent stewardship, had memorably said that he would never change the controversial team name, unquestionably the most politically incorrect in all of sports. That pledge did not anticipate his league going nuts and supine before the George Floyd Freakout, to the point that there may be mandatory kneeling by the time the 2020 season opens.

The attack on the Redskins name was always about power, as has been the decades-long assault on all team nicknames with ethnic references. Survey after survey has shown that the vast majority of Native Americans don’t care; the idea is to bring corporate interests to heel, and then aim at the next, more substantive objective. The competent way for a team to handle this problem is to quietly retire a problematic name like “Redskins” (or a anachronistically provocative logo like the Cleveland Indians’ Chief Wahoo) when the heat is off, making it clear that the change is volitional and not compelled. Then the social justice mob members can’t puff out their little pigeon chests with pride and think “I did this! What’s the next target?”

I don’t care what the D.C. team’s name is. I do care about dishonest and illogical arguments, which is what have been mounted against this name for as long as I can remember. That’s why the Redskins and related matters have so often been a topic here.