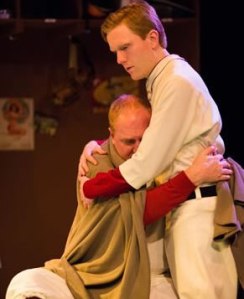 I haven’t mentioned it here, but we are ending the 20 year adventure of my intentionally out-of-fashion theater company, The American Century Theater, after next season. One of the things I will miss most about it is that working so closely with the great works of stage literature we produce causes their wisdom and life observations to stick with us. Since I tend to choose works that involve ethical dilemmas, this has had professional as well as personal benefits.

I was thinking about the Mark Harris play (and novel, and movie) “Bang The Drum Slowly” in May, when I wrote about the kindness shown to Pasco High School student Vanessa Garcia, who was dying of cancer, because we were performing it at the time.  The story involves a baseball team and how it responds to a third-string catcher who is dying of Hodgkin’s Disease. It is about kindness and the Golden Rule, and the ways the impending death of someone in our life often brings into sharper focus the importance of kindness and our shared obligations on this perplexing journey to oblivion we all must travel together. But I really wasn’t thinking about “Bang The Drum Slowly” yesterday. Yesterday, I was just having a wonderful time talking about baseball, politics and family with my old friend from law school, who happened to be in a hospice.

He had been there since October, after doctors had told him that his congestive heart disease and multiple lung blood clots were beyond their ability to treat. They gave him just a few weeks to live, but he had fooled them. Yesterday he was funny, energetic and upbeat. It could have been his law school avatar in front of me, except for the white beard, the oxygen tank, and the wheel chair.

I think it was the fourth time I had a long visit with him since last fall, not nearly enough. He gave me crap about it too, but my friend understood me and knew that I knew him as well—like me, he would have been less than diligent visiting a sick friend as often as he should. He was always too busy living, until, that is, he had to start dying.

Yesterday’s visit almost didn’t happen. I hadn’t seen him in several weeks, only following his exploits—a birthday, his son’s college graduation, a Nationals game—on Facebook. In response to a pointed e-mail from my friend last week, I finally made an appointment to come by. He cancelled our date Saturday night, saying he was sick, but then contacted me Sunday to announce that he felt better. Could I still come by? Indeed I could.

It was a glorious day in Northern Virginia, sunny, cool and breezy, and we sat together on the hospice building’s long porch. Periodically my friend had to move out of the way as one of his ancient housemates, using a walker, had to pass through the narrow corridor, so he would push his wheelchair backwards with his feet, and joke with them about his spryness and how he was the whippersnapper of the group, which at just short of 65, he certainly was. The time sped by, as he made me jot down various essays from Ethics Alarms that he admired and wanted to send to his politically involved friends. Earlier that day I had finally e-mailed him a non-political post from this year that he had asked for more than once—this one, about the death of my childhood friend, Greg.

The living, lively friend in front of me complained about his beloved Cincinnati Reds (it was he who gave me his family’s prime tickets to Game Six of the 1975 World Series, where I saw Carlton Fisk hit his immortal homer off what is now called Fisk’s Pole, winning among the greatest games in baseball history and making me one of the 33,000 luckiest Boston baseball fans alive), Eric Holder and ISIS, spicing his rants with bawdy jokes and stories about his late twin brother, my law school room mate, who had been the real world embodiment of “Cheers'” Sam Malone, a hilariously insatiable but charming ladies man. We both laughed til we cried.

Finally, I had to go. We made arrangements for me to come back in three days, and he reminded me of my “assignments.” As I looked back to wave goodbye to my friend, sitting on the porch there, it seemed to me I had never seen him happier, or, since his illness, healthier. I also resolved to stop being a self-absorbed ass and visit at least once a week. I had made that pledge to myself before, but this time, I was going to keep it.

That night, I got a couple of e-mails from my friend, commenting on various news reports. He also called me, but chatting with my wife before she handed the phone to me, he suddenly said that he had to go, and we never talked. An hour later, I received the news that he was dead.

And I realized that “Bang The Drum Slowly”  had nearly run me down, missing me by a breath.

At the end of the story, the narrator, the best friend of the catcher (but not really that close a friend) recalls how quickly everyone on the baseball team went back to their selfish ways after their teammate went home to die Even the narrator, who was the leader of the effort to make the catcher feel loved and appreciated in his last days, ruefully recalls his own failing. The catcher had asked him a favor, just to send him a World Series program (the team won the pennant after he had become too ill to play), and he had forgotten to mail it until it was too late. How hard would it have been, the narrator rebukes himself, to just put it in an envelope and mail it? Why are we like that, he wonders, as he makes the audience wonder too.

It was purest luck that I happened to spend that final day with my neglected friend, giving me a privilege and a pardon that I did not really deserve. I was a good and caring friend yesterday, but where had I been all of the others? What was so important, so pressing, that it could be put aside to be with a good friend and a wonderful man who had played such a large part in my life, and who was slowly dying? What is the matter with us? What is the matter with me?

So, today, in shock, guilt and mourning, I find myself in the shoes of pitcher Henry Wiggen, the narrator of “Bang The Drum Slowly,” resolving to learn, to be kinder and more caring, and a better friend the next time.

God, I hope I remember.