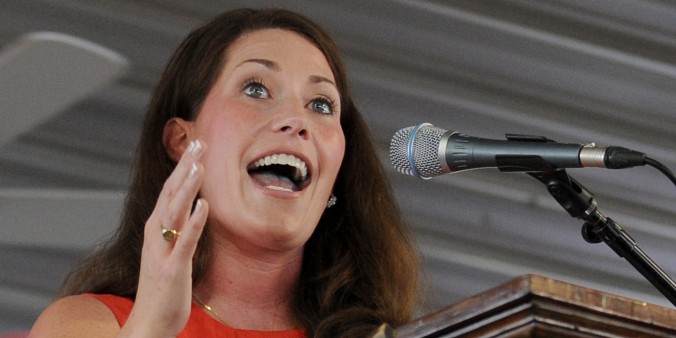 This is hard for me. Senate Minority Leader Mitch McConnell (R-Ky)is among my least favorite U.S. Senators, and conservative hit man James O’Keefe defines unethical journalism. But O’Keefe’s sneaky tactics, the smug candor of McConnell opponent Alison Lundergan Grimes’ staff and supporters, and her own blatantly misleading statements make it obvious that she and the Kentucky Democrats think that it is acceptable to lie outright about a crucial policy issue to win an election. It isn’t. Any candidate who thinks that way is unqualified for office. I’d love to see McConnell lose to an ethical candidate on his merits. or lack of them. Grimes, however, is a liar, and apparently her staff and supporters are fine with that.

O’Keefe-produced videos show five employees of the Grimes campaign, local Democratic Party affiliates and a key supporter opining that Grimes is faking her support for the coal industry out of political expediency, and will default to the national party’s anti-coal stance the second she hits Washington.

“If we can get her elected do you think she is going to do the right thing and she’s gonna try to wipe out that coal industry and go for better resources?” asks the  deceptively complicit Project Veritas videographer….great name for an operation that lies to subjects in order to acquire their trust, by the way.

“She’s saying something positive about coal because she wants to be elected,” says Ros Hines, a staffer in Grimes’ Lexington campaign office. “And in the state of Kentucky, if you are anti-coal, you will not get elected, period, end of conversation.”

“She has to say that,” replies Juanita Rodriguez of the Warren County Democratic Party. “But you know what? Politics is a game. You do what you have to do to get [elected]. … It’s a lying game unfortunately.I really don’t think her heart is 100 percent in backing coal. But she has to say she is because she will not get a high number of votes in this state if she doesn’t. But she’s got to get in there first and she’s gonna say whatever she has to say or do. And that’s the way the political game is played.””

Even more direct is New York City real estate mogul Niko Elmaleh, who has donated the maximum amount to  Grimes’ campaign. “She’s gonna fuck ‘em as soon as she gets elected,” he says.

To compound her deception, Grimes has had the  chutzpah to accuse McConnell of not being sufficiently pro-coal, and using ridiculous allegations to do it. This prompted a four Pinocchios rating from Washington Post Fact Checker Glenn Kessler.

Do Democrats really think this is how candidates for the U.S. Senate…or candidates for dogcatcher, for that matter…should get elected? Outright deception of the public? Do Republicans? Doesn’t integrity mean anything to the parties and the public? Isn’t it crucial to send the unequivocal message that this is intolerable for any candidate, of any party, ever?

It’s not a game. It’s democracy, and gaining power through lies undermines democracy, no matter how virtuous a candidate thinks her motives may be.

UPDATE: the best of the FactCheck operations, at the Annenberg Foundation, came to Grimes’ defense on this issue, primarily based on the argument that none of those caught on camera are paid Grimes staffers. Political campaigns rely heavily on volunteer staff, and presumably they work for candidates based on what they believe, and have been given reason to believe, the candidates stand for, and not because they get a paycheck. I don’t find the distinction as definitive as Factcheck.org seems to think, or that it diminishes the likelihood that Grimes is misleading voters. While my post was about the disturbing fact that dedicated supporters of the Kentucky Senate candidate seem so certain she is lying about her position on coal, I also find it difficult to believe that staff, Democratic officials and a major donor believe this without good reason.

The tone of the Factcheck.org is article troubling. The writers seem determined to defend Grimes at all cost, making the one weakly valid point about paid vs. unpaid staff, then stooping to ad hominem attacks on O’Keefe, claims that those interviewed may have been lying, and a suggestion that the tapes were doctored. Ethics Alarms has always marked this as the least biased of the fact checking groups (in sharp contrast to, for example, the partisan Politifact), but now I am not so sure.