I didn’t say it was a pleasant dream.

Hmmm, how should I describe this? I would say that a law is being used to violate the First Amendment rights of an unethical jerk who is intent on abusing them.

Or, in the alternative, Jasen Dixon may just be an idiot.

Sycamore Township, which is just outside Cincinnati, has responded to complaints by neighbors by applying various ordinances against Dixon’s unusual Nativity scene that he constructed in his front yard. It features life-size figures portraying Joseph and Mary as the walking dead, and a zombie baby Jesus, who has pale skin and pure white eyes. Here, here’s a close-up of Zombie Baby Jesus: 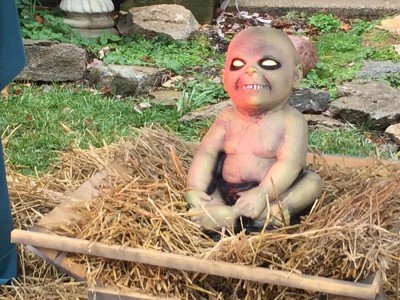 Dixon suspects that the township laws, which prohibit structures in the front or the side yard of a residence that occupy more than 35 percent of its total area, and require that the primary structure must be 3 feet from the street and 6 feet from the dwelling, are really being selectively enforced against him because his holiday display offends some people….well, almost everyone. I suspect this as well.

Poor Jason says he doesn’t mean any harm: he’s just doing the best he can to celebrate the birth of baby Jesus. “I wanted a Nativity and I worked with what I had,”  says Dixon, who manages a nearby haunted house called “The 13 Rooms of Doom.” He says his First Amendment rights are being infringed.

“I’ve lived here for 15 years and I’ve never had a violation of any kind,” Dixon said. “It’s a holiday decoration. I know if it was a real pretty Nativity scene they wouldn’t be saying anything.”

I’ll agree with that too.

I wonder if I could get Jason to agree, or admit, that he put up this horrible travesty of the Christmas story to mock it, knowing well that he was insulting Christianity, being openly disrespectful of his neighbor’s faiths, and interfering with the community’s enjoyment of a cultural holiday. The First Amendment protects selfish and inconsiderate assholes as much as anyone else, and this appears to be an example of it. If the government in Sycamore is selectively enforcing its laws to stifle Dixon’s right to be a lousy neighbor and a creepy human being, it is wrong.

I’m sure I have had less sympathy for victims of abuses of government power, but I’m tired from shopping, and can’t think of any—unless, of course, Jasen really is just trying to honor Christmas with his meager resources—zombies— the best he can. You know, like “The Little Drummer Boy, who only had a drum at Jesus’s birth. Jason’s dilemma might make a touching seasonal song at that. It might go something like this, sung beautifully by the Harry Simeone Chorale, natch:

“Stop,” they told him, “you can’t be that dumb!”
“Zombie Nativity? What moon are you from?
You’re scaring kids, and wrecking Christmas, you crumb!
We’ll call the cops so they will hassle you some.
Wait til they come, you creepy bum..
They will fine your ass, pa rum pum pum pum,
When they come.”

“No,” he told them, “you can’t make me mum.”
“I have a right to say what you think’s loathsome,
I‘’ve only zombies figures—sure they’re gruesome.
I do the best I can, so you should welcome
Christmas freedom, so stick your tantrum up your rectum.
Zombies like Christmas too so let them have some.

Let them have some.”

11 thoughts on “I’m Dreaming Of A Zombie Christmas”