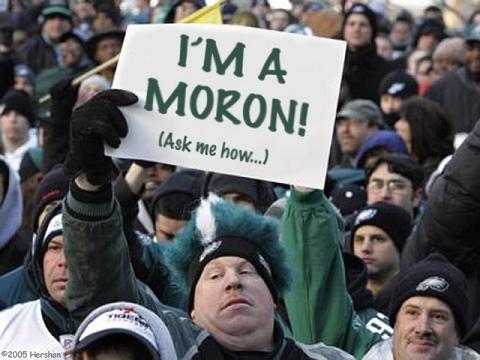 [This post took so long to write that I am posting it on Sunday. Pretty stupid.]

Every few months an ethics story erupts that convinces me that I’m wasting my time. I started writing about ethics online in disgust over the Clinton-Lewinsky scandal, which revealed to me that no politicians, few journalists and a tiny minority of the public understood the difference between, right, wrong, and a desperate rationalization. I was aghast at the vigorously nodding heads on talk shows when some ethically-challenged dolt would say that “everyone lies about sex” (so it’s okay), or that because other leaders may have had illicit sex, that made it acceptable, or that Clinton deserved special dispensation because he was an effective and popular President, or that he and Lewinsky were consenting adults, or that personal conduct was irrelevant to the job, or that other Presidents had done worse. These were all just lazy, poorly reasoned and culturally corrupting rationalizations, but nobody except a derided few seemed to know it.

So I’ve been writing about these and other ethics issues, including rationalizations, for about 15 years, and nevertheless, when something like the Patriots cheating scandal arises, I hear the same unethical, ignorant crap, as if nothing has changed. And, of course, nothing has. All I can hope to do, in conjunction with others who don’t want to see society devolve into a Hobbesian Hell, is to try to convince enough rational people that we can, by constantly explaining, arguing, and pointing the way, just keep things as barely endurably corrupt as they are now.

I got depressed just writing that last sentence.

The issue regarding the New England Patriots giving their quarterback an edge by cheating—deflating the balls so he could throw more accurately–isn’t controversial or hard to understand. If the team broke a rule that relates to sportsmanship, the fairness of the competition and the integrity of the result, and it is hard to see how it didn’t, then the NFL should punish the team severely. [ The NFL, true to its black heart, has made it clear that its investigation will not allow a resolution of this until after the Super Bowl, meaning that it hopes the controversy will deflate. I’m sure it could resolve all questions and identify the accountable parties faster if it wanted to—it doesn’t want to.] To do otherwise essentially endorses cheating. Moreover, since the team involved has a head coach who has made it clear that he is willing to cheat (having been caught before), that coach must be held accountable for the unethical culture he has nurtured whether he was directly involved in this particular episode or not. This is truly Ethics 101, Management 101, Culture 101, Sports 101—let’s just call it “101.” Yet so many, from the elite among sportswriters to the public that devotes an obscene amount of their passion, time and money to following football just don’t get it.

Start with Boston sportswriter emeritus Bob Ryan, whom I have read  since I was a child. I thought Ryan was defective when I was 12, and now I am sure of it. Here’s his unethical take on “Deflategate”:

“Whatever happened with the stupid footballs happened. The ultimate crime was the equivalent of attempted jaywalking. But it involved intent, and it involved the Patriots, and so it was the Lindbergh Baby, Julius and Ethel Rosenberg, and O.J. all rolled into one.”

There’s an unethical sentence for the ages! Let’s see:

“It isn’t ethical to violate what you think is a bad law while it is still a law, because this creates an obvious breach of the Rule of Universality: if everyone followed that course, we would have chaos and anarchy. There are bad rules and laws, no doubt about it. It must be the group—society, the culture—that decides when one of them needs to be amended or eliminated. The individual who does this unilaterally is threatening the stability of society, and that’s unethical no matter what the law is.”

“This is the rationalization of low expectations, not merely a rationalization but a life philosophy of passive acceptance of wrongdoing, apathy, and non-judgmental complicity in life’s injustices and the lowest common denominator of human behavior. The statement “It is what it is,” whether by others or oneself, must never end an ethical debate but begin it, with the essential follow-up being the question: “What is it?” Often, the answer is unwelcome but simple, and the very fact the Evasive Tautology is designed to evade. What is it? Wrong.“

That’s three rationalizations and two logical fallacies in the span of three sentences! The rest of Ryan’s essay is essentially Rationalization #39. The Pioneer’s Lament, or “Why should I be the first?” Everyone is picking on the Patriots, you see, and that’s only because they don’t like Belichick, because he cheated before (in the so-called “Spygate” scandal), so it’s really unfair because another team and coach would get away with this and nobody would care! If the cheating occurred in the play-off game that determined who would be in the Super Bowl?  Sure it would. Ryan’s readers are stupid, but they aren’t that stupid.

Now read Dashiell Bennett in the Atlantic, here. His sneering, sarcastic, corrupt analysis—he writes about “integrity” like it was some exotic luxury normal people never try, like Caspian Sea caviar— is even worse than Ryan’s, as it rests primarily on Rationalization #1, “Everybody Does It” and appeals to the worst of the worst defenses being offered as well, like “It didn’t change the outcome”—you want stupid? THAT excuse is stupid.  His anti-ethical attitude is summed up in this damning paragraph:

“First come the moralizers, who demand the ultimate punishments for the Patriots, and specifically, Belichick. (Drew Magary has a roundup of the best pearl-clutching over at Deadspin.) Bob Kravitz, who helped break the story, has demanded an immediate firing in the name of “honor” and “integrity.” At the very least, “Belicheat” should be suspended from the Super Bowl. At worst: The whole team should be removed from the big game, per the instructions of CBS’s Gregg Doyel. It’s the only way someone will learn….”

The interesting thing about really, really unethical people is that because they think ethics is for suckers, they assume that this is the normal way to think. “Moralizers” is a the favored insult for people like me—you know, those sanctimonious scolds who think people shouldn’t lie, cheat or steal, and that there ought to be consequences when they are caught at it. Bennett and his clan, and they are legion, thinks that’s ridiculous. “Pearl-clutching” suggests that caring about such things as blatant cheating isn’t manly—it’s sissy stuff. “Quit whining! If they cheat you, don’t complain, cheat them next time! That’s what men do!”

This is the attitude of assholes who are determined to build a society of assholes, and to give them their due, they are doing a good job at it.

TIME’s Jack Dickey also deflates his reputation with this defense of cheating, based on a nauseating stew concocted from Rationalization #1A. Ethics Surrender, or “We can’t stop it,” #2, The “They’re Just as Bad” Excuse, the vile #22, of course, #33, The Management Shrug: “Don’t sweat the small stuff!”, #43, Vin’s Punchline, or “We’ve never had a problem with it!”, and #44, The Unethical Precedent, or “It’s Not The First Time, ”  and, as you will see below, two more. Here’s the heart of his ethically comatose argument:

At the heart of the sentiment against the Patriots—significant enough, by the way, that the league has retained the same investigative horsepower it deployed on the genuinely odious Miami Dolphins bullying scandal—is the notion that deflating the balls constituted some sort of more grievous sin against fair play. Who could possibly believe this? Everyone lets a little air out of the pigskin, as former quarterback Matt Leinart has said. Deflated balls are easier to grip and catch; they give the offense an advantage, just like rub routes or hasty substitution patterns. No one could claim these evasions (equally deliberate, equally practiced) merit suspension. It’s gamesmanship, nothing more, and there ought to be an in-game penalty for it, if the referee susses out a slightly shriveled one. Yet grievances full of chirping and false equivalencies have owned the week.

It’s thrilling and fun to watch the tarring of an evil empire—Belichick and Brady have been so good and so ruthless for so long—but it’s toxic when it happens like this…Should the NFL conduct yet another dawdling investigation to exonerate and venerate itself, when its own bad governance is to blame? Sounds like that’s the plan. All the while, we’re stripped slowly of our sense of proportion. I’ve seen the needle and the damage done, a little part of it in everyone.

Pardon me while I do my Linda Blair imitation, and I can’t swivel my head 180 degrees, so you know what’s coming.

Asserting the rationalization of Victim Blindness attempts to shift responsibility for wrongdoing to the victims of it, who, the theory goes, should have known that their actions would inspire the conduct that caused them harm, and thus they should have either avoided doing what sparked the unethical response, or by not doing so waived their right to object to it….Clever, but nonsense. We do not judge the ethics of conduct according to the virtues, or lack of same, of its object. Rescuing a rotter from certain death is as admirable as rescuing an innocent child; horse-whipping a chiseling, cheating, wife-beating cannibal is still wrong. Predicting that another individual’s unethical conduct might follow from one’s own acts, good or bad, is irrelevant to the analysis of whether that subsequent conduct is right or wrong.Stopping or avoiding unethical conduct that I know is coming may be wise and it may be prudent, and I may blame myself for failing to do either if that was possible, but the last person who has standing to blame me for my fate is the one doing me harm. He, not I, had the last opportunity to prevent the wrongdoing, by simply declining to do it.

#47.Contrived Consent, or “The Rapist’s Defense”:

That’s at least eleven rationalizations being used by these and other ethics corrupters to say, in essence, that cheating is acceptable.

I was going to look at some of the comments on stories around the web by the corrupted, the members of the public who have been brainwashed by writers like Ryan,  Bennett or Dickey (or unethical parents, teachers, leaders and role models) into believing cheating is no big deal. I stopped;  was too upsetting, especially as it dawned on me that many of these same people were the ones arguing that there’s nothing so bad about President Obama lying about the Affordable Care Act to get it passed, because it’s gamesmanship, and everybody knew it was a lie or should have, and besides, it’s not like he invaded Iraq or something. Then I started to watch the Sunday Morning shows, and heard about six of the eleven rationalizations in the three minutes before I turned off the TV in despair and disgust. No wonder the public is stupid about ethics. No wonder it tolerates dishonesty in its leaders. No wonder so many people cheat on their taxes, their spouses, and their homework.

If we accept blatant cheating in our sports, we will be inured to it in the life of our nation, and eventually, because we cheer the cheaters, join their ranks.