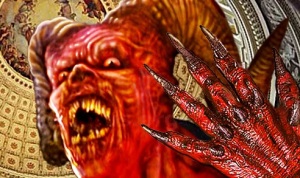 Brian Banks, the once-promising high school athlete whose life was upended by a classmate’s false rape accusation that sent him to prison for five years, is now  back on his feet, working for the National Football League, and, by the evidence of his recent profile in the New York Daily News, impressively beyond anger and bitterness. He does tell a stunning story, however, of a day in 2011 when he received an unexpected Facebook friend request from Wanetta Gibson, the woman who, for no apparent reason, did this terrible thing to him. Banks says that she wrote…

“I was hoping we could let bygones be bygones. I was immature back in the day, but I’m much more mature now. Let’s hang out. I’d love to see you. I’ve seen your picture on Facebook. You look real good. I would love to hook up.”

I’ve been trying to think up a fanciful equivalent for this “I know I tried to wreck your life, now will you please let me back into it?” request. Would it be John Hinckley Jr. asking President Ronald Reagan for a job? Edward Snowden replying to an NSA RFP? Maybe V. Stiviano asking Donald Sterling for a job recommendation? I’m not sure any of them would be as bad. “Let bygones be bygones.” Among other things, what an insult this is. How stupid does Gibson think her victim is?

Then there is this chilling statement: “I was immature back in the day, but I’m much more mature now.” Translation:  “Yes, now I’m a fully mature vicious sociopath. Don’t you want to renew our relationship?”

These are the situations where someone inevitably argues that Americans believe in redemption, and when I inevitably respond, “You are out of your friggin’ mind.” Some people, not many, but some, are bad to the bone, and the social pressure to forgive the worst of the worst—Did you read the words “I’m sorry” anywhere in that request?—is a trap, set up by those who won’t have to live with the consequences of another betrayal of trust.

Two years later, she recanted her withdrawal of her rape accusation.

40 thoughts on “Wanetta Gibson, The Limits Of Forgiveness, And The Most Unethical Facebook Friend Request Ever”