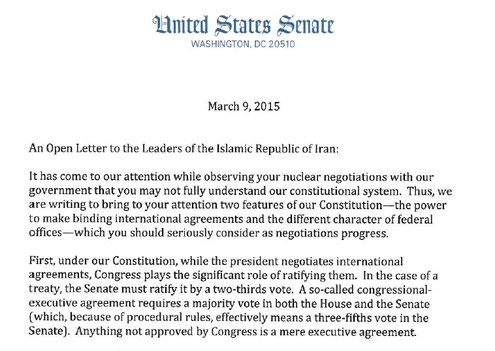 “An already heated battle between the White House and Republicans over negotiations to curtail Iran’s nuclear program grew more tense Monday when 47 Republican senators sent a letter to Iran designed to kill any potential deal.

The White House responded by accusing the Republicans of conspiring with Iranian hard-liners, who oppose the delicate negotiations, and suggesting that their goal was to push the United States into a military conflict.”

1. The letter cannot be defended as anything other than an effort to sabotage sensitive international negotiations. As such, it is direct interference with the President’s ability to do his job. The fact that Republicans, like Israel, have abundant evidence that President Obama is likely to do that job, in this case, badly and even dangerously is no justification for this unethical, unconstitutional, arrogant and offensive act. The American people elected Obama president, and with that came the authority to conduct foreign affairs and oversee negotiations with foreign governments. The letter is wrong in every way.

2. It does not matter, and should not matter, to any American whether or not they believe that a breakdown in negotiations with Iran would be preferable and safer than the kind of deal this President is likely to produce. It does not matter. The letter is per se a breach of the separation of powers, and as precedent, endangers the nation’s entire governance structure.

3. Anyone who defends this atrocious, reckless and unprofessional conduct is fully embracing “the ends justifies the means” as a principle of democratic government.

4. If he was not aware of it and did not approve it, Republican Senate leader Mitch McConnell is obligated to condemn this action, and punish all signatories,  stripping them of committee assignments related to foreign affairs.

6. If McConnell was behind it, approved it or allowed it to go forward, he should resign. Today.

[ Update: I have been informed that McConnell signed the letter. Thus #5 above is rendered moot. ]

8. All of that said, Democrats and President Obama should be estopped from protesting as if their own reckless and undemocratic actions did not make something like this inevitable. As Byron York annoyingly writes (annoyingly because I had already written almost the exact same thing before I saw his report)  in the Washington Examiner:

They have a right to be angry — but not to be surprised. There’s a war going on between the executive and legislative branches in which Obama has shown contempt for Congress’ constitutional powers, and now, in response, Congress is showing contempt for the president’s constitutional powers. It’s an unfortunate situation, but it’s what Obama has wrought…On Iran and before that on immigration, healthcare, and other matters, Obama has pushed his executive authority beyond its proper limits, on the flimsy pretense that he is entitled to act unilaterally if Congress does not pass bills he wants. Could anyone fail to anticipate that in response Congress would stretch its own authority, too?

9. Columnists and reporters whose angry indignation at the Republican letter exceeds their previous levels of criticism of the President’s executive order on illegal immigration should be forced to wear a scarlet “P”—for “partisan bias” on their chests forevermore.

10. The President guaranteed this war, as York terms it, the second he responded to the Republican sweep of the House and Senate in the mid-term elections by announcing his intention of defying the will of the voters, and refusing to collaborate with and involve Congress as the system requires to function, as other, successful, productive, competent Chief Executives have done to the country’s benefit. But in truth, he had been waging this war all along.

11. It has now escalated to a dangerous level. (It was always at an unacceptable level, because this war is itself the product of incompetence on both sides.) The Republicans are 100% responsible for that escalation, and should be held accountable. However, this episode has to be regarded as part of the horrific Obama Administration Ethics Train Wreck, in which incompetence at the top is crippling the government, and  causing dysfunction in all directions.

12. There is no question about whether this will get even worse. It will. We know this because we know that President Obama lacks the character to change, or the self-knowledge to accept his own responsibility for this disaster.

13. The only questions now are how badly the fabric of our government and its institutions will be damaged, and how long it will take to repair them.