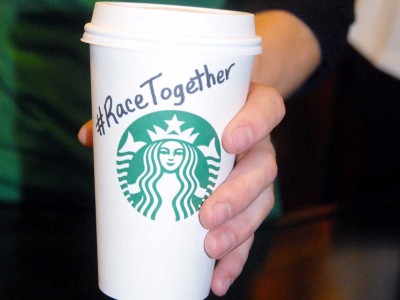 Beginning this week, Starbucks baristas will have the option of handing coffee cups to customers on which the Starbucks employee has written the words “Race Together” as an invitation to start a discussion about race in America. Friday, each copy of USA Today will have the first of a series of insert with information about race relations, including a variety of perspectives on race. Starbucks coffee shops will also stock the insert.

2. As I have been saying a lot lately, a business owner can run his business any legal way he wants, and let the market decide if they like it or not.  From a business ethics standpoint, there is nothing wrong with his plan. It’s well-intentioned, it’s good publicity for Starbucks, and it reflects well on the brand.

3. Now I, for one, do not go to a coffee bar to be challenged to discuss race issues, especially in public, and especially with strangers. Call me quirky, but that doesn’t say “relaxing” to me.

4. Moreover, you don’t want me to discuss race with you unless you are prepared to stick to facts, avoid rationalizations, and not lead with your biases. Trust me. You do not want to have that conversation. If you are going to start talking about reparations, Trayvon, “Hands up!,” affirmative action, how the Supreme Court “gutted” the Voting Rights Act, how the Academy Awards are racist, why it’s racist to require people to show as much proof that they are who they say they are in order to vote as they would have to do to rent a motel room, or how Barack Obama is the greatest President alive but has suffered unprecedented criticism solely because he is black, it will be a real quick conversation, and a painful one. Is it responsible for a CEO to place his young, idealistic, sort-of educated employees on a path to collide with someone like me? I think not. In fact, its reckless and unkind…to both of us.

5. What is the objective of such a discussion? What about race? What’s the goal? What’s the context? What are the assumptions? What’s the point? “Talking about race” is not itself a virtue if the talk is going to be without useful reference points and quantifiable objectives.

6. One of America’s problems in civic discourse is that everyone believes that their opinion is as valid and worth listening to as everyone else’s. That isn’t true. Everyone may have an opinion on race, but it is an incredibly difficult, complicated, many-layered area that has perplexed some of the greatest minds in the world. Not to be cruel about it, but what does a coffee server have to add to the debate? Why are we having this discussion? Am I supposed to enlighten him or her? Is she supposed to enlighten me? Are all Starbucks employees presumed to feel the same way about race? Is there an official Starbucks position that they have to adopt? If another employee disagrees with what an employee is saying, is that dissenting employee allowed to enter the discussion (while his customer’s coffee gets cold) or does he have to engage a customer–“Quick! Take this cup!”— to have his say?

7. The ethics verdict on this stunt is incompetence. The Starbucks CEO thinks all talk is good, when in fact most talk just confuses things and hardens misconceptions, unless the speakers are serious, prepared, knowledgeable, well-read, objective and articulate. In the matter of race, just because everyone has one doesn’t make everyone conversant on the issues involved. This has the smell of a feel good exercise that trivializes a serious and, in these times, often deadly topic. A thoughtful, careful, objective effort to make discussions about race more productive is much-needed and would be welcome. Promoting hit and run shallow exchanges on the topic while one party is distracted preparing coffee and the other has a plane to catch isn’t the way to do it, and forgive me if I add obviously.