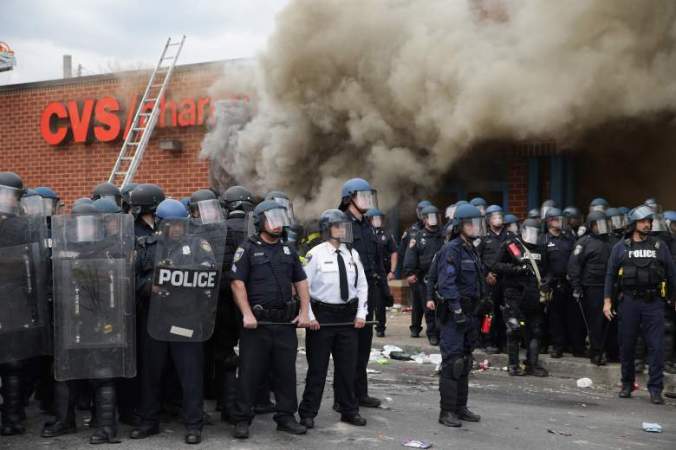 Being the mayor of any city in the throes of a race riot is a losing proposition; being an African-American mayor when the rioters are all black and the riot was sparked by the mysterious death of a black man in police custody is a hopeless proposition. Last night’s riot in Baltimore actually justified the kind of para-military response that got Ferguson, Missouri condemned by Eric Holder’s Justice Department, but that approach was politically impossible. I don’t know what I would have done in Baltimore Mayor Stephanie Rawlings-Blake’s hot seat, except hope against hope that President Obama didn’t come out with a statement that Freddie Gray could have been his son. So this is not the time to second-guess the mayor’s actions.

For the record, my assessment is that the volatile combination of acculturated black community contempt for policy authority and long-incubating and neglected racist inclinations in police departments was activated nationwide by seven years of cynical exploitation of racial divisions and distrust by President Obama, Eric Holder and the Democratic Party for electoral gain. Race riots were the predictable  consequence, and I say that with confidence because I predicted it in 2012, when Trayvon Martin’s death was elevated to a national issue just in time for the President Obama’s re-election push. Rawlings-Blake may have been part of that effort; I haven’t investigated that. She certainly inherited its results.

My verdict of incompetence in her case focuses less on her failure to prevent or contain the riots than on her inept communications skills. Leaders have to communicate clearly. If they can’t, they have a duty to learn: the skill can be taught. (I’m looking at you, W.) If they can’t communicate, their leadership ability is intrinsically crippled. Leaders who have to constantly “clarify” what they said, or “walk back” comments, or claim that they were “quoted out of context” when they were just quoted lose the public’s trust, and deserve to.  Public officials have to be careful  what they say, and how they say it, and this is a crucial, indispensable skill in their chosen field.

Rawlings-Blake held a press conference as the riots in her city were unfolding, and said this:

“And I’ve made it very clear that I worked with the police and instructed them to do everything that they could to make sure that the protesters were able to exercise their right to free speech. It’s a very delicate balancing act because while we try to make sure that they were protected from the cars, and the other things that were going on, we also gave those who wish to destroy, space to do that as well. And we work very hard to keep that balance, and to put ourselves in the best position to de-escalate and that’s what you saw.”

This statement was immediately interpreted by the news media (and everyone who heard her remarks or saw the YouTube video), as giving rioters permission to destroy. The interpretation was not unfair. First of all, she said it. Second, it echoed  the infamous remarks of New York Mayor David Dinkins during the Crown Heights Riots in 1991, when he said that he had ordered the police to let protesters “blow off a little steam.” Conservatives extrapolated her comments to be a continuation of civil rights leaders’ and liberal pundits’ rationalizations justifying the Ferguson rioting and looting, but even mainstream media commentators were perplexed. It was an irresponsible statement by definition.

Soon the mayor’s office indignantly denied the clear meaning of her words, putting out this “clarification,” which included an edited version of the statement including emphasis and bracketed words that were not spoken to show what she claims that she meant:

“I’ve made it very clear that I work with the police and instructed them to do everything that they could to make sure that the protesters were able to exercise their right to free speech. It’s a very delicate balancing act, because, while we tried to make sure that they were protected from the cars and the other things that were going on, we also [as a result] gave those who wished to destroy space to do that as well. And we worked very hard to keep that balance and to put ourselves in the best position to de-escalate, and that’s what you saw.”

Too bad you didn’t say that, Mayor.

She used “while” and “space” in ambiguous contexts, and left out that crucial “as a result.” If the interpretation above was what she intended to say, and I will generously give her the benefit of the doubt on that, then she and only she is the one at fault for not saying it. Naturally, Rawlings-Blake isn’t accepting responsibility for her own inarticulateness, for elected officials and politicians seldom do. Yesterday, she blamed the media, saying:

“The very blatant mischaracterization of my words was not helpful today. I was asked a question about the property damage that was done. In answering that question I made it very clear that we balance a very fine line between giving peaceful protesters a space to protest. What I said is, in doing so, people can hijack that and use that space for bad. I did not say that we were accepting of that. I did not say that we were passive to it. I was just explaining how property damage can happen during a peaceful protest. It is very unfortunate that members of your industry decided to mischaracterize my words and try to use it as a way to say that we were inciting violence.”

Thus Baltimore’s mayor  compounded incompetence with dishonesty. She was not “very clear,” since literally nobody understood her words to mean what she now says they did. It wasn’t a “blatant mischaracterization” of her words to quote them verbatim. Nobody “decided to mischaracterize” her words. The Mayor, an Oberlin graduate and a supposedly a professional communicator, failed, in a moment of crisis, to say what she now says she intended to say. The news media, for once, were just reporting what she did say, and they share no culpability for her incompetence or its consequences.

“I’m heartbroken and I’m disturbed about how the news media are focusing on the negativity of this city, and not looking at the great things that are going on in this city. We have young people who are out there protesting peacefully, but you’re not focusing on them. You’re focusing on those that are burning down buildings and rioting throughout the streets of Baltimore”

“I’m not sure what he thinks cameras should be focused on at a time when cars are being destroyed, lit on fire, 15 police officers are being injured and stores being looted — I’m not exactly sure what images he would like us to be photographing at this time. But it seems pretty important that authorities know what is happening in their own city.”