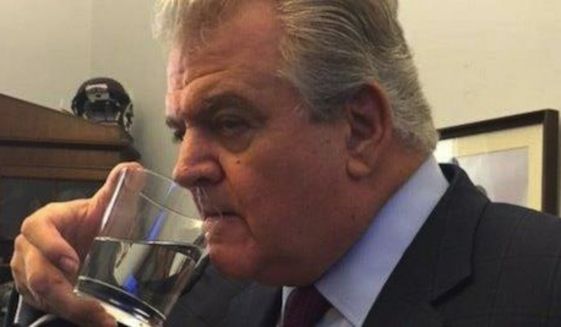 From the Washington Times:

“As Congress members rushed to touch Pope Francis after Thursday’s historic address on the House floor, Rep. Bob Brady reportedly made a beeline for the podium to swipe the Holy Father’s discarded water glass.

The Pennsylvania congressman immediately took a sip out of the glass and brought it back to his office, ABC News reported…

“The congressman is a Catholic and has immense respect for the Holy Father,” Rep. Brady’s Chief of Staff Stan White told ABC.

His office confirmed that Mr. Brady drank from the water and shared it with members of his staff and his wife, Debra Brady…The congressman kept the remainder of the water and plans to sprinkle it on his grandchildren, Mr. White said.”

Incompetent will just have to suffice.

Does every glass the Pope drinks from become like the Holy Grail? I’d be careful, if I were were the Congressman…

Brady’s antics make the entire government look foolish. There’s religious belief, and there is irrational conduct. One doesn’t have to lead to the other, but such a display should cause serious voters to pause and wonder whether a man who acts like this belongs in a high office, or even a not so high office.

UPDATE: After I posted this about an hour ago and had to run an errand, I began wondering whether Brady’s reverence for the Pope, which seems to extend to a belief that his lips are magic, also extends to accepting Catholic doctrine and what the Pope advocates, at least when these don’t conform to the Democratic Party’s platform. Here are Brady’s votes on abortion. A summary: Brady has voted for the most extreme pro-abortion positions. Reconcile that, if you will, with his water glass stunt.

I cannot comprehend Catholics who embrace this kind of hypocrisy and cognitive dissonance, nor can I respect any voter who would observe Brady and say, “Now there’s a man of integrity, wisdom and judgment!”