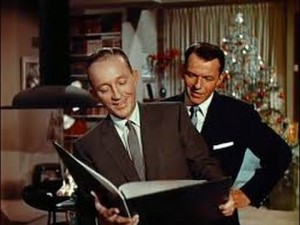 Who are those guys?

At the rate things are going, I am certain that before long no pop vocal interpretations of traditional Christmas music will be easily accessible on the radio. This is a cultural loss—it’s a large body of beautiful and evocative music—and someone should have, one would think, the obligation of preventing it. But I have no idea who.

I realized this when I felt myself getting nostalgic and sad as I listened to a series of “Christmas classics.” For one thing, they all reminded me of my parents, whose absence beginning in 2011 permanently kicked my enjoyment of the season in the groin. For another, all the artists were dead. Bing: dead. Frank: dead. Andy Williams, Nat King Cole, Dean Martin, Judy Garland, Burl Ives, Gene Autry, The Andrews Sisters, Perry Como, Elvis, John Denver–dead. Long dead, in most cases. Christmas has become a serenade of dead artists. Except for the narrow range of country music stars for those who enjoy “O Holy Night” with a twang, living pop artists don’t sing these songs. OK, Mariah Carey and Michael Buble. Not many others. Sirius-AM was desperate to find living artists that it has been playing the Seth McFarland Christmas album. Seth can sing, but I’m sorry, but it’s hard to enjoy “Silent Night” while picturing “The Family Guy.”

Current pop stars are, understandably, looking for new Christmas hits that will be identified with them, and those have always been hard to come by. Bing Crosby made annual recordings of terrible entries in the Christmas song market—I just heard a station play a few of them. Gene Autry too: many of his efforts were bombs, though I rather like this weird one:

Modern Christmas songs aren’t about Christmas anyway; they are about sex. Eartha Kitt’s “Santa Baby,” an ode to feminine gold-digging and sex for favors, has unfortunately become the template. The date-rapey “Baby, “It”s Cold Outside” also is dominating the playlist. The last bona fide Christmas hit that wasn’t about sex (or a joke, like “Grandma Got Run Over By A Reindeer”) was probably Paul McCartney’s “Wonderful Christmastime.” It isn’t just “Silent Night” that is leaving the mainstream culture. “White Christmas” is on the way out too.

The massive effort to banish Christmas carols and even pop Christmas songs from the schools is also having its (desired) effect. I wonder how many millennials can sing even one verse of “O Come All Ye Faithful” or “Hark the Herald Angels Sing”? Few of these are sung on the contemporary pop holiday albums. They will continue to fade, too: once there is no audience for Bing, Frank and Nat (Who are those people?), the only recorded renditions will be by opera singers (ARGGH! OPERA! RUUUUUUNNN!) or The Mormon Tabernacle Choir (ARGGH! CHURCH! RUUUUUUNNN!), and, for a while at least, country western singers, whose versions of the carols will convince at least half the population that those carols were never any good anyway.

Who has an obligation to stop this process? I don’t see anyone. Pop stars are obligated to make their audience happy. Radio stations are obligated to cater to modern tastes, not the tastes of their audience’s grandparents. Yes, Bing Crosby’s recording of “White Christmas “(1942) is still and forever the best-selling single in history, but that’s only because singles aren’t sold any more. Can you imagine a Christmas-themed song being a best-seller over a period of years now? Like Bing, Judy and Frank, we will never see that again. Or that America again.

We’re losing the music and the traditions they represented, as we lose the memories of the great artists who made the songs their own. What else important does that mean we’re losing? My son would say, I bet, “Nothing.” I’m not so sure of that.

Well, even though it makes me sad, I’ll be listening until my last “Merry Christmas!” to performances like these that once defined the season:

And I know Harry Belfonte isn’t dead ( just his good judgment)  but I’ll close with his Christmas classic, one of my all time favorites: