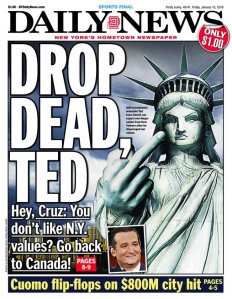 Now and then you may read here that someone is “ethically estopped” from making an argument that otherwise would be valid. The term derives from the legal concept of estoppel, the principle that precludes a person from asserting in a legal proceeding something contrary to what is implied by a previous action or statement of that person or by a previous pertinent judicial determination.

If you want an example of how I apply estoppel in an ethics rather than a legal context, look no further than New York Governor Andrew Cuomo, who decided to grandstand over Ted Cruz’s cheap shot about Donald Trump’s “New York values.” Cuomo puffed himself up with indignation, and after Cruz defined New York values as “socially liberal, pro-abortion, pro-gay marriage,  and focus around money and the media.” Cuomo demanded that Cruz apologize, saying…

Cruz was wrong to make such a statement, but Cuomo eliminated himself from the huge pool of Americans who were entitled to call for his apology, since two years ago, Cuomo himself declared the same dichotomy Cruz was asserting, and even more unethically.Then he said, of conservative Republicans,

Ethical estoppel. Cruz’s comment was unfair and offensive, but it was essentially the same statement Cuomo had made himself, and compounded by saying that anyone without “New York values” weren’t welcome in the state. How American!

Now, if Cuomo had seen the error of his ways and apologized for his own asinine effort to segregate Americans by regional values, he would have an ethical leg to stand on when he too on Cruz. He didn’t, though, and doesn’t.

13 thoughts on “Now THIS Is Ethical Estoppel…”