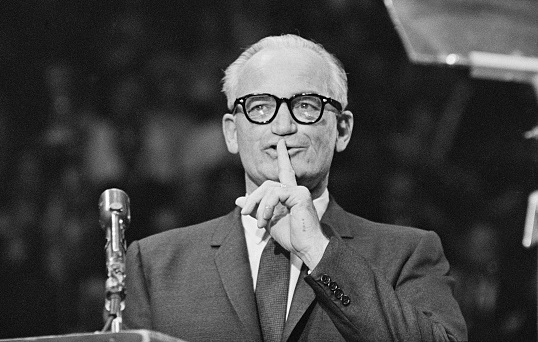 From an  edict handed down last week by the head of the American Psychiatric Association:

“Since 1973, the American Psychiatric Association and its members have abided by a principle commonly known as “the Goldwater Rule,” which prohibits psychiatrists from offering opinions on someone they have not personally evaluated. The rule is so named because of its association with an incident that took place during the 1964 presidential election. During that election, Fact magazine published a survey in which they queried some 12,356 psychiatrists on whether candidate Sen. Barry Goldwater, the GOP nominee, was psychologically fit to be president. A total of 2,417 of those queried responded, with 1,189 saying that Goldwater was unfit to assume the presidency.

While there was no formal policy in place at the time that survey was published, the ethical implications of the Goldwater survey, in which some responding doctors even issued specific diagnoses without ever having examined him personally, became immediately clear. This large, very public ethical misstep by a significant number of psychiatrists violated the spirit of the ethical code that we live by as physicians, and could very well have eroded public confidence in psychiatry… I can understand the desire to get inside the mind of a Presidential candidate. I can also understand how a patient might feel if they saw their doctor offering an uninformed medical opinion on someone they have never examined. A patient who sees that might lose confidence in their doctor, and would likely feel stigmatized by language painting a candidate with a mental disorder (real or perceived) as “unfit” or “unworthy” to assume the Presidency.

Naturally, as he is significantly responsible for much that is going haywire in the culture—CNN experts using words like “dick” on the air, a Fox News star and a Wall Street Journal editor calling each other names on Twitter, the New York Times announcing that it no longer is even pretending to follow its own ethics code—this can be partially placed at the feet of Donald Trump, though Ann Althouse’s suspicions that it is really designed to protect Hillary Clinton cannot be discarded.

I agree that professional groups that use their collective weight and credibility to assume greater influence in political matters than their biases and relevant expertise warrant are abusing their positions. I agree that psychiatrists pronouncing public officials mentally unfit for office without the same kind of examination that they would demand with a patient is a dubious practice, ripe for abuse. Still, I wonder if the situation with Trump doesn’t pose a different problem.

Trump is  a narcissist. I’m no psychiatric professional, but diagnosing Trump as a narcissist takes no more expertise than diagnosing a guy who dresses as Scarlet O’Hara and talks to himself while he wanders through Times Square with a dead goose strapped to his head as “nuts.” Hal Brown argues at the Daily Kos that reviewing the symptoms of narcissistic personality disorder (NPD) , applying them to Trump and suggesting that having certain of them to the level he does  precludes him from being fit to be president isn’t unethical at all. Brown, who is a clinician, cites two typical description of the disorder:

Simply put, narcissistic personality disorder is a mental disorder in which people have an inflated sense of their own importance, a deep need for admiration and a lack of empathy for others. But behind this mask of ultraconfidence lies a fragile self-esteem that’s vulnerable to the slightest criticism. (Mayo Clinic)

Narcissistic Personality Disorder is a disorder that is characterized by a long-standing pattern of grandiosity (either in fantasy or actual behavior), an overwhelming need for admiration, and usually a complete lack of empathy toward others. People with this disorder often believe they are of primary importance in everybody’s life or to anyone they meet. While this pattern of behavior may be appropriate for a king in 16th Century England, it is generally considered inappropriate for most ordinary people today. ( Psych Central )

It doesn’t take Sigmund Freud to read these and immediately think “Trump.” The Goldwater Rule has the perverse result of leaving a diagnosis of the obvious to amateurs (like me) and precluding trained professional from confirming it. Voters who are completely unfamiliar with the disorder need to understand and think about it when someone like Trump is nearing the levers of power. Brown insists that a mental health professional not flagging the problem when they see strong evidence that someone is dangerous may be unethical

.On the other hand, I am troubled where Brown’s way leads. Most professional organizations are dominated by Democrats, which means the members are likely to be biased. Thus there is a greater likelihood that the force of medical expertise will be used as a partisan weapon, though Brown writes as if that isn’t even an issue.  Of course it’s an issue. Why, for example, wasn’t there any need to remind members of the American Psychiatric Association about the Goldwater Rule when Barack Obama was first running for President? He is certainly not a poster child for Narcissistic Personality Disorder like Trump, but he display a lot of the traits. Also, though Brown doesn’t acknowledge this either, many U.S. Presidents, good, bad and great, have scored high on the narcissism scale. A psychiatric professional pronouncing Trump or any candidate as a narcissist is likely to be simplified by the news media and the public into a simple “he’s crazy,” with crazy equaling “dangerous.”

It ain’t necessarily so. In a 2013 article in Psychological Science (it costs 35 bucks to download it) psychiatric researchers examined  42 Presidents through George W. Bush, beginning  with data compiled by psychologists Steven Rubenzer and Thomas Faschingbauer, who had asked experts on each President to complete personality surveys on the subjects of their expertise. Then, using standard formulas from the research literature on personality, they produced estimates of each president’s narcissism level, and correlated these personality ratings with data from surveys of presidential performance  from independent panels of historians. This study concluded that “grandiose narcissism,” characterized by flamboyance, immodesty and dominance, was associated with greater  Presidential success.  The two highest scores on grandiose narcissism were Lyndon B. Johnson and Theodore Roosevelt., with FDR close behind. The lowest scores were relative White House flops James Madison and Millard Fillmore.

Taking all of this together, I have to conclude that the Goldwater Rule is necessary, even and perhaps especially as it concerns Donald Trump:

1. Amateur diagnoses, like mine,  are likely to be taken as opinions only, without the enhancement of special expertise and authority. They help inform the public, but are not so powerful that they mislead.

2. Experience teaches us the professionals can’t be trusted to issue such diagnoses fairly and objectively, and tend to create the mistaken impression that only conservatives and Republicans have mental and emotional problems. Bill Clinton and Eliot Spitzer sure seem like a sociopaths to me, but I haven’t encountered any psychiatric professionals who have been eager to say so.

3. When such a diagnosis becomes another label reducing a complex individual into a stereotype, it impedes rather than assists rational evaluation by the public.

4. Narcissism, as with other mental disorders, isn’t necessarily disabling. It was remarkable how often experts in Ken Burns’ recent documentary “The Roosevelts” described Teddy as “crazy,” while saying that he “managed it” well, in part because he knew he was crazy: mental illness, including depression, ran in his family. I’ll take Crazy Teddy as my President any day. I’ll take Teddy now, dead and all. How I wish we had that option.

20 thoughts on “Is “The Goldwater Rule” Necessary?”