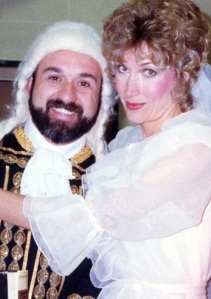 Well, sure it’s OK to impersonate a judge ON STAGE…

The Illinois Attorney Registration and Disciplinary Commission is asking for the immediate suspension of a judicial candidate Rhonda Crawford, who is running  for a judgeship covering parts of Chicago and its suburbs. The request asks the Illinois Supreme Court to block Crawford from becoming a judge if she wins the election, which is likely, since she is running unopposed. The reason she has been deemed unfit to be a judge is that she already pretended to be one, in essence impersonating a judge and ruling on cases in traffic court.

Crawford admitted last month that she wore a judicial robe and sat at the bench as part of a “shadowing process”  under the direction Judge Valarie Turner, who was reprimanded and  reassigned to administrative duties after pulling the stunt. Near the end of the afternoon court call, Judge Turner announced that “we’re going to switch judges” and gave her judicial robe to Crawford. Crawford didn’t correct the misstatement, and began acting as the judge. Judge Turner, who appears to have taken leave of her senses, told the prosecutor earlier in the day that Crawford was a judge, and Crawford did not correct the misstatement. When an officer in the courtroom congratulated Crawford on her judgeship, Crawford did not correct him, either. Judge Turner later told the presiding judge investigating the incident that she thought Crawford really was a judge, which is odd since she was employed as a law clerk and staff attorney, and real judges tend to have their own robes while not requiring second judges to stand behind them.

Crawford was fired after the incident. The ethics commission then brought charges against her in record time. Needless to say, pretending to be a judge is a violation of many ethics rules for lawyers, including the ones prohibiting dishonesty, intentional misrepresentation of material facts, and conduct prejudicial to the administration of justice. Unethical lawyers cannot be judges, because they have this funny tendency to be unethical judges.

Despite her obvious unfitness,  Crawford refuses to remove her name from the ballot, saying through her campaign,  “When people make honest mistakes they should not be crucified.” Wait, did the ethics commission say it was going to crucify her? Wow. I mean, masquerading as a judge and illicitly ruling in cases is bad, sure, but that’s barbar… Oh. OH, it isn’t going to crucify her! It just says that lying lawyers without the sense to know that lawyers who act like a judge and assume the authority of one in court without being a judge have no business running for a judgeship. . Whew. I knew they were strict in Chicago, but crucifixion seemed pretty extreme. Prohibiting a lawyer who fakes being a judge from becoming a real one isn’t strict at all. It’s necessary.

I’m curious: what would she call it? It seems like the only other explanation is that she’s stupid, and that’s not exactly a qualification for a judge either.