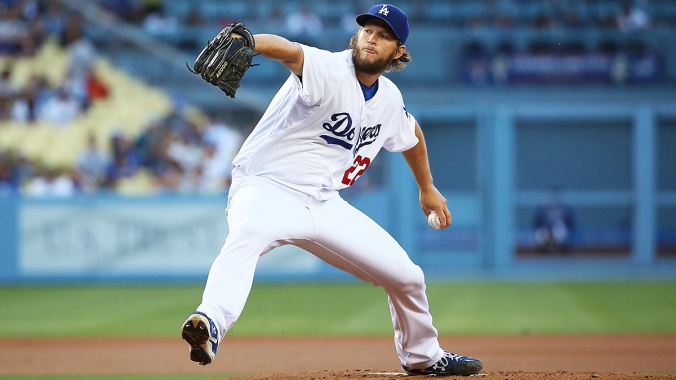 “Hey, Kershaw! Martina wants to know why you’re afraid to give us your position on fracking!”

“So many athletes are afraid to use their platform to do the right thing and speak what they feel, and that’s very depressing.”

—Tennis legend Martina Navratilova to approving New York Times sports reporter Juliet Macur, as the former tennis great prepared for her keynote speech at a human rights event at the Department of State.

Wrong, Martina. There is no “platform.” You earned credibility and influence regarding social and political issues by intelligently and boldly standing up for your own rights and privileges, on issues that affected you directly and about which you had an important perspective and a legitimate reason to speak out. Female athletes. Discrimination. Gay rights. Feminism. You had credentials and authority in all of those areas, and using your status as a sports star to spark intelligent debate was responsible and fair.

Once you had established your credibility, analytical abilities and skill at articulating issues while taking informed positions on them, then you had earned added legitimacy separate from your athletic prowess and stardom. You’re a smart person: smart people’s informed opinions should be listened to and considered no matter what the topic. Many other athletes have expanded their legitimate authority and influence this way. Muhammad Ali. Kareem Abdul Jabbar. Ted Williams. Billy Jean King. Bill Bradley.

Athletic stardom, however, confers no more assumed expertise regarding issues unrelated to sports than being a paper-hanger or a busboy. The difference is that famous athletes, like famous singers and actors, are admired and idolized by many people, especially among the young, who are incapable of resisting the siren influence of their heroes. There is nothing good about this, and everything wrong about it. Tom Brady supports Donald Trump, and the only reasonable reaction to that is to conclude that Tim Brady is a moron. However, that’s not how blank-slate sports fans react to his endorsement. For too many of them, the sequence is pure cognitive dissonance:

1. I love Tom Brady, who is a great quarterback.

2. Tom Brady says that Donald Trump is the berries.

3. I don’t understand politics and have no time for it, but I understand football.

4. In football, I trust Tom Brady.

Nobody should care who Tom Brady supports for President. It is irrelevant. Nobody should care what the Dixie Chicks think about foreign policy, or what Kate Upton thinks about global warming. None of these people—great at football, terrific performers, va-va-voom!—have any relevant credentials on these topics whatsoever, and are abusing their fame, position and influence by shouting through an outsized megaphone.

What Martina Navratilova is saying is even worse. She is saying that just because a pro athlete can, he or she is doing the “right thing” by shooting off their ill-informed, under-educated, unjustly admired mouths in public, on the field, or someplace else. She is saying that simply because these individuals have athletic talent, that alone is sufficient justification to inflict their half-baked political and social views on important debates, influencing the weak-minded and warping public opinion. Indeed, she said, they should, and when they don’t, it depresses her.

Justice Ruth Bader Ginsberg, as could have been predicted, just apologized for her statement calling Colin Kaepernick’s stupid protest against the National Anthem “stupid.” She was 100% correct in that assessment, but Supreme Court Justices are not on the court to pass down gratuitous judgments, however deserved, on ordinary citizens. She abused her position, just as President Obama abused his by professing his admiration of Kaepernick’s stunt.

The 49ers quarterback in question, however, is also abusing  his position, not doing “the right thing.” His public statements show that his comprehension of the complex issues his “protest” involves exist on an infantile level. He has been unable to add anything of substance or illumination, yet he has spawned disciples and imitators in the NFL, on college teams, and even in high schools, by people who are relying on his imaginary authority. How is that “right”? How is that helpful? All it does is make intelligent discourse more difficult.

Because of her own bias toward athletes, Martina Navratilova is, incredibly, saying that the ability to serve an ace or throw a pass ( and, presumably, to sing a ditty or dance a jig) is enough to justify an individual disproportionately influencing public opinion on topics where they have no real insight whatsoever–in short, the right to make the public dumber.

Well, Martina, the fact that you think that’s a rational position just eliminated any reason I might have had to care what you think about anything else.

19 thoughts on “Unethical Quote Of The Week: Martina Navratilova”