Daniel L. Byman, a Brookings Institute researcher, authored an article on the organization’s site that would be fun to dissect in its entirety, but I have promises to keep, and miles to go before I sleep. I also have confidence that any half-objective reader can easily see through it without my assistance. Byman is determined to show that radical Islamic terrorism is nothing for U.S. citizens to get their panties in a bunch over, and like so much coming out of places like Brookings these days, his essay is part brief to absolve President Obama from all criticism. Byman also excels in torturing statistics to make his case, leading to the analogy in question:

“With this picture in mind, the challenges facing the United States [in dealing with terrorism] can be broken down into three issues. The first, of course, is the real risk to American lives and those of U.S. allies. In absolute terms, these are small in the United States and only slightly larger in Europe. The average American is more likely to be shot by an armed toddler than killed by a terrorist.”

I’ve had this quote stalled on a potential post list for a while, but the recent discussions here about argument fallacies revived it.

How many things are wrong with this analogy? Let’s see:

1. Byman, an alleged scholar, misstates the information from his source, which itself was being dishonest. He links to this article in the Huffington Post, which was titled,  “Toddlers Involved in More Shootings Than Terrorists in 2015.”  It was, as you might guess, an anti-gun ownership article, itself using sloppy reasoning and fallacious arguments, the main one being, in essense, “Why are Republicans clamoring to regulate Muslim immigration but unwilling to regulate guns?” Even the HuffPo piece, however, didn’t assert that “the average American is more likely to be shot by an armed toddler than killed by a terrorist.” Cherry-picking statistics and time-frames to make a false argument is bad enough; using the harvested cherries to make a general assertion is the worst of scholarly flim-flam.

2. As he does throughout his article, Byman omits the major terrorist attacks—the Twin Towers and Orlando—as anomalies. He never quite takes the next step of arguing that because they were anomalies, policies designed to prevent similar attacks are over-reactions; those arguments have been reserved for shameless ideologues like Michael Moore, whose favorite bad analogy is that automobiles kill far more Americans than terrorists, so it is silly to be afraid of terrorism when we accept the risks of driving. Leaving out large data points that defeat your argument is another fallacy, however: the Texas Sharpshooter, drawing a circle around where your bullets strike and calling it the target.

It’s a good thing, because your chances of being killed by a car driven by a toddler, or a plane hijacked by one, are exactly zip.

4. An average American has absolutely no chance of being shot by a toddler either. I don’t, for example. If you don’t have a toddler in your home, don’t own a gun and aren’t an idiot who keeps your gun loaded and within reach of said toddler (or don’t share your home with such an idiot), then you are completely safe from gunslinging tw0-year-olds. Any American, however, who ventures out of doors could be a victim of terrorism. The Pentagon was attacked less than five miles from my home.

5. Byman uses the term “American,” but appears not to be concerned about Americans abroad, who have been killed by terrorists. I can find no indication that any American has been killed or wounded abroad by armed toddlers.

I admit, I’m not sure how to categorize this…. 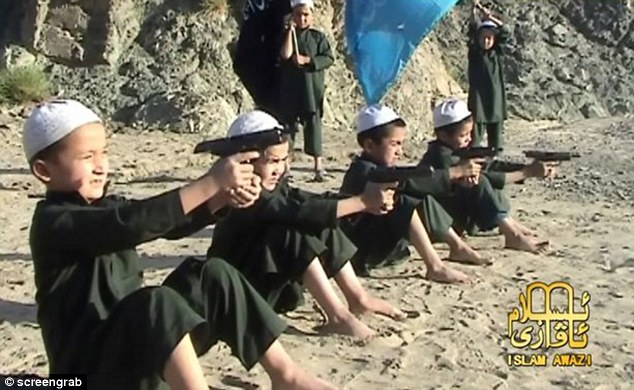 Steve Green, one of Glenn Reynolds’ co-conservative bloggers on Instapundit, called Byman’s analogy “fake news.” I agree that bad statistics (“Women earn 77% of what men do for the same jobs;” “50% of marriages end in divorce”), are fake news. Are bad analogies fake news? No, but they are unethical arguments. Brookings has a reputation as a think tank, meaning its scholars and researchers are supposed to be smart. They are also supposed to be ethical. It’s a liberal think tank, so expecting it to be objective may be too much, but Byman’s toodler-terrorist analogy is just plain stupid, as well as misleading. Either he is stupid, or he is trying to decieve people who are.

Either way, Brookings shouldn’t have allowed that analogy to pollute its website.