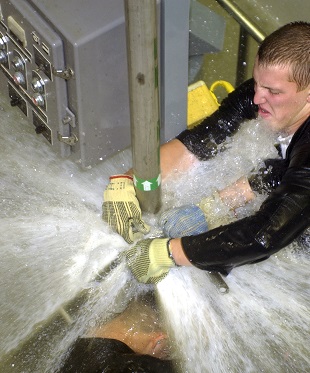 From The Daily Caller:

In the final hours before his resignation, now-former White House National Security Adviser Michael T. Flynn said he “crossed no lines” in his discussion with Russia’s ambassador, but ultimately he was most concerned about the steady stream of leaks to reporters based on classified information.

“In some of these cases, you’re talking about stuff that’s taken off of a classified system and given to a reporter. That’s a crime,” Flynn told The Daily Caller News Foundation Investigative Group during a telephone interview from his White House office on Monday.

“You call them leaks. It’s a criminal act. This is a crime. It’s not just a wink and a nod,” Flynn said.

Signature significance: any time an official under fire claims that he”crossed no lines,” he or she is asserting The Compliance Dodge, Rationalization #6 on the list:

Simply put, compliance with rules, including laws, isn’t the same as ethics. Compliance depends on an individual’s desire to avoid punishment. Ethical conduct arises from an individual’s genuine desire to do the right thing. The most unethical person in the world will comply if the punishment is stiff enough. But if he can do something unethical without breaking the rules, watch out!

No set of rules will apply in all situations, and one who is determined to look for loopholes in a set of laws, or rules, or in an ethics code, so that he or she can do something self-serving, dishonest, or dastardly, is likely to find a way…

In an earlier version of #6, this was called the Al Gore Dodge, in honor of then Vice-President Gore, who had been caught engaging in some of the slimy Clinton administration fundraising machinations, and  justified his conduct by arguing that “no controlling legal authority” prohibited what he did, which was to raise campaign funds  from his office in the White House. Flynn lied to the  current Vice-President and attempted to cover-up his conversation with the Russian ambassador. The FBI was spying on him at the time, which raises other issues. But even if the FBI’s surveillance was a part of a rogue operation by Sally Yates to take over the government and make Barack Obama King, it doesn’t change what Flynn did, or make his conduct any more acceptable.

Yup, no doubt about it, leaks are illegal, unethical and indefensible, but when the information illegally leaked shows that you have acted in a wrongful and untrustworthy manner, you don’t get to claim that the leakers are the problem. No, unethical leaks proved that you are the problem. Flynn’s complaints show that he is untrustworthy and ethically inert, and his many defenders in the conservative media are proving themselves similarly handicapped.

19 thoughts on “The Flynn Fiasco: Flynn Doesn’t Understand That Ethics Thingee, And That’s Reason to Fire Him All By Itself”