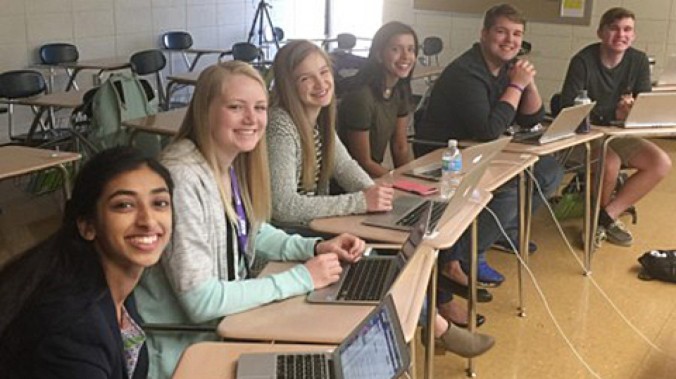 Why are these students smiling sweetly? Because they sent the message to their teachers to be wary; after all, there’s a lot of dirt on the internet…

Seemingly every one is cheering the Pittsburg High School (Kansas) students on the school paper who investigated their newly hired principal, found her credentials to be dubious, and forced her to resigned from her $93,000-a-year job. You can read the story here and here.

For the purposes of Ethics Alarms, I’m not interested in the principal at all. What matters here is that journalists, teachers, TV talking heads and everyone else commenting on the story are proving themselves ignorant of basic ethical principles, like the fact that conduct that happens to result in something desirable doesn’t make the conduct appropriate if it wasn’t ethical at the outset, aka “consequentialism leads to bad lessons and bad ethics,” and “the ends justifies the means.”

“Pittsburg journalism adviser Emily Smith said she is “very proud” of her students. “They were not out to get anyone to resign or to get anyone fired. They worked very hard to uncover the truth.”

Emily Smith is too incompetent and ethically confused to advise aspiring student journalists or any other students. The students “wanted be assured that she was qualified and had the proper credentials,” according to the student editor of the paper. That’s not their job, their duty, or their business. They aren’t journalists; they are students learning about journalism. Determining if the new principal was qualified was entirely the responsibility of the the Pittsburg Board of Education, which botched its job and approved hiring the principal at its meeting March 6. That the students did the due diligence the Board failed to do is being used as cover by the Board: Everything worked out because of these great students, who we have educated so well!

A group of students decided to see if they could dig up dirt on their principal. Do schools really want to sanction that, promote that, encourage that? Kids don’t like a teacher, so they should look online for convictions, scandals, social media postings, nude photos and more that will drive that teacher out of school and out of town—really? That’s the conduct we want to see all over the country? Sometimes what they find might be legitimately disqualifying–YAY!—and sometimes–most of the time— it might be rumor, gossip, or mistaken. We want to trust teenagers to decide which should be publicized and which should not be?

The students should be disciplined, so the message is sent that even if the lazy, unprofessional, incompetent adults who run their school can’t do their jobs properly, students do not have the option of taking over those responsibilities. They should be told that doing opposition research on school personnel is forbidden, no matter what it uncovers.

Meanwhile, everyone connected to the botched vetting process of the ex-principle should resign.

Everyone else should stop acting as if the students’ conduct was courageous, desirable, and peachy keen. It wasn’t. It just happened, this time, to make up for the derelictions of duty by the Board, and uncover a fake educator. That still doesn’t make what they did right, and the thoughtless and ethically ignorant commentary has allowed a terrible precedent to be set.

This is an ethics train wreck all around.

106 thoughts on “In Kansas, A High School Ethics Train Wreck: An Unqualified Principal, Unethical Students, And A False And Dangerous Lesson About Consequentialism”