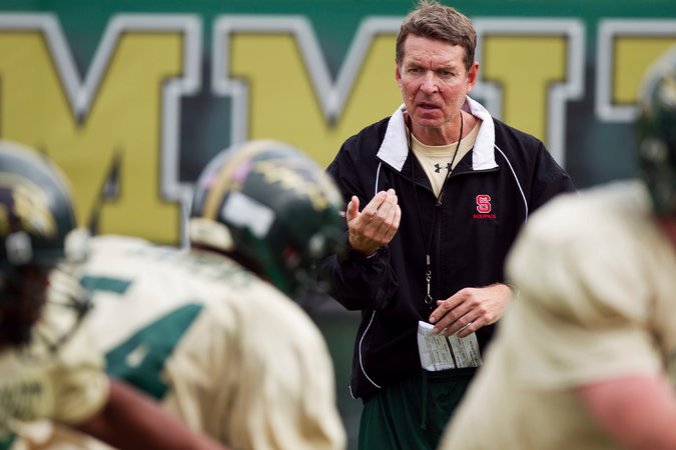 …but he felt really guilty about it, so that’s OK.

The New York Times had a very strange sports story yesterday. Its subject was the late Don Horton, a prominent assistant coach at Boston College and North Carolina State for nearly 20 years who was diagnosed with Parkinson’s disease but was also experiencing symptoms linked to chronic traumatic encephalopathy, or C.T.E., a degenerative brain disease caused by repeated hits to the head strongly linked to football. The sensitive reporter, Bill Pennington asks,

“Was his deteriorating health, Horton wondered, a consequence of his many years as a football lineman?” Even worse, he worried, was he responsible for exposing hundreds of players to the kind of head trauma now impairing his life? After all, as he had recruited and encouraged scores of athletes to play major college football….There was only one way to be sure if he had C.T.E. His brain would have to be examined post-mortem, the only way to confirm the disease since there is no reliable test for the living. At first Horton balked, but as his cognitive difficulties intensified, he relented and even insisted that the findings of his brain examination be made public.”

The Times article makes this sound like a noble and brave resolution of his crisis of conscience. It was not, however. Having his brain dissected after his death was no sacrifice at all; Horton would be dead, of course.  In the meantime, Horton, despite his symptoms and his wife’s investigation into them, continued sending young men out to get their brains beat in.

In 2009, seven years before Horton died, [Horton’s wife] called Chris Nowinski, a co-founder and the chief executive of the Concussion Legacy Foundation, and told him that she thought her husband had C.T.E. She also raised her suspicions with Horton’s doctors, but they said that, even if true, it would not change the course of his treatment.

“He never missed a day of work and still produced great offensive linemen,” said Jason Swepson, an assistant coach at North Carolina State at the time. “You could see him struggling sometimes, but he never opened up about it because, I think, he didn’t want to feel like he was letting the group down.”

At home, however, Horton’s illness was leading to a variety of changes, physically and philosophically. His daughters, Libby, 14, and Hadley, 9, had begun playing soccer, but Horton pointedly refused to allow them to head the ball in games or in practices, aware that some studies had linked heading to brain injury.

“Don told them, ‘If I ever see you head the ball, I’ll run onto the field and yank you off myself,’” Maura said.

Although Horton kept his misgivings about football’s potential consequences within his household, he talked about it regularly.

“Don would ask, ‘Are we just carrying this cycle on?’” Maura Horton said. “That was a question I couldn’t answer. But it’s definitely the right question to ask.”

It’s not just the right question to ask, it was a question with an obvious answer, and both Hortons knew it. YES he was just carrying the cycle on. YES, he was continuing to coach college players when he had first-hand, personal knowledge of the horrible fate in store for some or many of them as a result, and said nothing. “Was he responsible for exposing hundreds of players to the kind of head trauma now impairing his life?” If he refused to let his daughters head the ball while playing soccer, we know he was responsible, and so did Coach Horton. Was he in denial? Was he willing to let his player risk crippling cognitive impairment because he wouldn’t and couldn’t give up the only job he knew? Why does the Times suggest that there was any question about his culpability or breach of duty?

The tone of the the Times article is ethically-unhinged. Even as Horton is described as continuing to coach while experiencing the ravages of CTE and withholding that knowledge from his players, he is portrayed as a noble and thoughtful man:

Over time, however, as more neurological functions began to fail, Horton, in quiet moments at home, accepted that he could have C.T.E. and that it might even present an opportunity.

By donating his brain, Horton believed he could aid the science and, ultimately, perhaps help people evaluate whether to play, or continue playing, the game.

And by waiting until he was dead, Horton could rationalize continuing to risk the brains and lives of scores of unsuspecting young athletes who trusted him. After all, he didn’t know. He wasn’t sure. In ethics and law, this is called contrived ignorance.

It gets worse. As the CTE symptoms make coaching at college too difficult, Horton left North Carolina State,

“…but he felt the pull of the game. He became an assistant coach at a high school a few miles from his home in Raleigh. Despite his inner conflict, Maura Horton figured, the game and coaching were too ingrained for him to turn away.”

Wonderful. He “couldn’t turn away,” so he began encouraging high school players to damage their minds by playing football.

When Horton died a few years later, his wife did have his brain tested for CTE. The test came back positive. She could hardly have been surprised.

There is not a hint of criticism of Horton or his family in the article; nothing but sympathy, because he died, and because he “wrestled with a guilty conscience,” as if there is some virtue in knowing you are doing something wrong and feeling badly about it even if you keep doing it. There isn’t. From the article:

Numerous former players and colleagues said Horton had not raised the issue of C.T.E. with them. At the same time, they were not surprised he was worried for them.

“When I heard about his C.T.E. diagnosis, my first thought was that Coach Horton was probably more concerned about us and feeling guilty about pushing guys into the game,” Scott Dragos said. “I figured he’d be thinking of others first.”

I can excuse Horton ethics blindness if I convince myself that CTE disabled his ethics alarms. The Times writer and Horton’s wife have no such alibi, however.

4 thoughts on “When Ethics Alarms Don’t Ring: A Coach With CTE Continues To Allow Young Players To Risk Brain Damage”