1. I am puzzled that no respected journalism source—assuming arguendo that there is one—hasn’t taken on the New York Times’ alleged list of President Trump’s “lies,” which was in my Sunday Times and released on-line earlier. I will do it today, but it shouldn’t fall to me, or other similarly obscure analysts. Why, for example, hasn’t the Washington Post taken this golden opportunity to prove how biased, dishonest and incompetent its rival is? Because, you see, the list is disgraceful, and smoking gun evidence of the Times’ abdication of its duty to its readers, except its own perceived duty to give them around the clock Trump-bashing.

The other thing I’m puzzled about is why I continue to subscribe to the New York Times.

2. One possible reason: The Sunday Times is now a weekly collage of the various derangements, false narratives and  obsessions of the Left, and worth reading just to witness how 1) bias makes you stupid and 2) how unmoored to reality one can be and still be judged worthy of op-ed space. Here, for example, is “Black Deaths, American Lies” (the print title), a screed by Ibram X. Kendi, a professor of history at American University in Washington, D.C. (Disclosure: I was also a professor at American University. But I was an honest and apolitical one.)

The first line is, “Why are police officers rarely charged for taking black lives, and when they are, why do juries rarely convict?” This is deceit: an honest scholar wouldn’t have written it, and an ethical editor wouldn’t have allowed it to get into print. The sentence implies that officers are less rarely charged and convicted when they take white lives, and this is not true. In the print version, the article is headed by a touching photo of a street memorial to Mike Brown, whom we now know got himself shot. The Black Lives Matter narrative that Brown was murdered is still carried on by racist activists, ignorant members of the public, cynical politicians  and unethical figures like Kendi, who lend their authority to divisive falsehoods.  Kendi then focuses on the Philandro Castile shooting, as if its facts support his thesis. They don’t. First, the officer was charged, though he shouldn’t have been. Second, we have now seen the video, which clearly shows that after telling the officer that he had a gun, Castile reached into his pocket and began pulling out his wallet as the obviously panicked officer shouted at him not to pull out his gun. Just as the video proves that the officer was unfit to be a cop, it shows that he was in fear of his life and why. He could not be convicted of murder on that evidence. Never mind: The professor writes,

“Many Americans asked this question when a Minnesota jury decided that Philando Castile was responsible for his own death and that the officer who shot him, Jeronimo Yanez, did nothing wrong. Many Americans asked it again a few days later, when the police released the seemingly damning video from the dashboard camera of Officer Yanez’s patrol car…They cannot help blaming Mr. Castile, even though he calmly told the officer about his registered gun, even though he never pulled it out, even though he had been stopped by officers 49 times in 13 years.”

The only word for this is unconscionable.  The jury decided that the officer was not guilty of murder, and that’s all it decided. There is no “the v ictim was responsible for his own death” verdict. Nonetheless, the video demanded a not-guilty verdict. It also demands civil damages for the victim’s family and the firing of the officer. The fact that Castile, without being asked, told the officer that he had a gun and then reached into his pocket got him shot; it doesn’t matter how calmly he said it. It doesn’t matter in the determination of guilt whether Castile pulled the gun out; what matters is that the officer thought he was pulling it out, and was obviously in fear of his life. Either the professor is bone-ignorant about criminal law, or is intentionally misleading his readers.

Finally, how many times Castile had been stopped is no more relevant to the matter of the officer’s guilt than what breakfast cereal he liked.

Earlier, the professor plays numbers games by writing that “black males aged 15 to 34 were nine times more likely than other Americans to be killed by police officers last year.” Here is the number that matters: in 2016 963 Americans were shot, and 233 of them were black. More than twice as many were white.

3. I was going to write a full post about the school that photoshopped  and edited Trump quotes and slogans out of its student yearbook, but even worse tales intervened, which is itself disturbing.

Wall High School in New Jersey eliminated all references to President Trump, including legends on T-shirts, in its annual yearbook. The reason wasn’t that the slogans and quotes violated any policies, dress codes or yearbook requirements. The reason—obviously–was that the faculty supervisor is a member of “the resistance,” and somehow thought this was justified. This means that the teacher cannot be trusted to teach or supervise students.

Grant Berardo, a junior at the school, took his school pictures wearing a navy blue “Make America Great Again” shirt from the campaign. His photo  was digitally altered to appear as a solid black shirt. 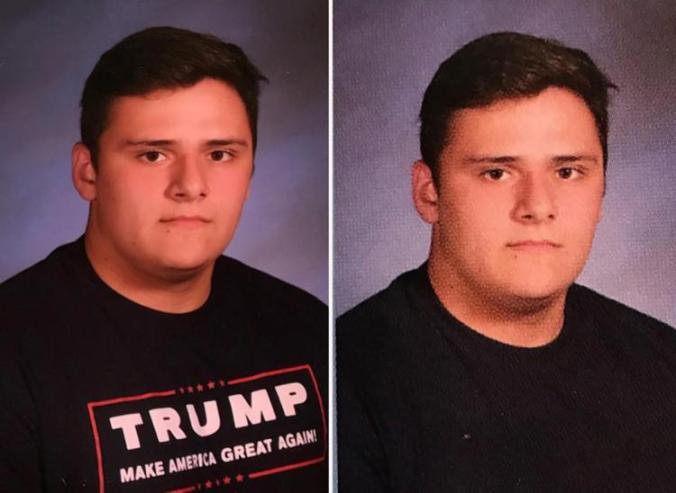 In a weasel letter to parents, Superintendent Cheryl Dyer of  the Wall Township Public Schools, blamed “mistakes.” Although even she couldn’t deny that  photoshopping of  the T-shirt was an accident, she blamed the others on “carelessness or lack of attention to detail or lack of sufficient proofreading.”

Thus do our young learn that adults in authority lie to avoid accountability.

“I do not believe that it is possible to create a yearbook of 248 pages, thousands of pictures, names, and lines of text and have it be error free,” said Dyer, irrelevantly. She then listed other mistakes and typos, as if this explained what was self-evident political censorship.

“That being said, I cannot allow the intentional change that was not based on dress code to be ignored. I am the Chief School Administrator in this district and I take responsibility for the actions of those who are employed here. Therefore, I have determined that a re‐issuance of the yearbook is necessary,” she concluded.

Digital media teacher Susan Parsons,  the yearbook adviser, was suspended with pay because of the incident. That’s right: a teacher imposes her political views on the students and the yearbook, as well as engaging in unethical and deceptive publishing practices, but still has her job.