In a seventh grade English class at St. Charles Borromeo Catholic School in Port Charlotte, Florida, the teacher was presenting Mark Twain’s “Tom Sawyer,” using an uncensored version, which is to say, “Tom Sawyer.” The classic novel, like its larger, more ambitious cousin “Huckleberry Finn,” uses the now taboo “n-word” in a society today that should be too sophisticated and wise by now not to know that declaring words taboo is ethically and intellectually indefensible. One African-American community website’s news report on the incident states, “Anyone who has read an unedited version of those books know how racially insensitive they were.” Well:

As described in the letter above, when members of the class read the book out loud and the word “nigger” was uttered, the students began “acting up,” laughing, making comments, and generally acting like undisciplined 7th graders, which they were. When the teacher could not calm them down, she improvised a creative but risky solution: having the children repeat the word over and over again. The idea, obviously (though not sufficiently obvious for any of the media reports to figure out) was to rob the “taboo” word of power by repetition. It’s an old linguistic trick that kids should be familiar with (i know I was): when any word is repeated enough, it becomes just a sound, which is all any word is. (This device becomes the climax of the excellent horror film “Pontypool,” in which something causes the English language to become deadly, destroying everyone’s brains.) END_OF_DOCUMENT_TOKEN_TO_BE_REPLACED

Over on his blog, Prof Turley was sufficiently disgusted by this that he has devoted two posts to eviscerating it in his usual professorial fashion, here and here. I encourage you to read both, though this is another one of those incidents where if it has to be explained to you what’s wrong, you probably are beyond help anyway. Still, Turley’s brief is impressive, and Ethics Alarms will just add a few (well, may be more than a few) points:

Finally, when someone of Rep. Swalwell’s amply demonstrated intellectual and ethical deficits declares anything “stupid,” the Cognitive Dissonance Scale comes into play. [ADDED: This principle should also apply to any journalist or publication who resorts to Swalwell as an authority or source. For example, we have Vanity Fair writing today, “The chamber under Kevin McCarthy, and with an emboldened right flank, may ‘exist exclusively as a vessel state of MAGA nation,’Rep. Eric Swalwell tells Vanity Fair.” ]

Ethics Dunce? Incompetent Elected Official? Unethical Tweet? Unethical Quote? Bad analogies? The Great Stupid exemplified? All these and more apply to Swalwell’s outburst. And this man is a lawmaker. Re-elected by a landslide. 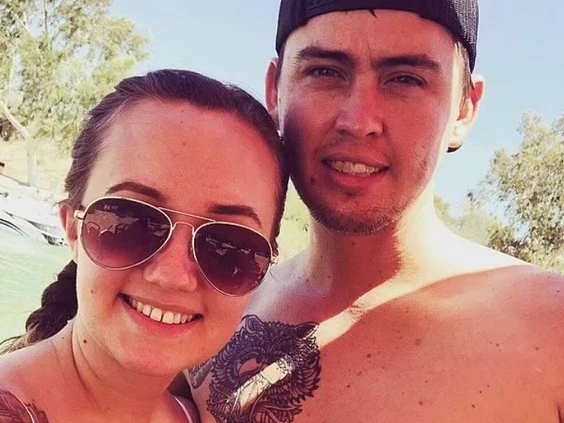 Has it really been so long? Ethics Alarms hasn’t had a Naked Teacher Principle outbreak in more than three years! Oh, we’ve had related ethics tales of a naked Congresswoman (Katie Hill), a Santa in a MAGA hat, a naked ex-Miss Kentucky teacher who’s an idiot. a too-sexy firefighter scandal, the unfairly fired naked nurse, and this year’s ridiculous Cross-Dressing Future Congressman Principle  involving ex-GOP House member Madison Cawthorne. No authentic Naked Teacher Principle (NTP), however, which states that a secondary school teacher or administrator (or other role model for children) who allows pictures of himself or herself to be widely publicized, as on the web, showing the teacher naked or engaging in sexually provocative poses, cannot complain when he or she is dismissed by the school as a result.

END_OF_DOCUMENT_TOKEN_TO_BE_REPLACED

That’s former Houston-area middle school teacher Marka Bodine above. Isn’t she pretty? Much too pretty to have to be in an icky old jail. So despite the fact that she was convicted of grooming, harassing, raping and continuously sexually abusing a 13-year-old student until he was 16 years old and finally alerted authorities, Bodine was only sentenced to to 60 days in jail with 10 years of probation. Shades of the infamous 2005 case of Debra Lafave, another sick but comely teacher who raped one of her 14-year-old students! Her lawyer successfully convinced the judge that their client was “too pretty for prison,” and honestly, who can argue with that? Here’s Debra: 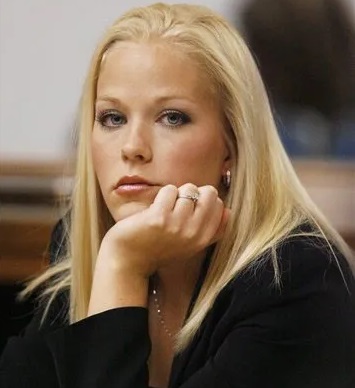 As you can see, Marka isn’t quite the hottie that Debra was, so it’s only fair that she got some jail time. But wait! There’s more! Because Marka had given birth shortly before her sentencing (the baby was not her rape victim’s—Whew!— that would be the saga of teacher rapist Mary Kay LeTourneau), Harris County Judge Greg Glass postponed her imprisonment for a full year. END_OF_DOCUMENT_TOKEN_TO_BE_REPLACED

Apparently so, at least for some members of the teaching profession whose judgment parents are supposed to trust blindly, according to President Biden and others.

Just a few days ago, Ethics Alarms discussed [#3] the vile treatment of a social studies teacher by the San Francisco’s Creative Arts Charter School, which suspended her and forced her to grovel an apology for bringing cotton bolls, into her class as part of a lesson on the cotton gin and its impact on slavery and the Industrial Revolution. Commenter Curmie, a teacher himself, properly condemned the school’s reaction in a post on his own blog, here.

However, a Rochester, NY white middle school teacher told his class of mostly black students to pick seeds out of cotton bolls during his lessons on slavery in a seventh-grade social studies class. In another fun exercise, the same teacher brought in handcuffs and shackles for the black students to put on. White children were allowed to opt out of the cotton-picking, reportedly, while black students were not. When a black child balked at putting on the shackles, the teacher threatened her with punishment.

END_OF_DOCUMENT_TOKEN_TO_BE_REPLACED

I usually use this video clip…

END_OF_DOCUMENT_TOKEN_TO_BE_REPLACED

The Civil War started on this date in 1861, as Southern forces fired on Fort Sumter in South Carolina’s Charleston Harbor. That’s about all that needs to be said. All wars are ethics nightmares, but none has had more ethics ramifications for this country, from the lives sacrificed to end slavery, to the war crimes of Andersonville, and the total war tactics of Sherman, to the myriad instances of astounding courage, cruelty and incompetence on the battlefields and the ongoing debate about how best to glean the right ethics lessons from them. (Tearing down statues is not it, though.) The Civil War took away our greatest POTUS, Lincoln, and gave us Presidents Grant, Hayes, Garfield, Arthur, Harrison and McKinley, Civil War veterans all. The one non-veteran in the sequence, Grover Cleveland, is an ethics controversy himself because of it: Grover paid someone else to take his place in the draft. And yet….try asking the nearest college grad to give you the dates of the Civil War. I asked a Cornell law grad and former associate of one of the most prestigious law firm in the nation once.
She guessed “Somewhere in the 1930s, right?”

1. I’ll take “Unethical environmental fanatic nutballs, Alex!” Adbusters, a self-described “international collective of artists, designers, writers, musicians, poets, punks, philosophers and wild hearts” posted instructions on how to deflate the tires of “rich people’s” gas-powered vehicles. [Pointer: JutGory] “Wedge gravel in the tire valves, leaflet the SUV to let them know the tires are flat and why it was done, and walk away. It’s that simple,” the group said in a tweet. The group cautioned “to avoid targeting vehicles with disabled stickers or hangers.” That’s considerate of them…

This is what climate change hysteria does to people who lack ethics alarms. Here’s what they want you to leave on the windshield when you disable a car:

2. Good. Now what took you so long? On the Huffington Post, progressive opinionater Stephen Crockett authored a rueful essay bemoaning the fact that Black Lives Matter is apparently a racket. (Please note that this space figured that out years ago, and it wasn’t hard.)

(THERE IS NO GOOD GRAPHIC FOR “AFTERTHOUGHTS”)

The 29th is another of those ill-starred days in U.S. ethics, topped off in 1973 by the U.S. withdrawal from Vietnam, the half-way war that was an ethics train wreck for decades. Two years earlier, on the same date, Lt. William L. Calley was found guilty of premeditated murder by a U.S. Army court-martial at Fort Benning, Georgia. Calley, a platoon leader, had led his men in a massacre of Vietnamese civilians including women and children on March 16, 1968. Ten years before Calley’s conviction, Julius and Ethel Rosenberg were convicted of espionage for their role in passing atomic secrets to the Soviets during and after World War II. They were executed in 1953, a flashpoint in the schism between the American Left and Right that still is a sore point. (Ethel appears to have been a genuine villain.)

1. I thought this was a hoax. It’s not, unfortunately: someone got a photo of the cheat cheat for “talking points” that President Biden was holding when he massacred his explanation for his Russian regime change outburst in an exchange with Peter Doocy. 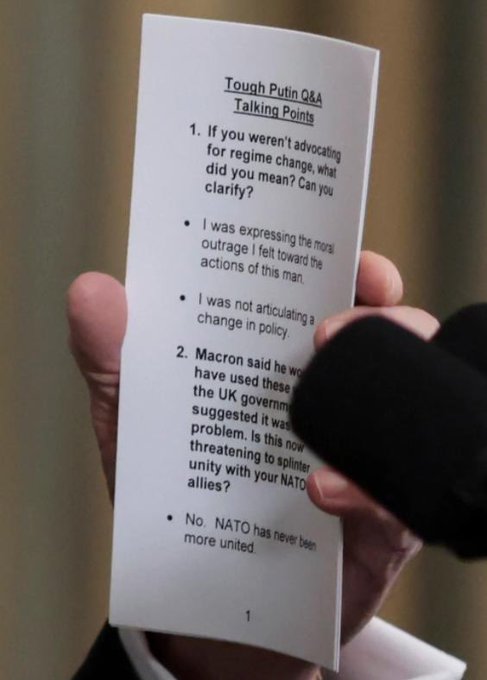 This does not fill me with confidence. You? The ethical value at issue is competence.

2. The propaganda and misinformation continues. Though some recently departed here could never grasp it, honest and trustworthy newspapers shouldn’t be publishing falsity and partisan propaganda in house opinion pieces. That’s when the opinion is offered using misleading or incomplete facts—deceit–and the New York Times does it almost every day. I can’t trust a group of editors who permit that. Examples:

It’s incredible how quickly we’ve normalized the fact that the last president tried to retain power despite losing the election and that a mob he incited stormed the Capitol. Many people took part in the effort to overturn the election — among them, we recently learned, the wife of a sitting Supreme Court justice, who hasn’t even recused himself in cases about the attempted coup.

The President in question wanted to challenge the results of an election he believed was the result of illegal manipulation, and as President, he had a duty to do that. I know Krugman isn’t a lawyer, but incitement is a term of art and a crime, and Trump did not “incite a mob” by addressing a crowd. Saying Justice Thomas “hasn’t even” recused himself because of the completely legal communications of his wife falsely implies that doing so is required or the justification for him to do so is undeniable. It isn’t. Editors should not allow such deliberately confusing and misleading opinion material END_OF_DOCUMENT_TOKEN_TO_BE_REPLACED

‘Hey, how about this? Let’s make our underpaid school teachers scrounge for dollar bills on their knees to amuse the crowd! What do you think?’

Someone really said that, or something similar, in a team promotion brain-storming session for The Sioux Falls Stampede, a junior league hockey team in South Dakota. And apparently everyone loved the idea, because they did it! As what was advertised as the first of many”Dash for Cash” attractions between periods in their home games, the team dumped $5,000 in $1 bills on a carpet at center ice and invited ten hockey helmet-wearing teachers from local schools to fight for the bills as fans cheered the degrading spectacle….

Videos of the educators stuffing cash into their shirts and pockets spread on social media over the weekend, and the reaction was…not good.

END_OF_DOCUMENT_TOKEN_TO_BE_REPLACED

“Ick” or ethics? This recurring question seems to be at the core of a controversy at Central Valley High School in Spokane, Washington. Ninth graders in a language arts class were instructed to compile the components of the “perfect murder.”

The assignment read, in part:

“Turn the following into real sentences and put them in a paragraph briefly explaining, ‘the perfect murder.’ Items should appear in your paragraph according to the order of importance. There are 10 ideas here, so if you remove one you have to add an idea of your own.