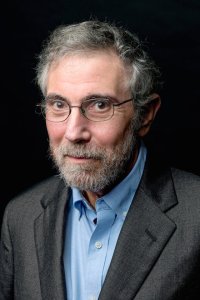 I don’t bother with New York Times op-ed columnist Paul Krugman here, for the most part. He constantly discredits himself by intentionally misleading his gullible readers, hiding the ball, engaging in deceit as an advocacy tool, over-stating and hyping and generally bolstering his progressive opinions with a nauseating combination of intellectual dishonesty, hypocrisy and condescension. I have no patience with such columnists, or any publication that inflicts them on its readers.

A parallel in the sportswriting field is the much lionized Thomas Boswell, a Pulitzer Prize-winning columnist who writes for the Washington Post. Boswell has written several books, and is regarded by many as a deep thinker about baseball. (My wife and I once were friends with a couple that socialized with the Boswells, and invited us to join the four of them for an evening. I told them that I could not stomach being in the same room with the guy.)  Many years ago, Boswell was writing about the individual talents of the Boston Red Sox, a topic I know at least as much about as he does. In assessing then-Sox catcher Jason Varitek, Boswell noted that “Tek” led the league in passed balls, leaving the impression that this demonstrated a serious flaw in his catching abilities. But I knew, and more importantly Boswell knew, that the Red Sox  had a regular rotation starting pitcher, Tim Wakefield, who was a knuckleballer, and was the only starting pitcher in the league who threw that confounding pitch.  If a catcher regularly catches a knuckleball pitcher, he leads the league in passed balls, usually by a large margin. Always. It has nothing to do with how good a catcher he is, and Varitek was a very good catcher. Yet Boswell deliberately cited the statistic without explaining to his readers what it meant in Vartitek’s case. He did this because he was trying to argue that Boston had defensive problems. This is unethical advocacy, and unethical journalism.

After that, I only read Boswell’s columns to document his dishonesty. I was never disappointed. He’s a cheat, relying on the ignorance of his audience to deceive them.

Paul Krugman is like that. After I posted the quote from Jonathan Haidt’s speech in which the professor perfectly described the ideology-driven betrayal of the culture and our democracy by institutions of higher education, I recalled a recent Krugman piece in the Times that I had instantly dismissed as classic deceit. One passage was literally the anti-matter version of Haidt’s hard truth regarding the rot in our colleges, a deliberate lie that denied the existence of the problem in order to further Krugman’s perpetual attack on Republicans and conservatives.

Even as old prejudices return, we’ve clearly entered a new age of politically potent anti-intellectualism. America built its world pre-eminence largely on the strength of its educational system. But according to Pew, 58 percent of Republicans now say that colleges and universities have a negative effect on the country, versus only 36 percent who see a positive effect.

And I don’t believe for a minute that this turn against education is a reaction to political correctness. It’s about the nasty habit scholarship has of telling you things you don’t want to hear, like the fact that climate change is real.

I honestly don’t know how even the most biased Times reader could read this junk without thinking, “What an asshole!”

1. So accurately criticizing colleges and universities for doing a miserable job while charging students a fortune makes one “anti-intellectual,” does it? Today’s college students graduate infantilized, marinated in identity politics,  under-informed, and indoctrinated in socialist and anti-American propaganda. College campuses are hostile to free speech, diversity of ideas, and due process. Harvard is being sued for discriminating on the basis of race, against Asian-Americans, and it is the tip of an ugly iceberg.  Dozens of schools divert scarce funds to sports programs in which coaches are paid more than any professor. Most college students graduate with minimal knowledge of U.S. history, a dearth of instruction in Western Civilization, pathetic writing and reasoning skills, and no ethics training at all.  For this, an outrageous proportion of them enter the workforce with crippling debt. Meanwhile, lowered standards of admission, affirmative action, diminished rigor in the classroom, useless course options and grade inflation have rendered college degrees nearly meaningless as genuine credentials.

I think Krugman knows all this, too.

3. Then Krugman stoops to the most transparent straw man he can find. Right, concerns about higher education are just about “political correctness,” that’s all. That’s what American with their eyes open object to about higher education, colleges declaring certain words taboo and the campus hostility to conservative positions. Political correctness is one consequence among many of the conditions I just listed.

4. No, Paul, it’s about the nasty habit biased and hyped scholarship has of demanding that students capitulate to partisan and ideological positions and accept propaganda as truth. A college should give students the skills and tools to examine, say, Al Gore climate-change agitprop, and critique it, not bow down to it.

Again, Krugman knows what he is doing. He’s very smart, well-read and  informed. He knows that “climate change is real” is a misleading and simple-minded reduction of the legitimate skepticism about the new progressive religion and proposed policies regarding it. OK, it’s real. Now what? How significant is it? How predictable? What will be the effects, and when will they occur? Are the proposed policies practical? Affordable? What are the alternatives? “Climate change is real” isn’t education, it’s a protest sign. It’s about the level of enlightenment students can count on for their five figures a year, too, and Krugman says that expressing criticism indicates a rejection of scholarship.

24 thoughts on “Paul Krugman, The Anti-Haidt”