I was blissfully unaware of the existence of Logan Paul until this morning. He’s a unique creation of the cyber-age, a 22-year-old college drop-out whose occupation is “social media entertainer.” He makes daily videos–“vlogs”—that he posts on his YouTube channel. It has 15 million followers, along with his hundreds of thousands of others across social media, and is regarded as major cultural force, for what, I have no clue. He is, of course, rich.

In pursuit of more followers and cash, he posted a video, since  removed from YouTube available elsewhere online, that features a dead young man, lying in a Japanese forest known as the “Suicide Forest,” which lies at the base of Mount Fuji. Paul began by telling his YouTube fans,

“This definitely marks a moment in YouTube history Because I’m pretty sure that this has never hopefully happened to anyone on YouTube ever. Now with that said, buckle up!”

With that titillating intro, Paul described the reputation of the Aokigahara Forest at the base of Mount Fuji. It is a popular site for distraught Japanese to end their lives, and is thus known as “the Suicide Forest.”  Locals also say the forest is haunted, another exiting feature that Paul and his companions hyped as they walked along. Then they come across the dead body. The video blurred his face. “Yo, are you alive?” Paul shouted at the dead man. As a camera zoomed in, Paul described the body’s condition, and speculated that the death was recent.

After making the obligatory observation that depression and mental illness are not a joke, Paul’s group left the scene and he began joking, with the mugging and giggling his fans are accustomed to seeing on his vlogs. At the end of the video he encountered a young fan and told him, smirking and pointing the way, “I have one piece of advice. Don’t go over there!”

And yes, he was wearing that hat (above) the whole time.

The video was posted over the weekend, and did not receive the desired response. Many expressed horror that a young man’s body would be used a a prop, and that Paul would be cavalier about mental illness, depression and suicide. Now the Cyber Furies are after him, and threatening to turn him from web star into a web pariah. 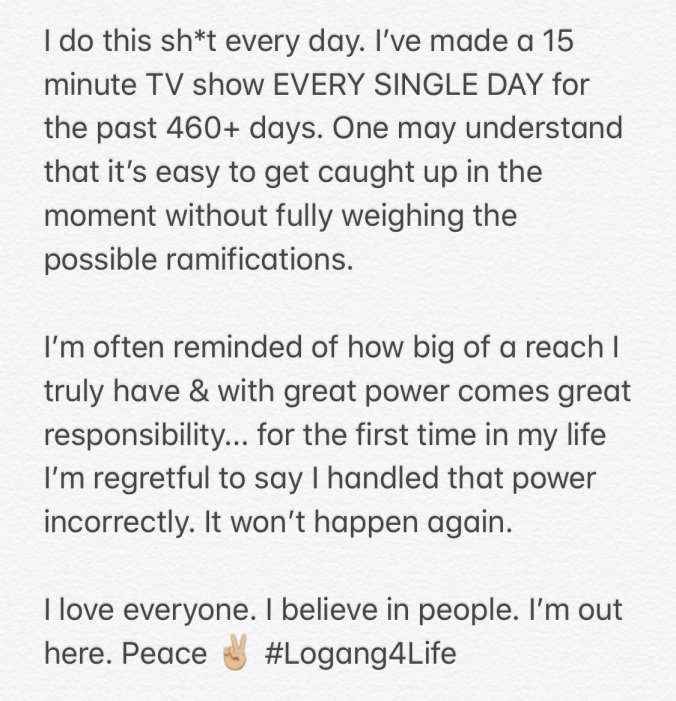 Not bad. On the Ethics Alarms Apology Scale, being generous, I’ll give it a 6:

“A forced or compelled version of 1-4, when the individual (or organization) apologizing knows that an apology is appropriate but would have avoided making one if he or she could have gotten away with it.”

Not bad for someone who obviously has inadequate experience, education, wisdom and values for the influence he wields, and completely predictably stepped on a landmine that someone with functioning ethics alarms and an emotional maturity above a 7th grade level would have easily seen and avoided. The apology is sincere, but it is tone-deaf, ethics deaf, and self-deluding. He can’t promise that he won’t mishandle his power again, because he has inadequate intellectual and emotional resources to have such power, or avoid such pitfalls and bad decisions. His apology proves it, just as his conduct on the video proved it. It’s unethical to take on great responsibility without the skills to handle such responsibility.

The apology begins with the hoary rationalization, “Everybody makes mistakes.” Yeah, but everybody doesn’t use a dead body to get video views and as a prop for juvenile wisecracks. Then he lies: of course he did it “for views.”  That his business, that’s what he does. Yes, we know he didn’t want to set a cyber-fire that threatens to burn up his income stream. But he also intended to use a suicide’s tragedy to “get views.”

Next he tries virtue-signaling. This was really an attempt at suicide awareness and prevention! Riiiiight. How stupid does he think his fans are? This was a serious video, and he dressed for it like that?

[You know what? As I write this, I’m changing that Apology Scale rating to a #10:

10. An insincere and dishonest apology designed to allow the wrongdoer to escape accountability cheaply, and to deceive his or her victims into forgiveness and trust, so they are vulnerable to future wrongdoing.

The more I read his tweet, the transparently dishonest  it is.]

No, Logan, it isn’t easy to get “caught up in a moment” involving a dead stranger unless you are a callous, self-absorbed, juvenile and irresponsible  jerk, and that’s what your fans have suddenly figured out.

If you want to read an ethically obtuse commentary on Logan’s fall—and who wouldn’t?–read this by Serena Bergman in the Independent. This should give you a sense of her keen analytical powers:

In journalism, we have very specific guidelines on how we should report suicide responsibly – and Paul fell far below that standard. Yet I’ve been to comedy shows and watched sitcoms where suicide is the punchline of a joke. Similarly, if you’ve ever watched procedural TV dramas you’ve surely seen suicide – as well as rape, murder and all manner of other violent crimes – depicted for your entertainment; if you’ve ever listened to hip hop (and indeed many other genres, often including pop music), you’ve heard the glorification of drugs and gang violence.

Should I tell her, or do you want to? None of those things involve using an actual suicide victim’s physical body for entertainment value, you idiot.