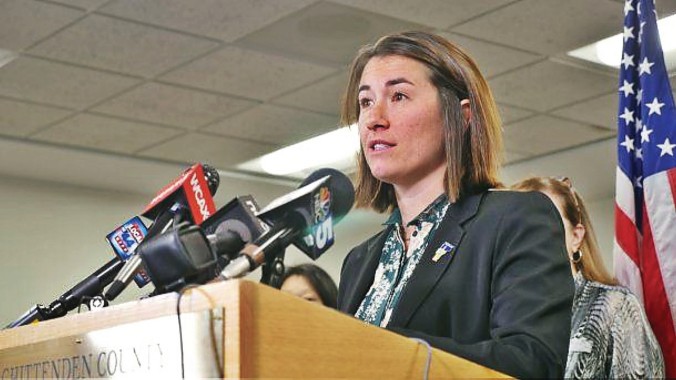 In October of last year, police charged Wesley Richter, a University of Vermont continuing education student, with disorderly conduct after university officials said he used “explicitly racist and threatening language” against black students and diversity initiatives on campus. Richter was overheard in a phone call with his mother, though exactly what Richter allegedly said has not been made public.unknown. Of course, what he said doesn’t matter, unless he was planning a crime, which he was not. He was talking to his mother, and a student who overheard the discussion took offense at what was said. Richter, through his lawyer, denied saying anything racist, but again, it doesn’t matter. Saying racist things in a phone conversation cannot be a crime. It’s bad manners. It’s disrespectful to those listening. A school may be able to justly find some kind of violation to a reasonable and neutral civility code involving words but not content. But an overheard phone conversation cannot be a crime. It is mere words.

Richter’s lawyer, Ben Luna, argued that George didn’t have probable cause to bring the misdemeanor charge, and Superior Court Judge David Fenster agreed. In a statement, Luna called the dismissal a victory for free speech and the First Amendment. “The court’s ruling reinforces my opinion that this matter should never have been brought,” he said.

The court’s ruling also reinforces my opinion that Sarah George should be disciplined by the bar and fired.

Right at the start, Vermont’s Rule 3.8, as in every other state, makes it clear that prosecutors must not charge anyone with a crime without probable cause:

Rule 3.8. SPECIAL RESPONSIBILITIES OF A PROSECUTOR

The prosecutor in a criminal case shall:

(a) refrain from prosecuting a charge that the prosecutor knows is not supported by probable cause;

The Comments to the rule say in part,

[1] A prosecutor has the responsibility of a minister of justice and not simply that of an advocate. This responsibility carries with it specific obligations to see that the defendant is accorded procedural justice and that guilt is decided upon the basis of sufficient evidence.

The First Amendment makes it beyond argument that the government may not punish or seek to punish citizens for the content of their speech. Since the only evidence that George had that a misdemeanor had been committed was a third party complaint about the content of Richter’s speech in a conversation over the phone with his mother, she did not have legal or sufficient evidence to charge or prosecute Richter. As a lawyer and a prosecutor she had to know that. If she knew it, she was knowingly abusing her power, and should be suspended from the practice of law.

If she didn’t know it, then she is incompetent and not fit to practice. She should be fired.

Incredibly, George said she thought the case was strong, but that it was also “a learning experience.” “It’s disappointing, but it’s also good for us to know. It’s a really great decision for us in terms of case law and reasoning, so we know now what this court expects of us,” George said.

Yeah, the court expects you to follow the Constitution. If you have to learn that at this late stage in your legal career, Sarah, you need to go back to the drawing board. Maybe you can sell maple syrup.

She wasn’t through. “What we allege he did, we still allege he did,” she continued.  “It just didn’t rise to the level of a hate crime.”

Why is this woman a state prosecutor? Fire her.

If she is not fired, then this totalitarian, illegal, abusive and intimidating prosecution chills free speech, not just on the University of Vermont campus, but in the whole state. A citizen should not have to wait two months, as Richter did, for a judge to declare that the state cannot persecute him for what he is overheard saying, whatever it is.

Ah, but this is Vermont, you know, a super-progressive state, one that even elected a socialist U.S. Senator. It is incubating anti-speech, anti-democratic citizens who are just waiting for the day that their party can seize power and make bad speech a crime. The University of Vermont itself is part of that grand plan. It triggered this exercise in intimidation. Then the state’s police added their force to the wrongspeak prosecution, and finally the state, represented by a True Believer. She thinks speech can be a hate crime.

I keep hearing that Democrats expect a “blue wave” in the 2018 elections, and these kinds of episodes better serve as a warning to us of what that blue wave will mean. I don’t ask much of a political party, but respecting and upholding my constitutional rights are one thing I do demand, and it has become vividly, frighteningly clear to me that the current Democratic Party not only won’t do that, it is intent on doing the opposite. That blue wave is going to begin drowning our guaranteed freedoms, and eventually democracy itself. I wonder if enough citizens understand that. I wonder if enough citizens are paying attention, when progressive states give prosecutors like Sarah George the power to charge s student with a crime for what he says to his mother.

18 thoughts on “A Vermont State’s Attorney Prosecuted A College Student For An Overheard Phone Call. Why Is She Still Employed?”