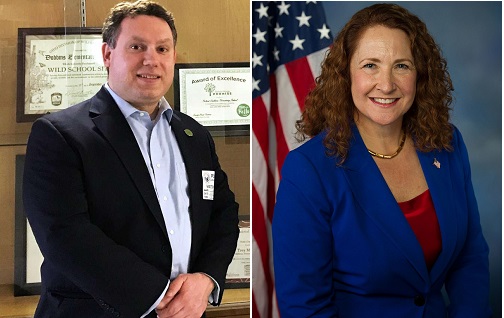 The abuser and his enabler, who is also a devoted champion of protecting women in the workplace for male predators unless the particular predator is useful to her.

Rep. Elizabeth Esty (D-Conn) was quick to demand the Rep. John Conyers resign when the facts surfaced of his habitual sexual harassment of staff and other women. She backed the shaming and eviction of Minnesota Senator Al Franken, another Democrat, based on allegations of sexual misconduct. She has been a vocal  champion of the #MeToo movement on Capitol Hill.

But it has all been posturing, for Esty doesn’t embrace the actual principles of It’s Time or #MeToo. Like so many other employers, businesses and cultures, like NBC, CBS, Hollywood, the Weinstein Company, the Metropolitan Opera, the Trump White House, and, of course, the Catholic Church, Esty believes  that sexual harassment and sexual abuse are unacceptable and a reason to point fingers and level accusations when someone else does it, enables it or ignores it, but when the abusive employee is your own and is a “high performer,” as in “a star,” it’s different somehow.

When she learned that her own valuable Congressional aide, chief of staff Tony Baker, had engaged in harassment and abuse of Esty’s own female staff members, Esty moved to protect Baker rather than the women. He was not dismissed from his position until three full months after his wrongful and illegal conduct was known to her, continuing to work with the same women he had threatened.  Then she signed a non-disclosure agreement and paid him $5000, while also writing a glowing recommendation so he could be free to harass women someplace else. Baker got himself employed  by Sandy Hook Promise, a gun control group, which dismissed him after the full story of the reasons behind his leaving Esty’s staff came out last week.

“You better fucking reply to me or I will fucking kill you,” Baker had said  in a voice mail message to Estes aide Anna Kain. Kain was granted a restraining order against Baker after she signed a sworn affidavit that the Esty chief of staff punched and threatened to kill her. This and more was still not enough for Rep. Esty to see her way to firing him. Woke is apparently not the same as “awake.” Or sincere.

Now Democratic women in the Connecticut state legislature are demanding that the congresswoman resign. Esty refuses, saying in a recent statement,“For those who have asked, I want to be clear that I am not resigning, that I have important work to do in Congress, including building on the lessons of this horrible series of events.” Translation: “I will be working to put in pl;ace measures to stop people like me from behaving as I did.”

Esty’s version of public damage control was almost as embarrassing as her handling of Baker’s conduct.  Esty really is going with the argument that she is especially well-positioned to advance the cause of preventing sexual abuse in the workplace by pushing for regulations needed by employers just as unethical and clueless as she is. Her new chief of staff promoted a note of support from a local Democrat, that said,  “Elizabeth has learned first hand the improvements needed to protect Congressional staff, and has fought and will continue to fight to implement those needed procedures and protections.” In her own letter to House Democratic , Esty said the misconduct by her former chief of staff should be a cautionary tale for Congress to tighten up the way it handles domestic violence and sexual harassment.

Wait, what? His conduct should be a cautionary tale for Congress? What part of “there’s a serial abuser running amuck on your staff, harming and threatening women, and he needs to be stopped immediately!” requires a cautionary tale? Then she told the Hartford Courant. “I was not the perpetrator of this.” “This” apparently means she did not herself harass her staff. If “this” means the cover-up, she damn well was the perpetrator. Finally, she argues, “I think there’s a whole record of what I’ve accomplished.”

In other words, “I deserve The King’s Pass.”

Suuure: it took three months to find out that another aide had been punched by the creep.

In other words, the ends justify the means.

She is a hypocrite and a liar, of course. She is also, I surmise, not an exception, but the rule.