[BOY its been hard keeping up on ethics blogging between air travel, a balky laptop, seminars, the new firm and, most of all, ushering the Red Sox to a World Championship. Yesterday was classic: I had multiple posts composed in my head, and literally was never able to find time to work on them. I’m sorry. I’ll figure it out…]

1 Baseball ethics: The exciting Cubs-Rockies Wild Card elimination game was set up by the Colorado 12-0 win over the Washington Nationals on the final day of the season. Thus the Rockies ended the season in a tie with the Dodgers on top of the NL West, requiring one of the two tie-breaking games on Monday. These were ratings bonanzas for baseball and the networks showing them, leading to conspiracy theories regarding that last Rockies victory.  Max Scherzer, arguably the best pitcher in the league, was supposed to start the game fr Washington, and if he had, its safe to say that the Rockies would not have won 12-0, if at all. Reportedly he wanted to start the game, but the Nationals decided late to start the immortal Eric Fedde. Were they trying to give the game to the Rockies? Did orders come down from MLB to tank?

The theory makes no sense, because the suits and networks are always rooting for the big media centers and their teams to make it to the World Series. The Dodgers, Red Sox, Yankees and Cubs mean big ratings, and the Rockies posed a threat to the Dodgers and ended up eliminating the Cubs. Nonetheless, a team like the Nats, out of the race, running out the string, should have the professional integrity to go all out to win when a game is important to its opponent.

2. I’m not going to demand an apology, but they still owe me an apology. The Hill is reporting that…

Congressional investigators have confirmed that a top FBI official met with Democratic Party lawyers to talk about allegations of Donald Trump-Russia collusion weeks before the 2016 election, and before the bureau secured a search warrant targeting Trump’s campaign.

That’s the firm used by the DNC and Hillary Clinton’s campaign to secretly pay research firm Fusion GPS and Christopher Steele, a former British intelligence operative, to compile a dossier of uncorroborated raw intelligence alleging Trump and Moscow were colluding to hijack the presidential election.

The dossier, though mostly unverified, was then used by the FBI as the main evidence seeking a Foreign Intelligence Surveillance Act (FISA) warrant targeting the Trump campaign in the final days of the campaign.

This is not exactly surprising, but it ticks me off for personal reasons. Several left-leaning commenters here who I respected and gave a lot of attention, abandoned Ethics Alarms in high dudgeon because I continued to question the growing evidence that the entire Russian collusion investigation was rigged, partisan, illegal, and an effort to bring down an elected President using a corrupt and politicized FBI and Justice Department. Here was one exit speech, and from a friend:

“But I can’t allow my own tiny voice to be associated with this nonsense any longer. Being the “left” voice is one thing; being way out on the fringe is quite another, and I don’t think it’s me that has moved. I see far too many shades in our times now of McCarthyism (not Gene), George Wallace-ism, and autocracy. I’m deeply concerned about the continued health and well-being of our democratic institutions. I suspect Rod Rosenstein will soon have no recourse but to resign, and I’m doing something similar. I don’t want to be party to this hysterical of a dialogue (in my humble opinion).”

Call me petty, but I resent being called hysterical and partisan by people who are so biased that they refuse to acknowledge what’s right in front of their faces, because it would require them to admit, as those of integrity would, in the immortal words of PGA golfer Roberto De Vicenzo after he lost the Masters by signing an erroneous score card, “What a stupid I am.”

Since that memorable May exit, the question of whether the FISA warrants allowing the FBI to surveil the Trump campaign were properly granted  has been decisively answered in the negative, as has the question of whether the FBI and the Justice Department can be trusted to be objective and just.  Former Deputy FBI Director Andrew McCabe was  fired for lying, and department official Bruce Ohr’s outrageous conflicts were revealed. The released emails between Peter Strzok and Lisa Page suggest, at very least, deep, deep, anti-Trump biases within the Justice Department. Then there’s Rod Rosenstein: From the New York Times:

“The deputy attorney general, Rod J. Rosenstein, suggested last year that he secretly record President Trump in the White House to expose the chaos consuming the administration, and he discussed recruiting cabinet members to invoke the 25th Amendment to remove Mr. Trump from office for being unfit.”

Rosenstein denies it all, and indeed this kind of gossip shouldn’t be reported as news—but the anti-Trump commenters here never hesitated to regard similar third hand accounts and leaks to be reliable and significant if they impugned the President’s  character.  It is all still more dark and billowing smoke to support reasonable suspicion that there is unethical and dangerous anti-Trump bias and “deep state” sabotage of his administration coming from within the FBI, the other security agencies and their leadership, and the Justice Department itself.  This condition—the only question is how deep and dangerous it is—has been obvious and undeniable (by anyone not IN denial) for a very long time. I resent–did in May, and do now—being accused of spreading nonsense and “fringe conspiracy theories” by those who are aiding and abetting the enemies of democracy by deliberately or naively ignoring reality.

I admit, I miss the participation of “resistance” and resolutely knee-jerk progressives in these threads. I miss not seeing someone making an ass out of themselves, post after post, comment after comment, by defending the conduct of Diane Feinstein, Cory Booker, and other Democrats as they resort to the lowest tactics imaginable to keep Brett Kavanaugh off the Supreme Court. True, one previously rational moderate here has persisted in referring to Kavanaugh as a “potential rapist,” and that’s been fun, but I want to read the comments from angry feminists arguing that women who accuse men of criminal conduct should always be believed because they have two X chromosomes. It’s such a stupid, fantastic point of view, so alien to classic liberalism and commons sense, and so much fun to beat down with one-half of my brain tied behind my back. I want to hear about how every male candidate for high office now should be vulnerable to unsubstantiated accusations that date from high school. I want to read the desperate efforts to reconcile the Left’s Brave New World with any ethics system other than “the ends justifies the means.”

3. Trump’s flat learning curve, but so what? After my seminar yesterday, a lawyer asked me about my opinion regarding the President’s extensive mockery of Dr. Ford during his recent rally speech.  Since three of the Senators on the fence quickly expressed their outrage that he was being disrespectful of a “survivor,” he asked, might this not help defeat Kavanaugh? My replies:

4. “Nah, there’s no mainstream media bias”  meets “Stop making me defend Donald Trump!” Yesterday’s “bombshell” New York Times report  titled “Trump Engaged in Suspect Tax Schemes as He Reaped Riches From His Father,” which I predict almost nobody not stuck in an airport will read, was provocative:

a) The New York Times has apparently been spending lots of money and using lots of staff trying to dig up dirt on President Trump, going far back into his past and relationships with his family. I’d like to know if and when it has done this with any other sitting President. I am certain that every President, and indeed every public figure and every citizen, would be vulnerable if a long-term dragnet was funded to acquire potentially embarrassing information about their past and past financial dealings. Where’s the extensive examination of the Clinton Family’s baroque finances?

b) What’s the distinction between a “tax strategy” and a “tax scheme”? “Scheme” is intended to suggest something shady, but the article links the President to “schemes” developed by accountants and in some cases well underway while Trump was a child. “Suspect” means that the Times is casting suspicion on them, but that nobody with the authority to do so has declared the tactics that enriched Trump’s family illegitimate. It admits that the IRS did not question them, and that no crimes could be charged.

c) Much of Trump’s offense in the Times view appears to be that he got rich from his father’s business (“Reaped Riches!). We knew that.

d) I especially like the photo the Times used, which catches the young Trump doing his satanic Bond super-villain impression. 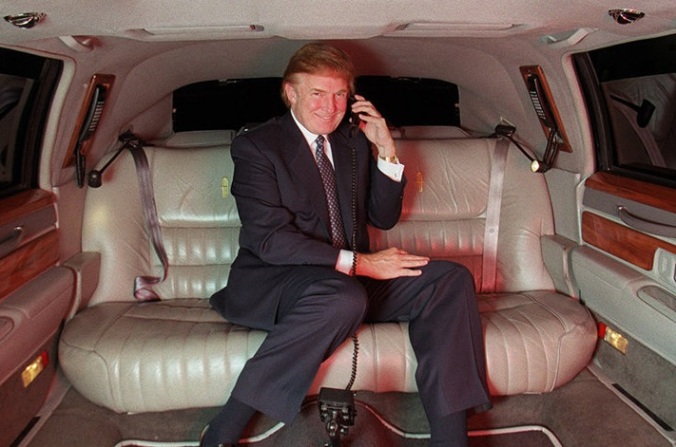