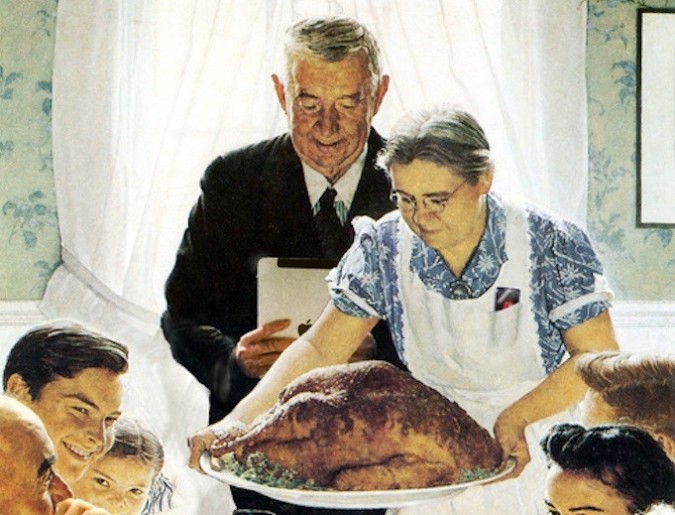 Now don’t let any “turkeys,” related or not, spoil it for you. This is a uniquely American holiday, celebrating our history, journey, values and culture, remembering the value of family, and extolling  qualities that Americans should all try to embrace in their daily lives: generosity, empathy, charity, loyalty, perspective, respect and gratitude. Once it was regarded as a religious holiday, but as the culture has gradually rejected religion, for better or worse, and not without the full complicity of organized religions whose conduct would repel anyone, the holiday has struggled to find new moorings. Its value as a yearly ethical touchpoint makes that struggle worth continuing. 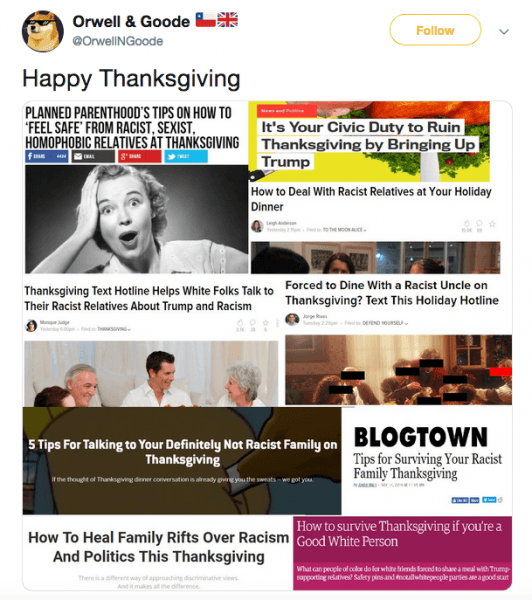 One of the things I have long been thankful for was the excellent training I received at our family dinner table from my proudly iconoclastic father, who could argue any side of any issues, and did, just to teach his kids that they better have a firm grasp of facts, logic, language, and critical thinking before making any assertion, lest they be made to look like fools. He also taught the value of an open mind, and resisting lazy conventional wisdom without foundation, like, say “Trump is a racist.”

2. This one is Obama’s fault. Though heated political arguments were always a potential part of family gatherings, it was Obama’s administration and his allies that made the disgusting decision to weaponize the holidays, commanding their human drones to arrive at gatherings ready to argue the benefits of the Affordable Care Act, and providing brochures and videos to help them accomplish the mission. (Bulletin from Justice Roberts: “There are no Obama Thanksgivings or Trump Thanksgivings!”)

3. To save you some time, since it’s Thanksgiving…The reactions to the obnoxious array above on the Instapundit comment stream contains a lot of excellent reactions. (Boy, I wish I could have assistant bloggers who kept posting content from midnight to dawn every day…):

If you resent cooking for everyone you shouldn’t be doing it. Cooking is a way to give love, an expression of generosity. Let someone else have that gift.
If you have a pressing need to correct your evil relatives on science, politics, and virtue, you are being proud, judgemental, and self-centered. Try listening. Open-minded, compassionate, and loving are better traits for you and them.
If you feel overwhelmed all day, you are not feeling gratitude, the antidote for all burdens. It’s called Thanksgiving.
If you can’t put up with your own family, you are intolerant. You haven’t been practicing, have you? There’s a reason we call it practicing tolerance.

Happy Thanksgiving. I mean both of those words.

1. Do not invite them to your home for dinner.
2. If you have to invite them to your home for dinner, explain to them politely that insulting you by belittling your values, race, religion, etc; will have unpleasant consequences.
3. If they nevertheless insult you, say you are racist, say you are greedy for not wanting to pay their medical bills, etc; stop the dinner.
4. Take all their food away.
5. Tell them that their share of the food will now be given to someone who will appreciate it, ex: a homeless person.
6. Very politely, show them to the door.
7. Tell them to leave and advise them to order a pizza next thanksgiving.

They are being told to assume that they are morally, socially and intellectually superior to them and that the proper responses are to instruct, oppose or ignore them – anything but listen to them and consider that people who are more experienced than them and who have maintained careers, paid a mortgage, raised a family and in short accepted and fulfilled responsibilities for years might know something they don’t.

4. It’s a good thing narcissism is no longer considered a mental illness, because Buffy would have it…Sarah Michelle Geller, best and more or less only known for her portrayal of Buffy the Vampire Slayer on the cult TV series, ran away with this year’s Thanksgiving Ethics Dunce title with this post on Instagram: 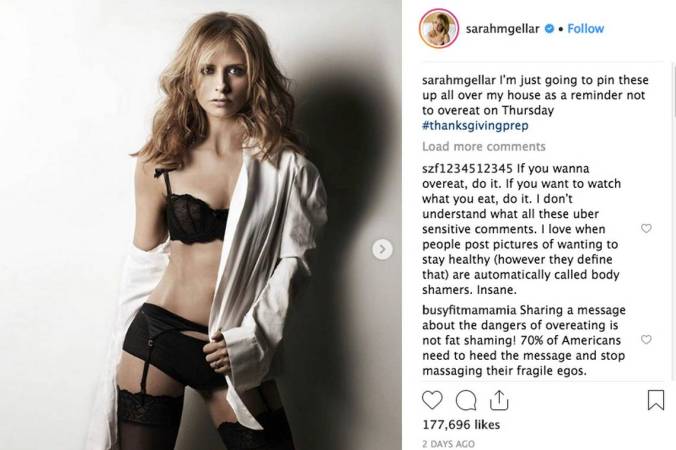 Reading the small print from Geller: “I’m just going to pin these up all over my house as a reminder not to overeat on Thursday.” Yeah, I’m going to post photos of me when I was 30 all over the house too, and hope not eating too much in a single meal makes me younger too.  Geller is 41, and that photo is at least ten years old. She just wanted an excuse to post a flattering picture of herself, which is pretty much what Instagram is about: a breeding ground for the shallow, appearance-obsessed and narcissists. She wasn’t really fat-shaming, which is what the Social Media Outrage Mob ultimately forced her to apologize for. The has-been actress was celebrating herself, and exploiting Thanksgiving to do it. Her latest endeavor, according the Wikipedia, was publishing a cook book.

5. Not to be  a downer, but President Kennedy was assassinated on this date. I know it has happened before, but celebrating Thanksgiving on November 22 is extremely dissonnant for me, and I assume others. Since the date of the holiday isn’t fixed, Congress should make a special provision that the Friday after the 22nd is Thanksgiving on the rare years this happens.