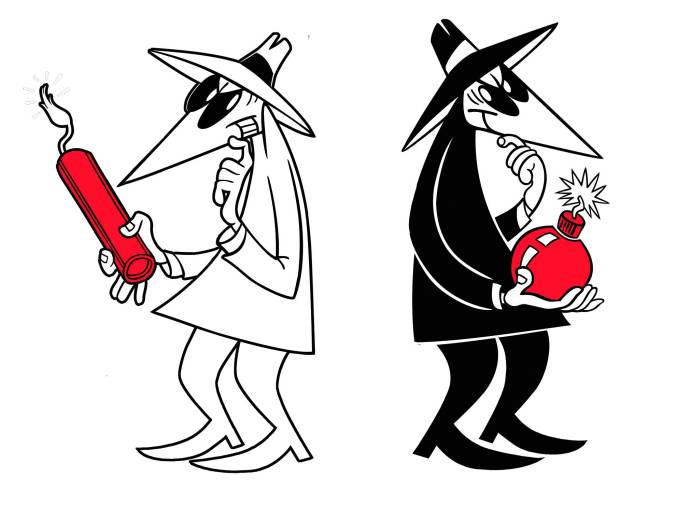 If you are old enough, you may remember the long-running comic  in Mad Magazine called “Spy vs Spy.” It was kind of a wordless Roadrunner cartoon with a Cold War vibe, and not especially funny, but I just thought of it for the first time in decades. (Incredibly, it is apparently still running in Mad, though the magazine itself is sinking fast.) I was considering this ridiculous story…

…It started small, but disputes over a Kansas man’s alleged violations of his homeowner association’s rules has led to a complex legal battle that is now the most expensive of its kind. Owner Jim Hildenbrand, has been locked in conflict with the HOA of Avignon Villa Homes since he moved there in 2012…

What began with a disagreement over the placement of a satellite dish and a decorative wall has escalated into a legal back-and-forth that has cost both parties at least a combined $1 million. It is the most expensive HOA dispute in the country.

It is also yet another example of the increasingly common societal phenomenon of “Asshole vs. Asshole.” These are ethics breakdowns where two parties in disagreement decide that making the other side pay for daring to have an adverse position overwhelms whatever the original objectives of the two parties were. It is reminiscent of the kinds of disputes parents—the good ones, anyway–arbitrate between siblings. “You’re both right,” Mom or Dad will say, “And you’re both wrong. You have reached the point where the escalation of anger and retaliation is the problem, not what you think you are arguing about.. Work it out. Compromise. See it from the other one’s perspective. And if you don’t, we’re going to punish both of you.”

In the case of Mr. Hildebrand and his fascist Home Owner Association, both sides say it’s the principle of the thing. As any reader hear know, I am a believer in and a practitioner of taking stands for principle, but knowing when this is essential (Do NOT apologize for speaking the truth or bucking the mob) and destructive is a critical life skill. The trick is keeping emotion out of it, and engaging in ethics problem solving. Asshole vs Asshole occurs when hate, and anger, and the desire to teach that jerk a lesson blinds both parties to common sense, the Golden Rule, and the human duty to seek peace, not war.

In the Hildebrand affair, the homeowner says that the Association is unreasonable and a bully, and someone has to stand up to it. The Homeowner says that this is a test of whether rules can be flaunted by whoever digs in his or her heels, or whether there will be order in the community. However, anyone who hasn’t lost their minds should be able figure out that giving happy lawyers a millions bucks over a dispute about a the placement of a satellite dish, a St. Francis statue in a garden, and a decorative wall around some flowers is a stupid waste of time and money. Yet when the Asshole vs Asshole scenario kicks in, they can’t.

This is why it is vital, when the asshole reflex starts tingling,  to go to an ethics decision-making system—any will do–and work it out. Here is the one Ethics Alarms has had a link away from the beginning—originating at the Josephson Institute of Ethics:

1. Determine precisely what must be decided.
2. Formulate and devise the full range of alternatives.
3. Eliminate patently impractical, illegal and improper alternatives.
4. Force yourself to develop at least three ethically justifiable options.
5. Examine each option to determine which ethical principles and values are involved.

1. If any of the options requires the sacrifice of any ethical principle, evaluate the facts and assumptions carefully.
2. Distinguish solid facts from beliefs, desires, theories, suppositions, unsupported conclusions, opinions, and   rationalizations.
3. Consider the credibility of sources, especially when they are self-interested, ideological or biased.
4. With regard to each alternative, carefully consider the benefits, burdens and risks to each stakeholder.

1. Make a judgment about what is not true and what consequences are most likely to occur.
2. Evaluate the viable alternatives according to personal conscience.
3. Prioritize the values so that you can choose which values to advance and which to subordinate.
4. Determine who will be helped the most and harmed the least.
5. Consider the worst case scenario.
6. Consider whether ethically questionable conduct can be avoided by changing goals or methods, or by getting consent.
7. Apply the three “ethics tests”

* Are you treating others as you would want to be treated?

* Would you be comfortable if your reasoning and decision were to be publicized?

* Would you be comfortable if your children were observing you?

1. Develop a plan of how to implement the decision.
2. Maximize the benefits and minimize the costs and risks.

1. Monitor the effects of decisions.
2. Be prepared and willing to revise a plan, or take a different course of action.
3. Adjust to new information.

“Spy vs Spy” was repetitive and not very funny; Asshole vs Asshole is destructive, ugly, divisive, and stupid. Don’t be part of it.

12 thoughts on “Asshole vs. Asshole, And How To Avoid Starring In It”