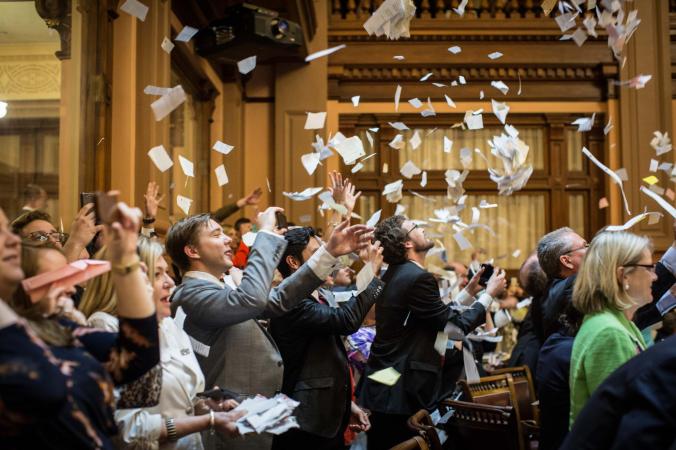 As a passionate supporter of American democracy in both practice and theory, I find the proliferation of ignoramuses, fools and morons among both elected representatives and the voters who allow them to acquire access to the levers of power to be a constant source of discouragement. The old adage about democracy being the worst form of government except for all the others is scant consolation, true as it may be. I only tune in to the reliably idiotic goings on at the state legislature level when someone or some news story forces me to take a look, which I anticipate with enthusiasm akin to that I felt toward going down into our scary basement when I was a kid. (OK, up until I moved away at 21. OK, STILL.)

Here are two examples from today….that I know about.

Alabama took another step toward near-total abortion ban legislation, House Bill 314, the “Human Life Protection Act.”  The Republican-supported bill is  in  direct defiance of 1973’s Supreme Court  Roe v. Wade ruling, an obvious gambit to try to get the conservative Roberts court to overturn it. Grandstanding, obstinacy, call it what you will, this bill is futile, foolish, and incompetent. An outright reversal of Roe is not in the cards, not even in the most fevered fantasies of anti-abortion fanatics and pro-abortion absolutists. The new law, if it becomes a law, will be struck down by a the highest Alabama court, and won’t make it to the Supreme Court docket. It’s an illegal law, that’s all. A law reestablishing child labor or repealing female suffrage would have about as much chance of getting the Court’s attention.

If Roe is to be weakened or modified, it will occur incrementally, with the Court ruling on legitimately debatable regulations regarding when a fetus or unborn child qualifies for full Constitutional protection. It is understandable that ordinary, untrained, confused citizens might think that the way to remove established Court precedent is to directly oppose it with a state law, but  that’s because, for most of them, making laws isn’t their job. State legislators, on the other hand, have no excuse but their own lack of preparation for their civic duty, and ignorance.There is more. The bill provides no exceptions for rape or incest and classifies the procedure as a Class A felony in the state, so a doctor convicted of performing abortions in Alabama would face up to 99 years in prison. Some legislators tried to add an amendment that would create an exception for rape and incest, and this caused an uproar that led to the Senate delaying the final vote. The insistence on an exception for rape or incest is a clear indication that a supposed anti-abortion activist hasn’t devoted serious thought to their allegedly moral and principled reverence for human life. A fetus that is the product of rape or incest is no less an innocent human life than a child conceived in a drunken romp or because of failed birth control.

What supporters of the rape and incest exception reveal is that they really do want to dictate when a woman should be able to decide not to give birth. Massive life disruption, poverty, lack of family support? Not good enough. We’ll tell you when there’s a good reason to kill an innocent unborn child. If the reason to oppose abortion is the life of the unborn, then how the unborn happen to be conceived is logically and ethically irrelevant.

That fact should be easy enough to comprehend  for anyone presuming to be wise enough to make laws that restrict the liberties of fellow citizens.

Meet Rep. Jonathan Stickland, R-Bedford, a Texas legislator who has contempt for doctors  who want to end vaccine exemptions. He has been on an extended twitter rant against doctors and vaccinations generally, and laws mandating immunization specifically.  A sample:

“Look, another guy in a white coat who thinks he’s a better parent than anyone else!…Make the case for your sorcery to consumers on your own dime…Quit using the heavy hand of government to make your business profitable through mandates and immunity. It’s disgusting…Do our state a favor and mind your own business. Parental rights mean more to us than your self enriching ‘science.'”

Stickland tweeted that vaccines are “dangerous,” that a doctor concerned about the child’s vulnerability to disease is a “brainwashed commie” and that defenders of science are “typical leftists trying to take credit for something only The Lord God Almighty is in control of.”

One might say that a district that elects a fool like this deserves the idiotic representation they  get, but that’s not how our system is supposed to work. Voters have an obligation, and ethical duty, to be responsible , knowledgeable, and respectful of the needs and rights of others. Ignorance is the enemy, and the Founders made it clear that an engaged and educated populace was necessary  for representative democracy to have a chance.

They were right then, and they are right now.