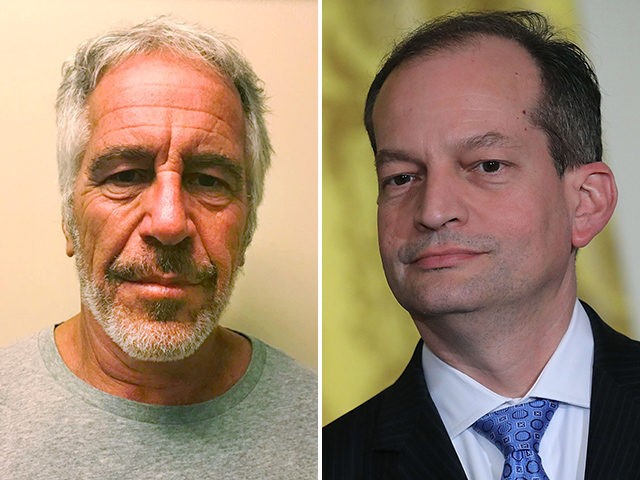 Veteran commenter Glenn Logan expressed  doubts about the fairness of current criticism of the Secretary of Labor, Alexander Acosta (above right) for his approval of a ridiculously lenient plea deal for jet-setting sexual predator Jeffrey Epstein (above left). Glenn’s objections  prompted me to search for prior posts here on the ethics issue of high level accountability for disasters and fiascos. In this morning’s warm-up, #3, I discussed the reasons I feel the criticism of Acosta is justified (re Glenn’s complaint that journalists are determined to destroy Acosta because of his connection to their primary target, the President, my response is that  critics being biased and having unethical motives doesn’t mean their criticism is necessarily wrong), and concluded,

“Finally, there is the basic ethical issue of accountability. Prosecutors allowed Epstein’s lawyers to talk them into a ridiculously lenient plea deal with minimal prison time for a privileged criminal and sexual predator with endless resources and a high likelihood of recidivism. It was completely predictable that he would continue to harm women after his release, and the new charges against Epstein show that he did exactly as expected.It is appropriate that someone’s head roll for this, and Acosta’s is the logical choice.”

Glenn responded that this sounded more “like scapegoating than accountability.” “’Somebody must pay,’ he said, “is not convincing to me.” Hence my search of the Ethics Alarms archive. This is a topic of long-standing interest for me, in great part due to my military-minded father.

I also recently watched the Netflix series “Bad Blood,” about Montreal’s Mafia. The accountability of leadership is a recurring theme in that series:  we see the father of the future head of the powerful Rizzuto family telling his son as a boy that he is now responsible for caring for and cultivating several tomato plants. “If a plant produces good tomatoes,” the father explains, ” you will be rewarded. If a plant produces poor tomatoes, you will be punished.” Even if the reasons a plant fails to produce good tomatoes has nothing to do with the son’s efforts and were beyond his control, the father goes on to say, “I will still punish you. For that is the burden of leadership. When that for which a leader is responsible goes wrong, he must be accountable and pay the price whether it is his fault or not. Only then is he worthy of his followers trust.”

The most relevant Ethics Alarms post on the subject, I was surprised to find, was from way back in 2011. Not so surprising was the fact that the post involved baseball. VERY surprising to me was that the post attracted not a single comment, despite what I consider to be, as Glenn’s comments proved, a controversial position on an important leadership and ethics topic.

Here it is again. The background: in 2011, the Boston Red Sox went into the final quadrant of the season far ahead of their division, the American League East. Inexplicably, the wheels fell off of the chariot. In September, the team lost its ability to win baseball games as well as its lead, and eventually fell so far that it needed to win the final game of the season to clinch a play-off slot. The 2011 Sox blew a ninth inning lead in that game against the last place Baltimore Orioles, and the worst late season collapse in team history was complete.

Barack Obama, and indeed all leaders, current and future, have reason to heed the results of meeting to be held today between the ownership of the Boston Red Sox and the traumatized team’s manager of eight years, Terry Francona. Francona will learn whether his tenure—he is beyond question the most successful manager in the team’s century-plus existence—will end as a consequence of his squad’s historic and inexplicable collapse, robbing it of the play-off spot that seemed guaranteed less than a month ago.

The team has an option on the manager’s services for another two years, and could pick it up, quickly and easily, as a statement that Francona was not at fault for what occurred. And he was not at fault. The combination of events that caused the disaster was unlikely and unpredictable right up until the moment when Tampa Bay’s Devil Rays third baseman Evan Longoria became the first player since the Giants’ Bobby Thompson in 1951 to put his team in the post-season with a walk-off home-run.

Nor was most of what occurred in the horrible September that will haunt Red Sox fans dreams’ all winter like Freddy Krueger remotely subject to Francona’s control.  One of the major ingredients in the recipe that could cost him his job, for example, was a seemingly desperate and bone-headed maneuver by the Devil Rays manager, Joe Maddon, who, having one last batter to stave off defeat with two outs in the ninth inning and the Rays trialing by a run, chose a .108 hitter for the job. Naturally, he hit a game-tying home run.

Being at fault, however, is not the same as being accountable. A leader is always accountable for disasters and misfortune under his or her authority; fault is irrelevant. If an employee caused the mess, the leader allowed the employee to be in a position to do so. If an unexpected event threw the leader’s brilliant plans into disarray, he or she is accountable for not adopting a different plan. Organizational disasters, whether it is Abu Ghraib, the aftermath of Hurricane Katrina, or Pearl Harbor, cannot and must not be attributed to factors beyond leadership’s control, nor should they occur without real consequences attaching to those in charge. Without the certainty of accountability, leaders will be tempted to occupy precious time constructing ways to shift blame and punishment to others, and this leads, inevitably, to weaker and less trustworthy leaders. Worse still, it causes the constituencies of leaders to lose faith and trust in the organizations they lead.

Sports is a valuable simulation of society and life in general, and the plight of a team that fails when it should have succeeded is a simplified but still valid model for businesses, movements and nations. Unless team leaders are held accountable, fans of the team will conclude that success of failure just doesn’t matter to the ownership very much, and if it doesn’t matter to the team itself, why should the fans care? I could identify five individual players whose poor play and miserable performance under pressure was infinitely more responsible for the Red Sox crash than anything Terry Francona did as manager, but both practically and symbolically, making a single player the scapegoat is both ineffective and unfair (Red Sox fans: See Buckner, Bill). The manager is the obvious and proper target, both because he is the face of the team, and also because his punishment makes the necessary point with the least damage to the organization.  The Red Sox lost with a lot of good players playing a part, but gutting the personnel is both risky, expensive, and contractually impossible. Francona is a good man, and in many ways the perfect manager in the uniquely pressurized baseball-crazy culture of Boston, with its carnivorous media, but he is still only one man, and like all managers, indeed like all leaders, replaceable.

If he loses his job, it will be another reminder of the power of Moral Luck, the phenomenon which causes us to judge an action based on its consequences rather than the action itself. Moral Luck is related to Consequentialism, the invalid ethical theory that holds that we should assess the rightness of conduct by whether it leads to good results. Moral Luck is not a system or a theory, however; it is just reality, and hard side of accountability. Two identical drivers, both intoxicated, take the same route home: one reaches his destination safely, and the other would have, if a child on a bicycle hadn’t suddenly veered into his path. His intoxication may or may not have stopped him from braking on time, but it doesn’t matter: he will be a pariah in the community, and will probably be sent to jail….and he will deserve it. The only difference between him and his neighbor is luck, and yet that luck causes us to regard his act as worse, because he is accountable for the horrible consequences.

A statistician has determined that at 11:30 PM on Wednesday evening, the odds against the Red Sox being eliminated from the pennant race were 7000 to one. That the one materialized was not the fault of Terry Francona, and had it not occurred, he would not be on the carpet today. Like all leaders he is accountable, however, and when the Boston Red Sox organization makes the necessary symbolic gesture to show that it expected better, expects better, and will not allow failure to be tolerated, minimized, shrugged off or rationalized away, Francona is likely to be the one who must bear the burden of that failure and be the victim of that gesture.

33 thoughts on “More On The Acosta-Epstein Scandal: Leadership, Moral Luck, Accountability, And Scapegoating”