1. Impeachment junk! There is so, so much of this. I am trying to decide if my launching an impeachment information and commentary website is feasible (for me, and any volunteers who step up), but it certainly is necessary.

The President has every reason to regard the Democratic fishing expeditions and non-inquiry inquiry into impeachment as an attack on the Separation of Powers and Constitutional government itself. Thus he has every right to make Congress’s abuse of process as difficult as possible, whether he has anything to hide, or not.

After all these failures to unwind the 2016 election, Democrats and the mainstream media are trying a new tactic: Create a Star Chamber “impeachment” process fueled by anonymous whistleblowers and selective leaks that is not so much designed to remove the president, though they would if they could, but to manipulate the 2020 election…By cloaking witnesses with the protection of whistleblowers, the whistleblower protections are being abused. In response to the announcement of Whistleblower No. 2, we remarked: “Abuse of whistleblower protections. This person is simply a witness to someone else’s complaint who already has been interviewed. Weaponization of whistleblower laws is yet another breach of norms in effort to unwind 2016 election.”…With Whistleblower No. 1 failing to fulfill the mission, there was a leak to the NY Times of a potential Whistleblower No. 2. That’s how this is going to work, there will be leaks to the media to frame the public narrative just like regarding supposed Russian-collusion.”

I think this is probably right.

Wrong. How can a poll “prove ” anything? Yet polls are always being offered as “proof.” It isn’t even honest to describe them as evidence.

2. Submitted for your disapproval…Here’s a twitter exchange submitted to Ethics Alarms by the tweeter who called the Times pundit and alleged tech maven on her partisan, censorious and ridiculous argument that Twitter should ban President Trump. 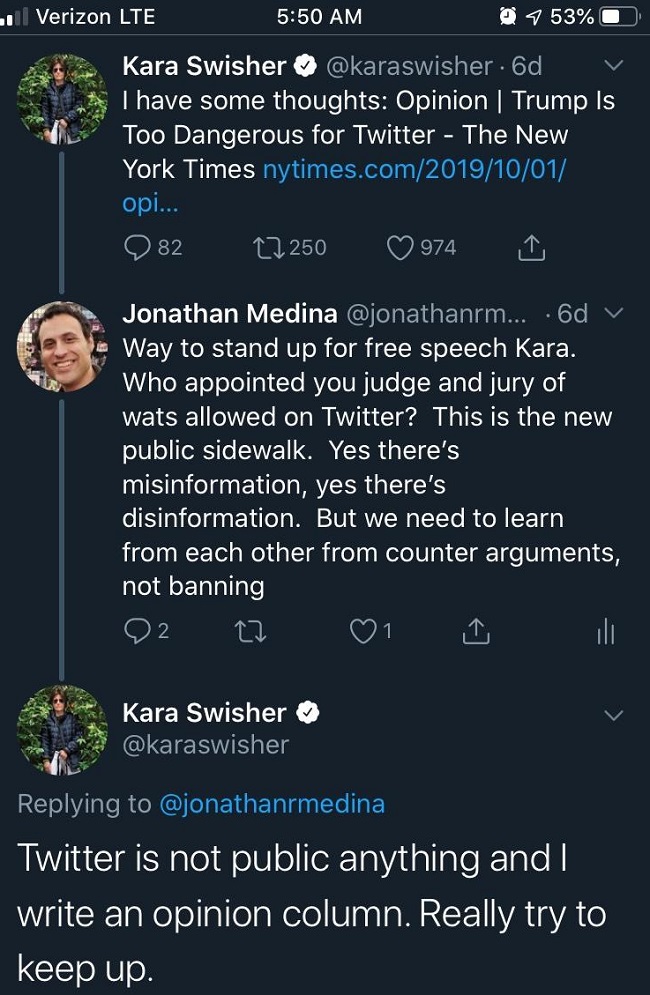 3. Excepting politics, Thomas Markle is a front-runner for Jerk of the Year. Certainly he wins the Parental Division. The Duchess of Sussex, his daughter, and the American member of Great Britain’s Royal Family sent her estranged father a handwritten, heart-felt letter last year hoping to build toward some kind of reconciliation, and he, in turn, shared most of it with the news media. “I decided to release parts of the letter because of the article from Meghan’s friends in People magazine,” Thomas, 75, told the Mail.   “I have to defend myself. I only released parts of the letter because other parts were so painful. The letter didn’t seem loving to me. I found it hurtful.” 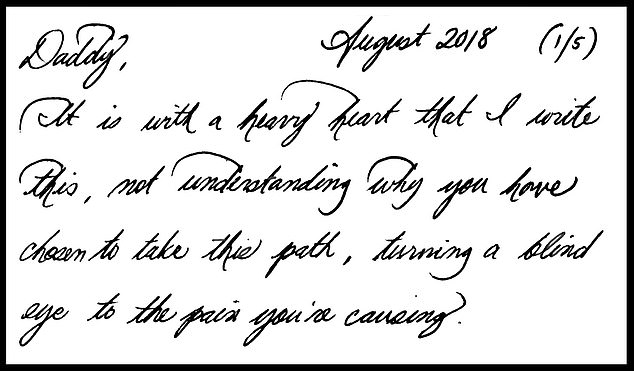 Markle has been trying to find a way to cash in on his daughters’ union with Prince Harry from before they took their marriage vows, and seems to be willing to take any measures that might keep the press hounds interested in him. It is a betrayal of trust to share a private, personal letter with anyone, certainly with the press, without receiving permission from the letter’s author. The same is true of emails, though the ease of transmission with the latter makes expectations of privacy a bit less reasonable.

Expectations of decency, however, especially from one’s father, should always be reasonable.

4. Quick now, who else do you feel may be gaslighting you? Nearly half of all women and men in the U.S. have been subjected to psychological aggression, or “gaslighting,”  by an intimate partner, according to the Centers for Disease Control and Prevention. “Gaslighting,”  a term inspired by the classic 1944 movie “Gaslight,” in which a criminal husband (Charles Boyer) sets out to make his wife (Ingrid Bergman) think she’s going crazy (a remake, “Midnight Lace,”  starred Rex Harrison and Doris Day),  is a particularly  insidious form of psychological abuse. Its hallmarks, according to The National Domestic Violence Hotline, are when the abusive partner: