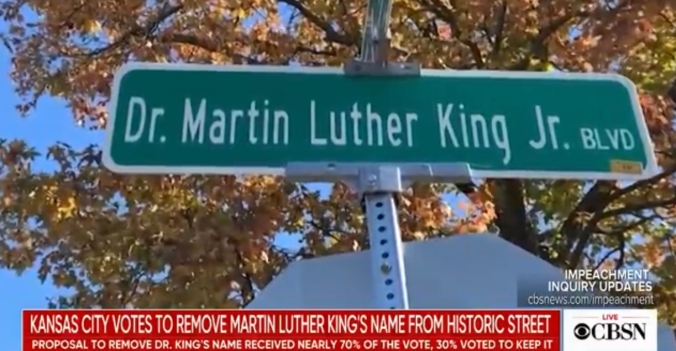 When I read the headline about the reversal of the name-change for the old boulevard in Kansas City, I was secretly hoping it would be because of recent credible revelations that Reverend Martin Luther King had facilitated a rape, and worse. In May, King biographer David Garrow unearthed previously classified FBI documents showing that King was a bad guy in private by any measure, even using a Donald Trump or a Bill Clinton standard. I had written at the time,

“I want to see the ignorant, doctrinaire college students, progressive history censors and pandering politicians face this crisis and either live up to their alleged virtues and censorious standards, or admit that they were dead wrong, as I and many others have been saying all along….

As a civilization, we must recognize and honor the many, many men and women of all races and origins who have made humanity better by their public deeds, intellectual advancements and accomplishments in civic life, war and peace. Few of them, if any, did not have serious flaws or engage during their lives in conduct that today, or even in their own times, would be considered reprehensible. Using these acts, and solely these acts, to assess which historical figures are worthy of being remembered by future generations leads to a societal suicide, embracing a culture without heroes or aspirations.”

I was thus hoping that the statue toppling side of the political spectrum was being forced to sample some of its’ own  medicine, and that King had lost an honor using the same, misguided principle that had the Democrats removing the names of their party’s founders, Jefferson and Jackson, from their annual dinners. Sauce for the goose, sauce for the gander, and perhaps when the gander realizes it’s bitter and stupid sauce, it will smarten up.

No such luck. It doesn’t seem as if King lost his street because he was a sexual predator, just because more Kansas City voters than not thought the old name shouldn’t have been changed in the first place

Steve-O-From NJ, however, does seem to be right about double standards where honors are concerned.

Here is his Comment of The Day on #4, the Kansas City Street Name Battle, in the post, “Evening Ethics Update, 11/7/2019: Dr. King Is Un-honored, Virginian Republicans Are Non-Functional, Fox News Is Pro-Darkness, And Joy Behar Is Still An Idiot”…

[Incidentally, has anyone read any hint of acknowledgment from the U.S. media, African-American groups or the NAACP that Garrow’s information raises a question about the propriety of honoring Dr. King? Neither have I….]

After two years of statue-toppling and other attempts to erase history, it should come as no surprise that eventually someone should suggest yanking something down dedicated to some darling of the left. The fact is that no city is REQUIRED to have a street named for King, nor is any citizen REQUIRED to honor him. In fact, as has been pointed out here, MLK was far from a saint in life, particularly with regard to his poor treatment of women. There is enough reason to criticize him to justify questioning why he should be honored at all, particularly in light of the current attacks on other (much more significant and influential) historical figures such as Columbus and Jefferson.

Of course the Left, and the black community in particular, doesn’t see it that way. If you’re lucky, they’ll just give you a non-answer, to the effect of the one is nothing like the other. If not, they’ll accuse you of being a racist, not because you said something affirmatively racist, but because you failed to give what they believe is proper deference to one of their icons.

I think this ties in with the posts I have made in the past about how the Left wants a monopoly on honor. They want to be able to dictate who can be honored, what can be honored, and where, when and how any honoring can be done. They also want to be able to dictate who and what cannot be honored, who and what must not be honored, and where, when and how honoring is not allowed to be done. What is more, they want to be allowed exclusive use of certain arguments for and against honoring. If someone yanks down a street sign for MLK because mailing has become confusing or renames Medgar Evers Park because the demographics of the area have changed, that’s considered racist. If someone took down a similar street sign once put up for RFK or renamed De Valera Park for the same reasons those actions would be encouraged, and anyone who challenged them would be told to get with the program.

The thought, I believe, is that any renaming, changing, etc. that displaces white for color or majority for minority is to be encouraged. The reverse is considered racist. There is also an unspoken thought that any new naming, etc. that promotes someone or something of European descent, especially involving men, is passe’ and represents a lack of outside the box or imaginative thinking on the part of the namer. There is a much more open thought, probably first given organized articulation by Howard Zinn, that American men of European descent have lost the privilege of being honored because they have caused nothing but misery for women and people of color from the moment they landed on this continent.

What’s more, they lump all of Europe, a continent of 44 nations, 87 ethnicities, 200+ languages (including at least 2 that are nothing like any other), and 2 dozen or more faiths into one classification: white. It doesn’t matter that many of those Europeans had plenty difficult times of their own when they first arrived, white is white is white, whether it be a Lutheran from Sweden, a Catholic from Italy, or an Orthodox person from Greece. They’re part of the majority that did all these horrible things, and what’s to honor about that? If anything, that majority needs to be shamed.

That’s why there was a huge brouhaha in Jersey City recently about a monument to the victims of the Katyn Forest Massacre. The local government and developers wanted to move the (admittedly somewhat jarring) monument to where it would be less prominent. The Polish-American community objected rather vociferously. Finally the powers-that-be relented, but the general consensus seemed to be “Good grief, what is the big deal? It’s only a monument to a bunch of European officers, can’t these people get over it?”

That’s why a lot of communities are floating the idea of taking down the various Columbus statues, and, when we Italians object, saying it’s telling us our history doesn’t matter, the reaction from other folks is “Come on, this guy isn’t a hero, he’s anything but, and you people are now part of the majority. You don’t need a special celebration anymore.” Unfortunately, at least in NJ, we are between 20% and 25% of the population, and that’s too big of a bloc to mess with politically. So our statues and celebrations are grudgingly left alone, but we get constantly reminded of just what an awful person Columbus was, and told, “All right, you are too strong here to overpower and we accept that, so we’re asking you to voluntarily do the right thing, get on the right side of history, and step aside. Take down the statues (we will hate you slightly less if you pick up the cost yourselves), cease your celebrations, and join instead in the celebration of those your people cruelly wronged. You might, just might mind you, get on the path to redemption.”

On the other hand, if you dared suggest renaming Nat Turner Park, because a rebel slave who murdered white people who had nothing to do with slavery was maybe not the best role model, or if you dared point out that maybe Margaret Sanger had some less than wonderful ideas about a few things, so maybe her statue needed some explaining, or, God forbid, you pointed out that the Jewish population in this town had mostly either died off or moved to Florida and the local synagogue had closed, so maybe we don’t need that memorial to the Holocaust in the square anymore, you’d be condemned as a backward racist pig. And MLK can’t be touched, not no way, not no how.