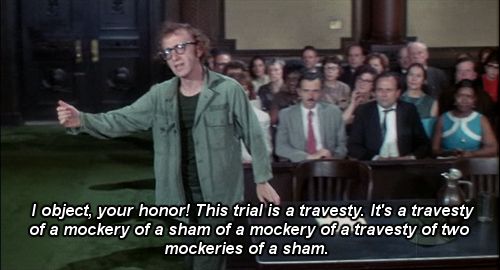 As I predicted yesterday, upon being informed that the plaintiff’s motion to reconsider the rejection of his appeal of the trail court’s rejection of his defamation suit had also been rejected, the now-banned Ethics Alarms commenter filed a petition for “futhur Appellate review” with the Massachusetts Supreme Judicial Court.

The argument presented is an extension of his appellate brief, which erroneously relied on Milkovich v. Lorain Journal Co., 497 U.S. 1 (1990), a Supreme Court case that is not germane to this one. The plaintiff isn’t a lawyer, though he is inexplicably confident of his legal analysis skills, which is unfortunate for both of us, as well as the poor judges and clerks in Massachusetts who have to waste their time and the State’s money dealing with these flawed motions and appeals.

The reason there was no defamation and could be no defamation is that my opinions of the plaintiff and his motives, harshly expressed as they may have been, were based entirely on what he had written on the blog and an email to me that I quoted, as well as the plaintiff’s own blog, to which I included a link. The core of defamation, be it libel or slander, is alluding falsely to or asserting some undisclosed event or conduct that a reader or a listener has no way of knowing whether it is in fact true or not. That was indeed the situation in Millkovitch, where  a newspaper columnist’s account of a brawl at a high school wrestling match reported that one of the teams’ wrestling coach, Millkovitch, had incited the riot and lied about it.

Well, there was no way readers could check on that version of the facts, and when it was shown that the report was false, that made a columnist’s “opinion” that  it was true libel, and defamation. “The connotation that petitioner committed perjury is sufficiently factual to be susceptible of being proved true or false,” the Court concluded.

A first year, first semester law student of reasonable attentiveness would know enough not to rely on a case that was so easily distinguished from a defamation claim based on a characterization of comments that could easily be read and assessed independently. This encapsulates the problem inherent with pro se litigants. They cannot be punished for abuse of the justice system or the courts, and fairness requires that their inability or unwillingness to pay for a competent lawyer not interfere with their access to the system. Nor are they held to the ethics standards lawyers are. A lawyer repeatedly demanding review of the decision in a lawsuit that was specious to begin with would eventually run afoul of Rule 3.1, prohibiting frivolous actions. A lawyer relentless pursuing a futile case because he is angry and wants to inconvenience his perceived foe as much as possible would  be subject to discipline for abuse of process and misrepresentation.

In the current case, I am fortunately out of the crossfire. I asked the clerk of the court whether I needed to submit any formal opposition to the latest misguided motion, and he said, curtly, “No.”

6 thoughts on “Spurious And Vindictive Litigation Ethics: An Update On The Ethics Alarms Defamation Lawsuit”