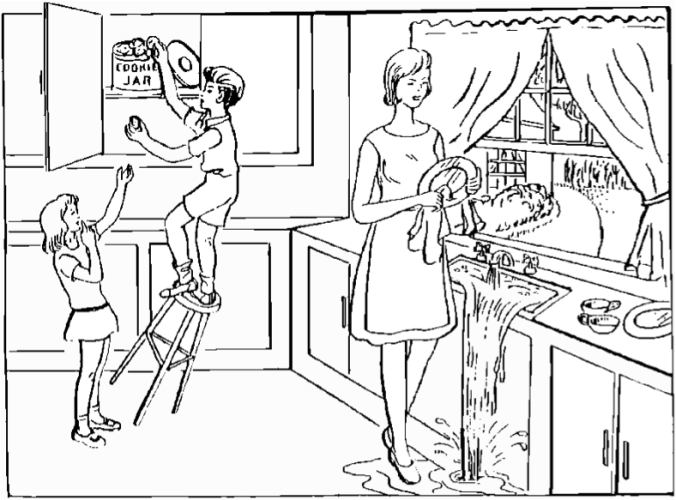 I’m not going to make a habit of it, but today I’m doing a second short form post. First, I’m backed up, thanks to losing a day; second, There was no warm-up for this date, since I posted yesterday’s overview this afternoon; third, I’m not feeling so hot, after all the tests, anxiety, and no sleep at all.

In the past, I have tried to explain—nicely—that this kind of fake natural history is nonsense and impossible in too many ways to count, discussed the timeline and the fossil record, and tried to bring them into something approaching enlightenment. This has never done any good at all if my audience was over 30, and usually just made them angry and convinced that  I’m the idiot as well as a pagan.

Yet ignorance is a social disease, especially this particular variety. I don’t think it’s responsible or kind  to enable the spread of misinformation.

Could it be more gender stereotyped?

This was, culturally, a much healthier tradition than what we have now—unifying, respectful, responsible. I see ostentatiously foreign-sounding names as defiant, and signaling a determination to avoid assimilation, to enjoy the rights and privileges here, without fully committing to them. I definitely regard any problems and inconvenience resulting from keeping the names Ngongsa or Ijeoma entirely self-inflicted.

2. Pete Buttigieg is an idiot, or he’s a shameless panderer. After attending services at the Rev. William Barber’s Greenleaf Christian Church in Goldboro, North  Carolina, Buttigieg stayed for a discussion with the Poor People’s Campaign.  Barber, a pastor and former North Carolina NAACP president, revived the movement that dates from Martin Luther King, and focuses on so called “social justice, Buttigieg is trying to enhance his so-far lagging appeal to African Americans.

The discussion turned to illegal immigration, and the two tried to top each other with fatuous rationalization for open borders. “Undocumented folks are, in many ways — like Social Security — subsidizing everybody else,” Buttigieg said. What…the HELL…is that supposed to mean? Never mind–literally none of the Left’s arguments for letting anyone waltz across our borders, violating our laws, make any sense, but that’s especially egregious. Then Butler said this:

“And we need to talk about that. We call people ‘illegal aliens’ and all these things that are not human and certainly not Christian. Why can’t we just own in America that some of the people that are trying to come from Mexico here are coming back to land we stole?…And the reason we took the land is because people wanted to keep their slaves? I mean, we have to have some historical clarity around these issues.”...

Yeah, that’s “historical clarity,” all right. Try listing all the historical, legal and logical gobbledygook in that statement; I don’t have the energy. I will only say, once again, that it is unethical for leaders to make their followers stupid, or stupider.

And Pete Buttigieg, Harvard and Oxford grad and Rhodes scholar, nodded  as the audience applauded.

Will a mainstream media debate moderator ask Mayor Pete if it is correct to say that Mexicans have a special right to “take back stolen lands”by illegally entering our country?  Follow-up questions: Does that mean that only Mexicans should be allowed to get a pass on illegal immigration? Does it mean that they should only be legal when they stay in Texas, California, Nevada, Arizona and New Mexico? What about the estimated 6 million illegals who flew here on visas and stayed? Are Koreans entitled to take back “stolen” lands?

3. Enemy of the people? President Trump’s 2020 campaign announced today that it will no longer credential Bloomberg News reporters for its events following the outlet’s announcement that it would not conduct investigations into the Democratic presidential candidates, but would continue to probe the Trump administration.

From the conservative satire site The Babylon Bee: “Nation Looking For Right Phrase To Describe Media That Behaves Like Some Kind Of Adversary Of The Populace.”

4. Hope. no hope. The fact that the flagrantly phony and inept Kamala Harris’s campaign is in freefall shows that you can’t fool all of the people all of the time, and that Democrats are not, as it has often seemed, completely unhinged. Similarly the fact that mega-demagogue Elizabeth Warren is declining in the polls bodes well for the viability of democracy.

But is the party really so incompetent and rudderless as to nominate Joe Biden, clueless sexual harasser, vaguely disoriented and anachronistic bumbler that he is? From the excellent and amusing Battleswarm Blog: “He launched a “no malarkey” tour of Iowa, evidently because that tested better than “Cut the Jibber Jabber,” “Dagnabit,” or “I Wore An Onion On My Belt, Because That Was The Style At The Time” as a tour name. On that tour, he chewed on his wife’s fingers while she was speaking, like a playful Rottweiler puppy.”

Then in a video from 2017, the The Daily Caller reported, Joe is seen rambling on about how  kids used to play with his leg hair when he worked as a lifeguard and how he’s “loved kids jumping” on his “lap,” saying,

“I got a lot of — I got hairy legs that turn, that, that, that, that turn blonde in the sun. And the kids used to come up and reach in the pool and rub my leg down so it was straight and then watch the hair come back up again. They’d look at it. So I learned about roaches. I learned about kids jumping on my lap. And I’ve loved kids jumping on my lap.And I tell you what, the men are now all men. The guys I worked with down here, and they’re all guys at the time, they’re all good men.”

26 thoughts on “12/2/2019 Ethics Update, So I’m Not One Day Behind Forever: Hospital Stay Observations, And Other Things”