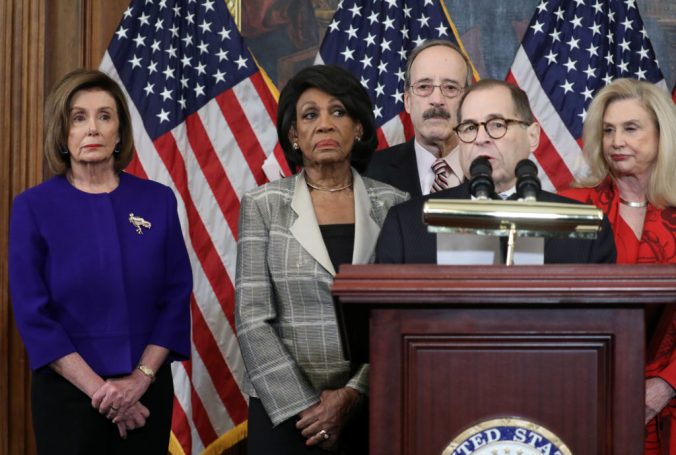 Before getting into the selected items and outrages, let me say again that I don’t think I have ever known any issue to so hollow out the skulls of so many usually rational intelligent people—either that, or somehow create a mass ethicsectomy. Today on Facebook one of those erstwhile bright and informed individuals among my legally educated friends decided to pander to the Borg and hold a poll regarding the “worst defense against impeachment.” His #1 was that the impeachment was really an attempt to undo the 2016 election. I stopped reading right there, and you can imagine, regular readers, what I wrote, but it ended with this, with which I assume you are familiar. Of course, I could have also used this, in which we learn that Democrats indicate that they intend to keep investigating the President and seem likely to keep impeaching him until they are stopped.

1. Let’s start with the massive hypocrisy, nicely noted by David Hirsanyi. Why his piece? Because it encapsulates what is one of the biggest ethical offenses of th entire fiasco, the Democrats concocting double standards specifically to wield against this President, while daring the public not to notice…or to notice and corrupt themselves by supporting the coup efforts anyway. He wrote in part,

Not very long ago, [Democrats] were rationalizing and cheerleading unprecedented abuses of power under the Obama administration. And they’ll be cheerleading for more abuses of the Constitution the next time they win the White House.  Nancy Pelosi can dress in black, recite the Pledge of Allegiance, and act as if this impeachment is her solemn obligation, but everyone saw the Democratic party’s hysterical reaction to the 2016 election. Everyone saw dozens of candidates running in 2018 — either implicitly, but most often explicitly — on getting rid of the president. Just last week we learned that people within our intelligence agencies subverted the law to help Democrats concoct a three-year national panic meant to undermine the veracity of a fair election…. If your contention is that the Constitution protects abortion on demand through the ninth month but are fine with undermining property rights, gun rights, religious freedom, and any meaningful separation of power, you’re not a custodian of the Constitution, you’re partisan with an agenda. So do what you must. But it’s been insufferable watching you playact sentinel of the American Republic — whose presumptions, institutions, documents, and Founders you don’t really seem to like very much.

2. Back to you, Alan Dershowitz, who wrote a clear and convincing explanation in The Hill of why both Articles of Impeachment failed Constitutional standards. Key paragraph:

Both are so vague and open ended that they could be applied in partisan fashion by a majority of the House against almost any president from the opposing party. Both are precisely what the Framers had rejected at their Constitutional Convention. Both raise the “greatest danger,” in the words of Alexander Hamilton, that the decision to impeach will be based on the “comparative strength of parties,” rather than on “innocence or guilt.”

3. Polls cannot be trusted, and in this area especially there have been polls to support every confirmation bias, The story here, however, is how the Democratic Party/”resistance”/ mainstream media has  so entered the zone where they are walled off from reality that they literally can’t handle the truth. CNN legal hack Jeff Toobin (I’m sorry, but that’s what he is) threw an on-air fit as  he rejected the results of CNN’s own poll showing  Democrat support for impeachment dropping from 90% down to 77%. (The reason for this, Jeffrey, is that it is dawning on the smarter progressives  that this divisive and dangerous scream at the sky will make the President stronger).

After Alisyn Camerota did some spinning, saying “Democrat support for impeachment had softened “a little bit”—this is another variety of fake news: deliberate mischaracterization—Toobin erupted, “I don’t believe that poll for one second, the 90 to 77%. I don’t believe it! It makes no sense that that number would change like that . . . David [CNN political director David Chalianong], that poll is wrong. Just because I said so, okay?

This gives us some sense of what the reaction will be when Trump wins the election in 2020.

4. Incredibly, Senate Minority Leader Chuck Schumer is demanding a full trial in the Senate, including new evidence. ”To engage in a trial without the facts coming out is to engage in a cover-up.” Thus he admits that the House impeached the Presient with insufficient facts to do so, one of the points made by Professor Turley in his testimony. Democrats, having botched impeachment by picking a weak charge, are hoping to uncover some smoking gun, like the tapes that led to the resignation of Richard Nixon.

Mitch McConnell, who has fallen into second place an my list of most unethical members of Congress (behind Adam Schiff), properly   responded,  “The Senate is meant to act as judge and jury, to hear a trial, not to re-run the entire fact-finding investigation because angry partisans rush sloppily through it.”

5. Related to impeachment and how we got here:  The FISA plot;

Got that? There were serious mistakes, all of which had the effect of unjustly targeting the Trump campaign; there was evidence of bias, but no clear evidence that tied the bias to the “errors”—though that would not be an unreasonable conclusion.

The judge is questioning all the other warrants sought by the FBI, and Horowitz is already looking into other cases.

“FBI and DOJ officials did not ‘abuse’ the Foreign Intelligence Surveillance Act (FISA) process, omit material information, or subvert this vital tool to spy on the Trump campaign.”

“DOJ’s warrant request was based on compelling evidence and probable cause to believe Page was knowingly assisting clandestine Russian intelligence activities in the U.S.  DOJ told the Court the truth.”

Asked to explain on several news programs how he managed to state as fact what was not true, Schiff had no plausible explanation.

6. Regarding Schiff: His memo was used to deny the claims made in Rep. Devin Nunes’ memo, a memo, perhaps you remember, that the mainstream news media ridiculed as partisan spin. Yet virtually every major point in the Nunes memo was substantiated by IG Horowitz’ report, while Schiff’s response was shown to be the smokescreen it was.

Fox News gray eminence Britt Hume, asked his reaction to Schiff’s claim that he was shocked–shocked!—that the FISA process was rigged, replied,

“What he says flies in the face, of course, of the IG report but it also flies in the face of the much derided Devin Nunes memo that grew out of the Nunes-led House Intelligence Committee investigation…and the whole Trump-Russia affair.”For Schiff now to claim, when he not only saw what Nunes said but published a memo of his own rebutting it, that he didn’t know about those abuses is preposterous! … Well of course he knew about it.”

“Well, one of the wonders, to me, of modern media is the failure of my colleagues in this business to see through this guy Schiff. He has been dishonest repeatedly. He made extravagant claims about the amount of evidence he had of Russia collusion, evidence that it turned out that not even the Mueller team with all of its investigative powers did not discover and that he, Schiff, never specified. Of course the report came out and basically blew up this whole Russia collusion theory. Now comes this whole question of FISA abuse and he’s still telling whoppers about that. It’s amazing that he isn’t called out. And then of course he gets tapped by Nancy Pelosi to lead the impeachment inquiry. Wow!”

Is it really such a wonder to Hume that the mainstream media has refused to highlight the dishonesty of the primary architect of the Trump Impeachment, or can we add his name  to the depressingly long list of journalists unwilling to call out his colleagues for their biased, enthusiastic and partisan participation in the Democrats’ coup ettempt?