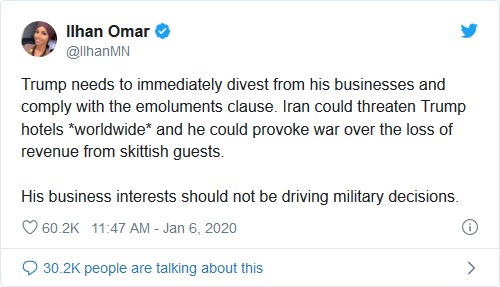 The first reaction some had to this uniquely damning tweet is that Omar was suggesting to the Iranians that they attack the Trump organization hotels. Oh, who knows what her intent is. If it isn’t clear by now that Rep. Omar has greater loyalty to and regard for her Islamic faith and the nations that embrace it than she does for the country where she serves as an elected representative, I don’t know what more she could do or say.

It’s marvelously idiotic tweet. House member though she is, Omar doesn’t know what the emoluments clause means: the archaic Constitutional provision addresses foreign bribes, not potential conflicts of interest arising out of foreign threats. Moreover, if the President put his business interests over national interests, that would lead him to avoid taking action which might risk his business interests.

She does deserve credit for managing to come up with a false motivation for the President killing a vicious terrorist that is even more ridiculous that Elizabeth Warren’s “Wag the Dog” theory.

Omar is openly anti-Semitic, hostile to American interests, and appears to have the reasoning ability of a planarian. The Minnesota district that inflicted her on the nation is accountable for her pollution of the national discourse: there is no conceivable excuse for electing someone with her biases, proclivities, and lack of qualifications.

The Republicans had the sense and integrity to isolate Steve King for his repeated ugly statements evoking ignorance and bigotry. The Democrats should do the same with Omar, and if they do not, it will be fair to ask why. Either they endorse her vile lunacy, or they are too cowardly to risk accusations of being bigoted against Muslims, women, and “house members of color.”

23 thoughts on “Unethical Quote (And Tweet) Of The Month: Rep. Ilhan Omar (D-Minn.)”