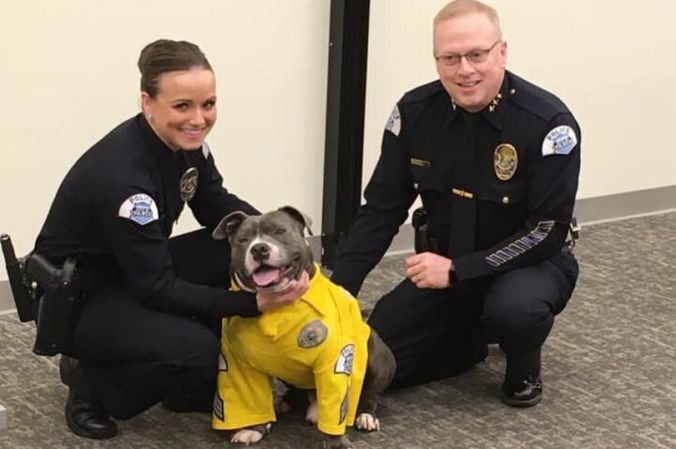 Well this story is calculated to make any dog-lover teary. Having lost my beloved Rugby last yearand not yet been able to consider a successor, I read it while having to constantly adjust my “don’t be an idiot” controls.

Eddie the pitbull, in the care of Mikey’s Chance Canine Rescue in Benton County, Washington, has an inoperable brain tumor. He’s been given six months to live, and the staff  decided to make his final days as much fun for him as possible by creating various “bucket list” experiences.  One recent example was giving Eddie  “his dream” of being a crime dog, and and as soon as local police heard about Eddie, they pitched in.

The officers gave Eddie his own police jacket, then set him down in a pool filled with toys. Then Eddie accompanied the police in the front of a squad car as they toured the town requesting donations for the rescue shelter.

On their Facebook page, the Pasco Police wrote: “We have finished our amazing day with K9 Eddie and we are overwhelmed with the amount of support the community has shown him. Eddie was welcomed everywhere he went and shown nothing but love and affection all day. Finally, we want to wish Eddie all the best with his bucket list and future endeavors.”

Your Ethics Alarms Ethics Quiz of Day is…

Isn’t this exploitation? Does anyone think Eddie really has a “bucket list”? Do the police, rescue staff, or saps writing the linked article or the citizens of Benton County believe for a second that Eddie is any happier being subjected to jackets, police car rides and photo sessions than he would be just having some attentive humans, ideally kids, sitting with him and rubbing his tummy?

Sure, it’s nice exploitation. But isn’t Eddie really being used as a fundraising device for the shelter and PR stunt for the police? I shudder to think what his other contrived bucket list activities will be. Has he always wanted to see an opera? Have dinner at a 5 star restaurant? Meet Joe Biden? Kendall Jenner? Greta Thunberg?

Or does it matter? Eddie doesn’t know he’s being exploited, He’ll just enjoy the attention.

Something here is pinging my ethics alarms, but I can’t quite identify it…