Thank-you for your service!

In honor of our Presidents, Ethics Alarms is  posting some of the best and most important Presidential speeches during the day. We’ll see how many I get up; there are a lot of excellent ones to choose from.

In all of these cases, whichever I post, a President was acting in one of the non-partisan functions of the office, when the President’s job is to represent all of our nation’s citizens. It is a disturbing fact that the current President has been virtually blocked from discharging these duties, as part off the long, relentless effort by the A.U.C.—the Axis Of Unethical Conduct: Democrats, the “resistance,” and the mainstream media—to deny his Presidency’s legitimacy and to reduce his support among the public to the point where it becomes politically feasible to remove him without an election.

The nation needs those non-partisan Presidential moments, because they symbolize unity and strengthen, rather than weaken, our bonds: throwing out the first pitch of the baseball season, attending the funerals of distinguished Americans, hosting the Kennedy Center Honors. It is not this President’s fault that he had been prevented from doing his job.

1. Why look! Here’s another example! Yesterday President Trump, having been invited to serve as grand marshal for the Daytona 500, uttered the traditional “Gentlemen, start your engines!” and boarded  his official limousine, nicknamed “The Beast”, and, with a U.S. and Presidential flag on the front fenders flapping in the wind, headed out onto the track, pacing the full field of cars. 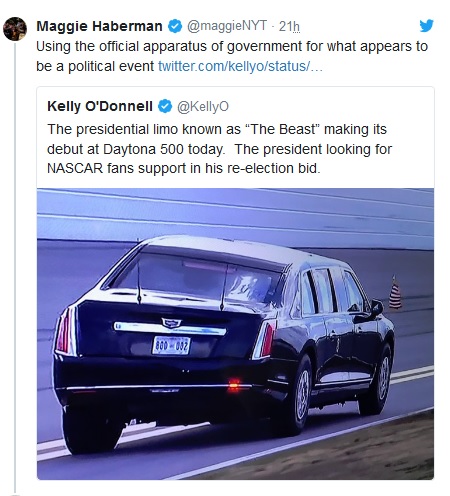 This is smoking gun bias from the journalist the Times uses to inform its readers about what this President does.

2. Now Trump’s stupid tweets, however, are another matter entirely.  Politico reports on what District Judge Reggie Walton, a Reagan appointee,  had  to say about President Trump’s gratuitous social media commentary on the McCabe investigation:

The public is listening to what’s going on, and I don’t think people like the fact that you got somebody at the top basically trying to dictate whether somebody should be prosecuted. . . . I just think it’s a banana republic when we go down that road. . . . I think there are a lot of people on the outside who perceive that there is undo inappropriate pressure being brought to bear. . . . It’s just, it’s very disturbing that we’re in the mess that we’re in in that regard. . . . I just think the integrity of the process is being unduly undermined by inappropriate comments and actions on the part of people at the top of our government. . . . I think it’s very unfortunate. And I think as a government and as a society we’re going to pay a price at some point for this.

3.  I don’t know why Richard Dawkins would choose to leap into this particular cactus patch, but for some reason he tweeted this morning,

“It’s one thing to deplore eugenics on ideological, political, moral grounds. It’s quite another to conclude that it wouldn’t work in practice. Of course it would. It works for cows, horses, pigs, dogs & roses. Why on earth wouldn’t it work for humans? Facts ignore ideology….For those determined to miss the point, I deplore the idea of a eugenic policy. I simply said deploring it doesn’t mean it wouldn’t work. Just as we breed cows to yield more milk, we could breed humans to run faster or jump higher. But heaven forbid that we should do it.”

But of course, people were determined to miss the point, because Dawkins, in addition to being a scientist, a scholar and an ethicist (Wikipedia calls him an “ethologist.” Cool!), is an outspoken atheist, and a many hate him.

In this case, Dawkins is 100% right, and the various rebuttals to his statements are illogical, emotional, or worse. The Right Wing media was particularly dishonest—Nah, there’s no conservative news media bias!—with The Wire, for example, headlining his tweets, “Famed Atheist Richard Dawkins Bizarrely Defends Eugenics.”

By no possible interpretation could Dawkins’ statement be called a “defense” of eugenics. If I stated that the extreme nut-roll climate change fanatics who are advocating the extermination of humanity as the best way to address global warming —yes, there are such lunatics—were correct that it would work, but that the idea is certifiably insane, woukd that be defending self-genocide?

4. But then even mainstream media journalists have attacks of integrity now and then. Take ABC’s Martha Raddatz, previously noted on Ethics Alarms for her clear conflicts of interest which ABC chose to ignore in selecting her as the moderator for the 2012 Vice-Presidents candidates debate, and which she exhibited by allowing Joe Biden to interrupt, sigh, eye-roll, duck questions and generally act like a jerk.

Interviewing Tom Steyer yesterday, the other billionaire who is trying to buy the Democratic nomination for President, Raddatz insisted that Steyer concede the existence of reality.

Here’s that section of the transcript;

RADDATZ: Mr. Steyer, you say that you can take on Donald Trump on the economy. But the latest Quinnipiac national poll again released just this week says 70 percent of voters describe the nation’s economy as excellent or good. So how do you convince them that a change is needed when they think they’re doing so well under Donald Trump?

STEYER: I think if you take a look at what he says, everything he says superficially sounds right but is actually a lie. So when he says the economy is growing, I can show that, in fact, all the money’s going to rich people. When he says unemployment is low, which is true, I can show that the wages people are getting don’t support a family. And when he says the stock market is up, these are his three big statistics, it’s largely because of the huge tax break he gave to big corporations, but it also is — doesn’t matter that much because most of the stocks — 85 percent of the stocks are held by the top 10 percent of — 10 — ten percent of the richest Americans.

RADDATZ: But — but I want to go back to that 70 percent number…. you talk about the wealthy. They’re not all wealthy people. Seventy percent say the economy is good and they’re doing well.

STEYER: Well, I’m just saying to you, here we are on a show and you’re standing up for Mr. Trump’s version of the economy. And I’m telling you, what he’s saying is not true. And so —

RADDATZ: So how do you —

STEYER: I can take him on, on that because it has to be shown that this economy actually isn’t working for the vast bulk of Americans and this president is dangerous to them in terms of money and in terms of health care and in terms of retirement. That’s not being told. Democrats are going to have to take him on directly.

Translation of Steyer’s attitude: “My mind’s made up, don’t confuse me with facts.” This is apparently going to be the main Democratic line of attack during the campaign, whoever gets the nomination, along with “Orange man bad,” of course: “Who are you going to believe, me, or your own two eyes?”

For the Democrats, this is shaping up to be the Jumbo campaign.

5. Today’s Houston Astros sign-stealing scandal update: Yesterday, I wrote about the Dodgers’ Cody Bellinger claiming that Astros starJosé  Altuve “stole” his MVP award in 2017 because he was getting the benefit of his team’s illegal sign-stealing system. Astros shortstop Carlos Correa angrily defended the Bellinger’s allegation, saying, in effect, that Altuve was so good he didn’t need to cheat.

I decided to check: was Altuve notably better in 2017 than in the previous season, when the Astros weren’t stealing and relaying opposing catchers’ signs to pitchers?

Note the 2016 and 2017 season lines. Altuve was a teeny bit better in 2017, but the seasons are basically identical. He also struck out more and walked less often in more at bats in 2017. If getting signs relayed to him was helping Altuve in a significant way, the stats don’t show it.