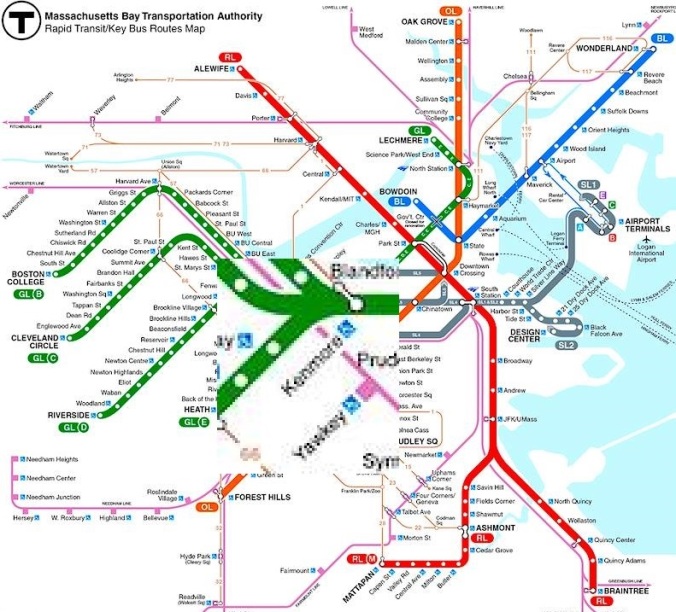 (I enlarged the two Fenway Park stops for your convenience…)

I grew up rising the buses and  subways in Boston, and later oversaw a huge U.S. Chamber of Commerce study on transportation infrastructure funding problem (hopeless then, much worse now) , so the Boston Councilwoman’s fascinating theories about how making public transit in Beantown free to riders immediately interested me…since I knew it was crap.

I probably should delve into this issue more frequently, so I was pleased and relieved that fellow New Englander Rich in CT gave us this Comment of the Day on the post, “More Evidence That Arthur Herzog’s Novel “IQ 83” Is Coming True—Beside The Fact That Bernie Sanders Is Leading The Race For The Democratic Nomination, That Is”:

The economics of public transportation are counter intuitive, and this plan is not as insane as it sounds. However, for a city like Boston, it would be absurd to eliminate ridership fare.

Let’s look at my hometown. We have one bus hourly from 7 AM to 10 AM, and 2 PM to 6 PM, that connects to a neighboring city. The farebox recovery ratio is about 15%: For every dollar spent on the service, customer fares return $0.15 – 15 cents on the dollar.

The bus is provided as a bare bones courtesy for those who need it. If the bus company raises the fare, ridership will go down, because people cannot afford to use it anymore (they then cannot get to work…). Fare recovery goes down with an increase in fare, but the cost of running the shuttle remains the same. The very population it is meant to serve is not served. We’d be running an empty bus back and forth.

In all truth, my town subsidizes 100% the cost of the shuttle under its contract with the city; the $2.00 fare effectively pays for the transfer to a city bus. Eliminating the bus fare only modestly increases the necessary public subsidy; any expansion of hours or geographic distance would also require an increase in subsidy.

If we look at a city like Boston, the economics are very different. The service is still provided for those who need it, but a great many more need it. The fare box recovery is closer to 30%-50%. The cost of the service is the same whether people are on it or not, so the city offers discounts for bulk purchases to attract people who would otherwise use a car. This has the positive effect of increasing ridership and improving the fare box recovery slightly; it also has the perverse effect that the people who need it the most pay the most for it.

Bus and/or train service, like any service, is subject to supply and demand. Raise the fares, and demand goes down. However, as ridership goes down, the farebox recovery goes down, and the public subsidy goes up; the cost of operation does not change. You need to find the careful sweet spot where ridership is affordable for those who need it, attractive to those who don’t need it, yet economically viable given the available public subsidy.

The city needs to do an economic forecast to compare the cost of public subsidy at increased rates to fund capital improvements, versus the cost of maintaining (or cutting) current levels. This is a complex model, balancing time lost to traffic delay from people repelled by increased fare or decreased service, the cost of delay due to service breakdowns, and perhaps most difficultly by also least easy to forecast, the cost of denied opportunity for people who cannot get jobs because they cannot afford the fare.

It is a perverse loop: fewer people employed, fewer taxes collected, the burden of subsidy falling a smaller few. It can also be a synergistic loop: more people employed, fewer lost hours of work due to traffic and breakdowns, more taxes collected, the subsidy being spread across many. One hundred percent subsidy is a fool’s errand (look at the state of our untolled highways and bridges), but the economics of increased subsidy can certainly have a positive projection.

The community must accept the risk.

4 thoughts on “Comment Of The Day: “More Evidence That Arthur Herzog’s Novel ‘IQ 83’ Is Coming True—””