When President Trump tweeted that Michael Bloomberg was a  “5’4” mass of dead energy,”this instantly was seized upon by “the resistance” and the news media (like NPR) as one more Trump “lie” to add to the list. Why, all you have to do is google Bloomberg’s height to learn that the ex-NYC mayor and media mogul currently trying to buy the Democratic  nomination for President is a full 5’8″ tall, and also to be informed that 5’8″ is average for an American male!

The tweet was, of course, as infantile as it was Trump-like, redolent of candidate Trump’s mockery of Marco Rubio as “Little Marco.” It was also a lot closer to accurate than Google’s bias-driven mythology. Heck, I knew that Bloomberg was short—anyone who has seen him in a group does—and 5’8″ isn’t short. Edward Welsch, who worked for Bloomberg, writes in Commentary,

As a former Bloomberg News employee, I heard this and shook my head in disbelief. Google is lying. I’ve seen the man in person, and he’s strikingly short. My colleagues and I estimated him at 5’5”. Reviewing morning news reports, I note that Google isn’t the only one that inflates Bloomberg’s height. The Daily Caller and NBC News give him 5’7”, the Washington Free Beacon 5’6”. Apparently Bloomberg himself has said 5’7”,  but then he’s also claimed to be 5’10”, which is taller than I am and contrary to my memory of having to tilt my head downward when I stood near him on one occasion several years ago.

Best guesses, since Bloomberg won’t ‘fess up, are that he’s 5’5″ and maybe a little less. Welsch offers this photo of the candidate with then-French president Nicolas Sarkozy in 2011: 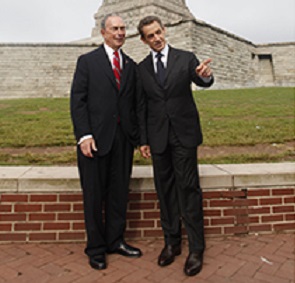 Why does it matter? To begin with, lying abut one’s height is one indication of both an integrity deficit and an insecurity complex. Trump reportedly wears lifts and inflates his height, though he is taller than average, probably 6’1″ For leaders and political candidates, and especially U.S. Presidents, size matters. Many studies have shown that people identify height and size with power and authority; it isn’t just coincidence that the taller candidate almost always wins in Presidential races.

Americans seem to especially identify being taller than average with being Presidential. One reason for this is that the two greatest and most iconic Presidents were unusually tall.  George Washington was 6’2″ in an era where the average male was Mike Bloomberg’s height, about 5’5,” and he was hefty as well.  Lincoln, as everyone knows, was a virtual giant for his time at 6’4″, and his affectation of wearing stovepipe hats exaggerated his size: Abe knew his height was a political advantage. For one thing, it made Stephen Douglas (5’4″) look like an Oompa-Loompa by comparison.

The high end of the Presidential height scale, in addition to The Father of His Country and The Great Emancipator, contains many of our most notable Presidents, like Jackson, Jefferson, LBJ and Ronald Reagan. On the other end, the group is less impressive. In fact, of the 13 shortest Presidents, from least short to shortest at 5’4″, Harry S. Truman, Rutherford B. Hayes William Henry Harrison , James K. Polk , Zachary Taylor, Ulysses S. Grant , John Quincy Adams , John Adams ,William McKinley ,Martin Van Buren ,Benjamin Harrison, and  James Madison, who weighed about a hundred pounds soaking wet, only Truman and Polk, are regarded as outstanding, and only one, President Grant, even served two full terms. You can see why someone who wants to be seen as Presidential material might want to  stretch the truth about his height….especially if he were untrustworthy anyway.

Does it matter that Bloomberg is misrepresenting his height, and that big tech, in the form of Google, and the media are trying to bolster his fakery? Says Welsch, “It matters because it’s another example of both the candidate and the media lying to our faces about a basic, unquestionable fact of reality.”

Exactly. It’s also a stupid lie, because it will eventually become apparent that Bloomberg is no more 5’8″ than actor Alan Ladd, “Shane” himself, whose publicist claimed was 5’8″ when he was more like 5’5″. In the classic 1953 Western, director George Stevens had other actors standing in trenches or Ladd on a box when they were in scenes together, but the illusion is still blown late in the film when the hero has his big scene with leading lady Jean Arthur.  They seem to be about the same height, and Arthur was only 5’3″.

At some point in this week’s debate, Mini-Mike will have to stand next to Joe Biden (6’0) or Amy Klobuchar (5’4″), and we’ll know just how big a mass of dead energy Bloomberg really is.