I have a long-time friend whose spouse has the above Facebook meme as a social media avatar. As a result, I have serious reservations about having any further interaction with either of them.

Once again, I am bedeviled by the phenomenon of public virtue-signaling, a non-virus epidemic that mostly manifests itself among smug progressives. There is no question in my mind that such ostentatious declarations are obnoxious and nausea-inducing, and thus offensive. But are they unethical?

The last time I addressed this issue was when these signs, mercifully short-lived, starting popping up on my neighbors’ lawns. 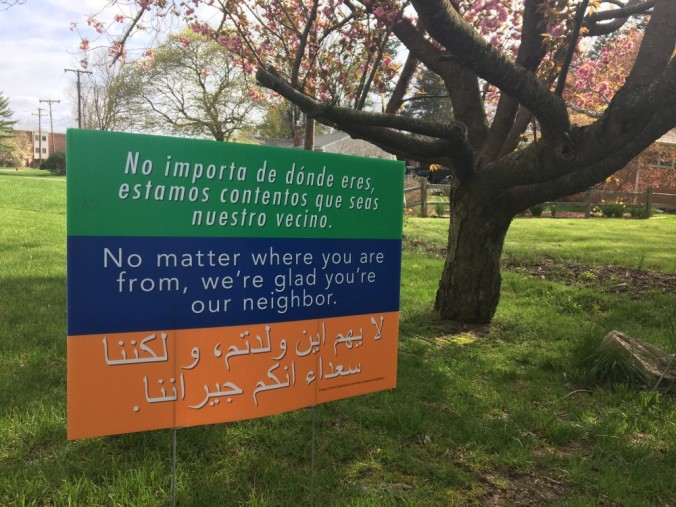 Then, I see that I was adamant, writing in part,

The sign is dishonest, unfair and divisive. It is also political, while pretending not to be.

First, the sign is not what it represents itself as being. It is not written for an actual neighbor. If it were, the sign would be remote and rude. I welcome new neighbors personally, not by putting garish signs on my lawn.  The sign is blatant virtue-signalling, telling the neighborhood that this household is in favor of diversity, love, and immigration…as if lots of other people are not… the sign is a straw man. I’m sure, however, that Hispanic-Americans or Muslim-Americans who see these signs on lawns might be moved to think: Wait, does this mean that many people in this community DON’T welcome us as neighbors? How are we to recognize them?…the sign is really a tacit insult to those who a) think that our immigration laws should be enforced, and b) those who think people who pledge fealty to Islam and Sharia are a little bit more risky to have in the neighborhood than the average Catholic, Jew, Hindu, Buddhist or Presbyterian—which, in fact, they are. Neither of these concerns mean that such citizens object to neighbors based on “where they are from,” but rather according to whether they broke laws to get here and are breaking laws by staying here, and whether they are waiting for their chance to kill us because their cultish religion tells them to. Framing these legitimate and fact-based concern as irrational xenophobia and bigotry is intentionally misleading, and meant to stifle dissent…The message is also irresponsible, slathering back-patting virtue-signalling to obscure legitimate issue that should be considered without emotional static.

No equivocation there, I see! Why then am I hesitant to come to the same verdict regarding the meme, which is arguably even worse? It will be seen by more eyes than the signs. It touches on more coded topics signaling virtuous and uncompromising wokeness and political correctness. It is divisive and intended to be divisive: those of you who don’t support affirmative action, reject white privilege, seek to end income inequality, welcome illegal immigrants, want to empty the prisons and sacrifice your living standards to defeat climate change, it says to me, you are all full of hate, cruelty and selfishness, unlike me, and people like me.

Ack, gag, barf, yecch. A verdict of ick is justified beyond a reasonable doubt (for more Ick Factor discourse, go here), but unlike the signs, the “love” meme does not directly impugn anyone to the  degree that those signs did by casting suspicion on homes not displaying them.  I am also beginning to think that the meme might even be  ethical in its transparency.

Anyone who voluntarily broadcasts a message like that is telling the world that he or she is an arrogant and intolerant jerk (and probably a hypocrite, since such lovers have been routinely spewing hate for the elected President and about half the American public for the last three years). It’s good to know, when you think about it.

25 thoughts on “Ick Or Ethics? The Nauseating Social Media Meme”