Let’s start with the name, shall we? Until further notice, Ethics Alarms will call this thing the Wuhan virus, in part out of sheer orneriness, but also because… 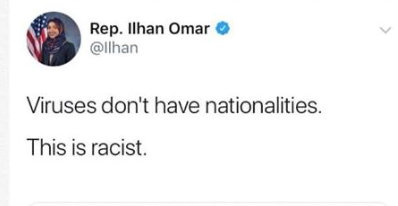 Omar’s logic here is so self-evidently contrived that if someone can’t immediately explain why, I’m not going to waste my time explaining it to them.

…but mostly because the virus still appears to have largely emanated from the Wuhan Province in China, and I’ll be damned if the hypocritical race-baiting efforts by the news media and political correctness addicts are going to dictate how I communicate.

[W]hat are we to say of those currently parroting the CCP line that calling the coronavirus by its proper name—whether “Chinese coronavirus,” “Wuhan virus,” or perhaps the most apt “Chinese Communist Party coronavirus”—including its place of origin, is racist? Would it be too gentle to say these individuals are acting like unregistered foreign agents for Beijing? This is not hyperbole because Chinese propaganda has simultaneously aimed not only to delink the coronavirus from China by calling those raising the basic fact racist, but to deflect and even shift the blame to America as part of some kind of absurd conspiracy. No American should give the CCP the satisfaction of spinning blatant propaganda when the CCP is responsible for wreaking this havoc on the world.

Maybe that’s a bit too harsh.

As we shall see, the news media and social media are far more interested in somehow using the health crisis to destroy President Trump than they are in being responsible, conveying accurate facts and perhaps even helping the nation get through all of this as well as possible.  The name game quickly became part of the arsenal.

“We are starting to see a message shift here,” CNN’s Chris Cuomo said on two days ago. “Because you are starting to hear the Republicans, especially Trump Co., calling it the Wuhan or the Chinese Coronavirus, they’re looking for someone to blame.” Granted, he’s a moron, but the Non-Trump Deranged media was quick to go to the videotape and prove that the news media, including CNN, had used the “racist” term for quite some time, until someone concocted the race-baiting idea. Fortunately we have screen shots, and curmudgeons who have searched through the web archives to capture the hypocrisy, such as The Times in January, before its pundits started calling the name racist;

and this side to side smoking gun, also from the Times..

While other media sources leap to Big Lie #4: “Trump Is A Racist/White Supremacist”:

This is among the least sinister of the Democratic Party/”resistance”/mainstream media (The Axis of Unethical Conduct, aka the AUC) ploys to weaponize what should be an entirely apolitical and unifying national event.  It is also illustrative, however, and more evidence of how untrustworthy the U.S. institution is that a democracy should be able to depend upon at times like these, but obviously cannot.

18 thoughts on “Pandemic Ethics Observations, Part I: The Name Game”