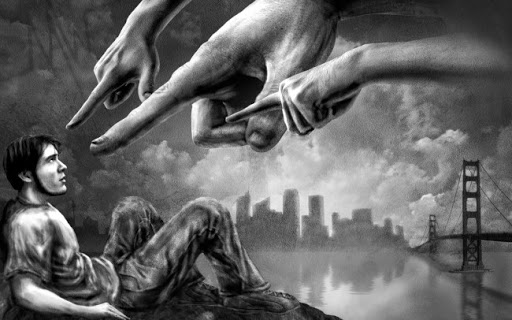 Reader JP, who is a minister, had a fascinating reaction to the post about the Australian cartoonist in the process of being “canceled” because he had the audacity to mock mothers who pay more attention to their cell phones than their infants. Australians, especially mothers and feminists, are furious…because he criticized conduct that nobody denies occurs.

Here is his Comment of the Day on the post, “From Australia, A Cancel Culture Chapter That I Don’t Understand At All”:

“Is guilt driving the attacks on Michael Leunig? Is that it? They are punishing a truth-teller for using satire and humor to hold a mirror up to their faces like satirists and social commentators are supposed to do? If that cartoon sparks such anger, what would these people have done to Swift, Voltaire, Gilbert, Shaw, Parker, Wodehouse, Vidal, or even Dave Barry?”

A few years ago,  I was teaching this class on 1 Corinthians. It had been going on for about a month at this point where we got to the section on marriage, divorce, and adultery. Most of the class focused on the marriage part. Very little was said about divorce and adultery. I didn’t focus on it too much. In a class like this, I tend to let discussion stay with the interests of the class. I did address divorce and adultery as real problems of the church and  said they should not be ignored.

After class, a women came up to me and let me have it.  According to her, divorce and adultery were “none of the church’s business.” She was pretty passionate about it, so I let it go. She wasn’t at the next class  I assumed she was making a point because she thought that I would never agree with her.

A month later, her husband dragged her into my office, saying she been committing adultery. He wanted to know what he should do about it. She wouldn’t look a me. I suggested a professional counselor, and that was the last time I saw either of them.

Last year, a older couple came to our church for the first time. I made a home visit like I normally do, and they acted surprised. They told me no one ever visited them from their last church. They came to services for about three weeks, and then stopped. When I I followed up , they said our church wasn’t “the right fit.”  A few months later, I got a call from another minister wanting to know why we never visited them. I told him what happened and suggested they were church hopping for attention. He said they didn’t seem like that. There must be something wrong on our end. Last I heard, that couple was at another church.

I find that the same truths underlie both of these stories.

First, people are going to do what they want to do—maybe not everyone, but a large majority. And why not? We have so many cultural (pressures?) movements that say follow your heart, it’s ok, it’s your choice, it’s your body. You only live once. Just do it. Do what feels right/good and damned the consequences. Don’t allow your bad choices to make you a victim. If a spouse wants more in a relationship and and goes outside a marriage to find it, just go for it. If you want attention? Seek it. Nothing is going to stop you but your own pride and guilt.

That brings me to the second truth.

People don’t want to feel bad about the choices they make. That’s why they go out of their way to rationalize them. The woman who told me adultery was none of the church’s business and the  minister who wanted to blame me for the older couple’s dissatisfaction did not to accept realities that implicated them.  I was a convenient scapegoat.

According to Jonathan Haidt there are four main emotions that drive people: Empathy, sympathy, pride, and guilt, Guilt and pride stand out more than the other two because they are both negative and inward, motivated by a lack of self.  This makes them more detrimental than the other two. I speculate that this is the reason social media mobs attack people who speak the truth. They use empathy and sympathy to support the “victims” giving the appearance of a righteous cause while really just feeding their own guilt and pride. After all, if it is truly acceptable that those people do it, it must be okay if I do it too, or something similarly wrong.

This brings me to my third observation.

You cannot easily erase your guilt. To some extent, everyone has apophenia: seeing patterns where their are none. It is why we see shapes in clouds, and why we are so quick to jump on conspiracy theories. I’ll admit I have been guilty of this too. In high school, I believed the crashing of the Twin Towers on 9/11 was a sign of the End of Times. When I talked to the minister about that older couple and opined that they were seeking attention, he told me I was seeing things that didn’t really exist in their  church-hopping.  A conversation with my senior minister revealed that the woman who had objected to my comments on adultery had had a similar outburst with him. Although no one was aware of her adultery, he guessed that her guilt was fueling her paranoia. She believed we all knew and were directly criticizing her. What do we do to erase our guilt? We double down on our efforts to shift it, get rid of it, pretend that there’s nothing to be guilty about.

After reading many of the stories on this blog, I think there is a fourth lesson. It is perhaps the saddest of them all, because it just continues the cycle.

If you think enough people are on your side, you can ride out the storm of your own guilt. Then no hard lessons have to be learned. The minister never apologized to me and last I heard the woman got married to her partner in adultery. Sure, there might be some “pain” for a while, but it will go away…at least until the next time. Sure, we are all a little worse off as a community and a society, but at least you got what you needed or wanted. Bravo!

There is a solution that often ends this cycle: Treat others how you want to be treated. Give people the benefit of the doubt, and when necessary consider the needs of others above your own.

17 thoughts on “Comment Of The Day: “From Australia, A Cancel Culture Chapter That I Don’t Understand At All””