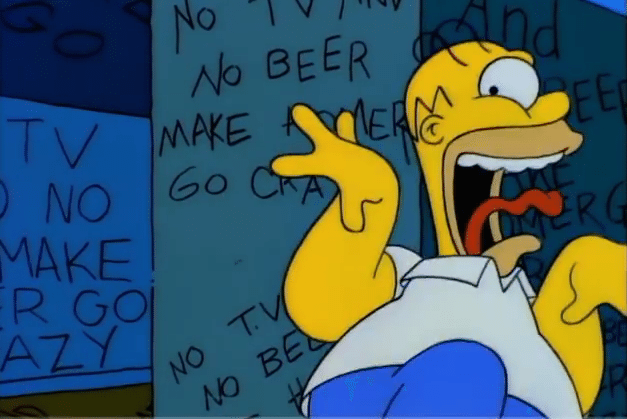 Yes, I’ve been thinking about this episode (“The Shinning”) of “The Simpsons” a lot lately…

Of course, in my case, I’m writing on the walls, “No baseball, no seminars make Jack Go Crazy!”

1. And speaking of people going crazy: the various anti-gun mayors and governors who are arguing that gun stores are “non-essential” are displaying their irrational Second Amendment phobia, much like Ohio and Texas attempting to prohibit abortions as “non-essential” surgery. The ability to self-arm is more essential at times of social disruption than usual. Looting and attacks on homes are just around the corner as resources dwindle and people become desperate, and we already have plenty of evidence that irresponsible, anti-social and unstable members of the public are not as rare as we might wish. The comparisons of the Wuhan virus crisis to zombie scenarios (as in “World War Z”) are invitations to hysteria, but in one respect the analogy is apt. Guns are useful tools to have around in both situations.

The Justice Department has started to probe a series of stock transactions made by lawmakers ahead of the sharp market downturn stemming from the spread of coronavirus, according to two people familiar with the matter. The inquiry, which is still in its early stages and being done in coordination with the Securities and Exchange Commission, has so far included outreach from the FBI to at least one lawmaker, Sen. Richard Burr, seeking information about the trades, according to one of the sources. Public scrutiny of the lawmakers’ market activity has centered on whether members of Congress sought to profit from the information they obtained in non-public briefings about the virus epidemic.

And if this causes the Republicans to lose control of the Senate, they deserve it. Burr, in particular, should resign now. He should not be allowed to run for re-election.

3. I would think that this is a slippery slope we don’t want to get on…

See, if Florida officials had been this creative and poured sludge on the beaches, it would have had all those Spring Breakers to worry about. If there’s an attraction that promotes irresponsible conduct, just ruin the qualities that made it attractive! It’s like throwing acid in the face of your spouse’s comely mistress.

4. But not fish tank cleaner: Last night, the Food and Drug Administration issued authorization for emergency use of hydroxychloroquine and chloroquine, drugs often used to treat malaria, in treatment of cases of infection by the Whan virus.

The FDA will allow the drugs to be “donated to the Strategic National Stockpile to be distributed and prescribed by doctors to hospitalized teen and adult patients with COVID-19, as appropriate, when a clinical trial is not available or feasible,” according to Politico.

Thus the President’s touting of hydroxychloroquine as a promising treatment was not fanciful or irresponsible, but accurate. Apologies will not be forthcoming from the many mainstream media sources that claimed that he had misled two idiots into drinking their fish tank cleaning solution.

5. Kennedy Center ethics. One of the non-pandemic-related provisions that Nancy Pelois was willing to insist upon even as delayed desperately-needed emergency funds going out to individuals and small businesses was a taxpayer bail-out of the super-elite
The John F. Kennedy Center for the Performing Arts, which provides entertainment almost exclusively for the richest citizens in the Washington D.C. area. The Center should have received nothing: in D.C., as well as all over the country, small theaters like the one I used to run are facing ruin because of the virus, and they provide live theater that normal families can afford. Nevertheless, this was not a hill to die on for conservatives, so the monument to the Kennedy family received $25 million in taxpayer money to “cover operating expenses required to ensure the continuity of the John F. Kennedy Center for the Performing Arts and its affiliates, including for employee compensation and benefits, grants, contracts, payments for rent or utilities, fees for artists or performers,” according to the law’s provisions.

Hours after President Trump signed the bill, the Center informed members of its house orchestra, the National Symphony Orchestra, that they would be laid off. Nearly 100 musicians will no longer receive paychecks after April 3.

It is true that professional musicians, thank to a ruthless union, are shockingly expensive.  Nonetheless, that 25 million was a windfall, and the musicians on the NSA are among the most prominent of Kennedy Center Employees. Contrary to popular belief, however, arts organizations and those who run them are not compassionate people, or ethical in most cases. In a panel discussion, I once described the ethical culture of show business as being most similar to that of Columbian drug dealers.

I was not exaggerating.

6. Yeah, I know. Pelosi. I wasn’t going to mention Nancy Pelosi’s disgusting claim that President Trump is responsible for deaths from the Wuhan virus, but I suppose it’s so offensive that I have to.  Once the Speaker committed to an unconstitutional impeachment and tore up the State of the Union to show her contempt for the President, we already knew there were no depths to which she would not sink. Like so much else the Democrats have done and said, this viciousness is designed solely for the extreme audience of veteran Trump-Haters who would believe it if they were told that the President was a disguised Lizard Man from a distant planet.

Conservative pundit Rick Moran writes the obvious, or at least it should be:

The charge is incendiary, of course, but more than that it’s politically stupid. Very few voters — even many Trump opponents — are  going to blame him for killing people….The Democrats are getting truly desperate. Trump’s handling of the crisis is meeting with increasing approval from the public, despite Democrat’s efforts to derail him. They have to find a way to bring the president’s approval down. But if they think accusing Trump of murder is the way to do it, they are sadly mistaken.

“That’s the most shameful, disgusting statement by any politician in modern history,” he said on Fox Futures. “This is the same Speaker of the House who held up the bill in the Senate for days because she wanted same-day voting. She wanted carbon neutrality for the airlines. She is the one that held up the package in the Senate for days. … So it’s the most shameful, disgusting thing I have heard yet, and it needs to stop.”

Oh, it won’t stop. It will get worse as Democrats become more desperate. Meanwhile, I’m trying to think of a more shameful, disgusting statement by any politician. So far, the only candidate I can come up with is…Donald Trump.