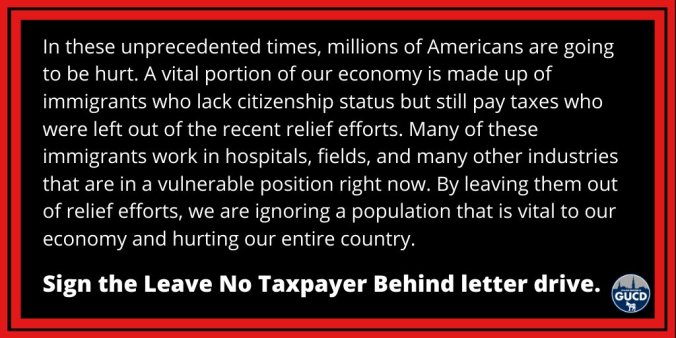 Pop quiz: List the ways the above is dishonest and deceitful.

There are some progressive agenda items that are either dishonest or so dumb they defy belief. Open borders is in that category; ignoring immigration laws by letting anyone who slips through our porous security to stay here as long as they don’t kill or rape someone is there too; so is giving these individuals drivers licenses, and rewarding their children for the parents’ lawbreaking. All the arguments for these intellectually indefensible positions are either extreme rationalizations, based on emotion over reality+ or cynical deceptions used to disguise the real objectives.

Yet however unethical the arguments for letting illegal immigrants enter our country and stay here, the position that we should give them financial aid during the pandemic crisis and resulting economic shut-down is worse.

Of course California likes the idea; there are few terrible policy idea that the Golden State doesn’t like.

Last week Governor Gavin Newsom announced he is working on a plan with the state legislature to provide economic relief for illegal immigrants in California. “Californians care deeply about undocumented residents in this state,” Newsom said.

Ooooh, they care! Let’s see if they care when the money going to people who have no justification for being here comes out of citizens’ pockets. Is “undocumented” the deceptive euphemism of choice in California? Interesting. “Migrant” is sneakier, and of course there is the media’s favorite Orwellian “immigrants” to mean “illegal immigrants.”

Yes, it’s true: I am no longer interested in being nice or diplomatic about this destructive idea and the liars, knaves and fools who support it.

“I was appalled to learn hardworking, taxpaying immigrants were left out of the $2 trillion CARES Act,” California Rep. Lou Correa  on April 3.  CARES is the $2.2 trillion stimulus fund  available to sustain families and U.S. businesses while the nation is in a health crisis lockdown. Ah! Correa likes the “immigrant” deceit! Wise choice.

Correa is joined by 49 other House Democrats in support of the Leave No Taxpayer Behind Act which would allow illegal aliens to receive some of the funds provided by the CARES Act. Taxpayer! That’s a new cover-word for “illegal immigrant”! The idea with all of these rhetorical devices is to make the gullible and the dim forget that we are talking about people who have no right to be here, and who are collectively doing massive harm.

More double talk and deceit: “By casting out immigrants, we are placing some of our most vulnerable residents in grave danger. Every individual taxpayer, irrespective of citizenship status, needs government assistance now,” Correa continued.

1. Not immigrants. Illegal immigrants. 2. They are vulnerable residents here only because they snuck over the border when they should not have. They should be vulnerable residents of their own countries, and the U.S. should treat them as such. 3. These “residents” are in grave danger here because they put themselves in that position. “We” haven’t placed them anywhere.

Among the sponsors of the Leave No Taxpayer Behind Act are, of course, the”Squad,” Reps. Ilhan Omar of Minnesota, Alexandria Ocasio-Cortez of New York, and Rashida Tlaib of Michigan, socialists and anti-Americans all.

Meanwhile, over in that toddlin’ town, Chicago Mayor Lori Lightfoot signed an executive order  that made all immigrants and refugees living within city limits, no matter their legal status, are eligible to receive virus shutdown benefits. Minneapolis has approved similar benefits, specifying that being in the country unlawfully is not an obstacle to receiving the funds. Why, they will not be able to explain honestly. No one can. Here, for example, is what passed for a rationale from Mayor Lightfoot: “It is a statement of our values as a city and as Americans.”

Wait…what values are those? The value that laws don’t matter? The value that if you want to or need to enough, breaking the law should have no consequences? The value that the country you abused has an obligation to pay you for breaking its laws?  I don’t get it: please explain.

If this is all about “caring,” then shouldn’t we be caring more for the Mexicans and South Americans suffering in their own countries who haven’t broken our laws? They have proven that they respect our nation and its laws far more than those who have  defied our government to arrive and stay here….what kind of “values” dictate that those who cheat and push ahead in the metaphorical line should benefit, while those who obey laws and rules should be ignored?

25 thoughts on “Giving Shutdown Aid To Illegal Aliens Is Unethical, And There Are No Valid Arguments That It isn’t”