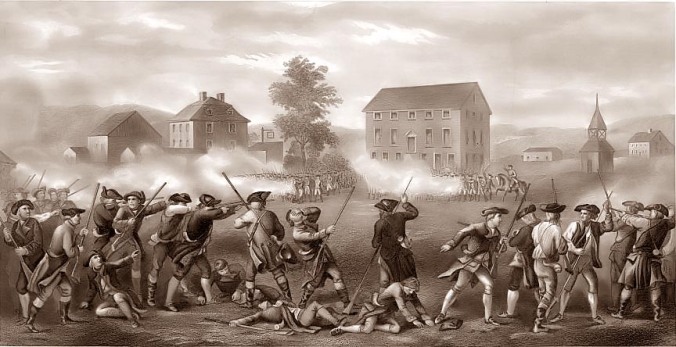 “One if by land, and two if by sea
And I on the opposite shore will be
Ready to ride and spread the alarm
To every Middlesex village and farm
For the country folk to be up and to arm!”

Today, the third Monday in April,  is supposed to be Patriots Day in Massachusetts (and  few other states.) It absolutely should be a national holiday, as it celebrates the battles of Concord and Lexington as well as the rides of Paul Revere and his fellow messengers the night before. I typed the excerpt above from Longfellow’s “Paul Revere’s Ride” from memory; I wonder how many students today  have even heard of the poem, or Concord and Lexington, for that matter.

The original holiday was on April 19, the date of both battles, but Arlington, Massachusetts, where I hail from, was actually the site of a bigger battle than either on the same day. On their way back from Concord after being soundly beaten at the bridge, the Redcoats marched through the town of Menotomy (Arlington now), where 5,100 militia men from surrounding towns had gathered after, unfortunately, the British had marched through the Menotomy on the way to Lexington Green with little resistance.  The volunteers, stationed around houses, stone walls, fields and barns, did considerable damage to the already limping British in the fighting that followed, but Arlington residents have always been a bit sheepish about the timing of the fight, and historians regard it as  anti-climactic following the tragedy at Lexington and the surprise victory at Concord.

Patriots Day is a big  deal in Boston, where the Boston Marathon is run annually on that date. The Red Sox also play a unique 11 am game, so spectators can leave the park and watch the finish of the race. All gone this year, of course.

That doesn’t mean that we shouldn’t remember, and honor, the heroes, victims and events of 1775 that made the United States of America possible.

1. This is the kind of thing that will lead to serious back-lash against the pandemic dictators. The city of San Clemente was alarmed that some teens, bored with pplaying video games all day, every day, continued to skateboard in a local skate park despite orders that all parks be closed. Its solution?  Fill the park, at taxpayer expense, with 37 tons of sand. The money to build the park was raised by a nonprofit coalition of local families who wanted a place for their kids to be able to skate safely, and they were not even notified that the park would be filled with sand, according to KCAL-TV.

I wonder what the actual risk of infection is for skateboarders who pass each other?

Time for this clip again:

2. “Bias makes you stupid,” Ann Althouse edition. Retired professor Althouse quotes the Harvard Magazine piece about home schooling that I touched on here. She quotes from the anti-homeschooling article from a Harvard prof, noting that Professor Bartholet “recommends a presumptive ban” on homeschooling:

“We have an essentially unregulated regime in the area of homeschooling,… That means, effectively, that people can homeschool who’ve never gone to school themselves, who don’t read or write themselves.”

Althouse continues: Bartholet notes that some of these parents are “extreme religious ideologues” who question science and promote female subservience and white supremacy. Children should “grow up exposed to…democratic values, ideas about nondiscrimination and tolerance of other people’s viewpoints.”… Bartholet’s idea of a “presumptive ban” would put the burden on the parents to meet some sort of standard that would be set by legislation. Do those who are insulting Bartholet support letting parents keep their children out of school on a mere claim that they are educating their children at home?”

Other than a good faith showing that the parents have the time and intention to make sure the child learns basic skills and have access to sufficient resources, with periodic checks to ensure that the parents are meeting that commitment?

As for what the parents teach, that’s none of the state’s business beyond the most minimal standards, especially after it has proven that its own efforts have been disastrously incompetent.

3.  The Times is getting worse, as hard to believe as that is. Here are the three headlines above the fold in the Sunday New York Times:

Ethics verdict: Fake news, Future News division. Genuine news is what has happened, not what might happen. Such predictions are so filled with bias and lack of accountability as to be worthless.

Ethics Verdict: Fake news. Emotions are not news, nor are presumptions about anything makes anyone else “feel.” The news is that there is  a shortage of dialysis units. That would be a mid-A section headline, perhaps. Using the emotions header is scaremongering.

But here is the really unethical headline, to a story contributed to by Maggie Haberman, the Times’ assigned Trump assassin:

That is a pure partisan headline, based on biased assumptions and slanted analysis. The Democratic/ “resistance”/mainstream media slur that the President is responsible for the spread of China’s virus is the “hoax” that Trump said it was, and this story is a classic example. There is no evidence in the article that the Republicans are trying to make China a “scapegoat,” with the very use of that word conveying the false narrative that China isn’t fully responsible for the pandemic. If you are blamed for what you did, you’re no scapegoat. What the GOP and the President are doing, and have to do, is to counter the propaganda, being unethically pushed by the Times and others, that the President should be blamed. The article is opinion presented as news. At very least, I expected an unattributed statement from some supposed Republican insider that the party had a meeting and decided to “scapegoat” China. Nope. This is all a theory by Times reporters.