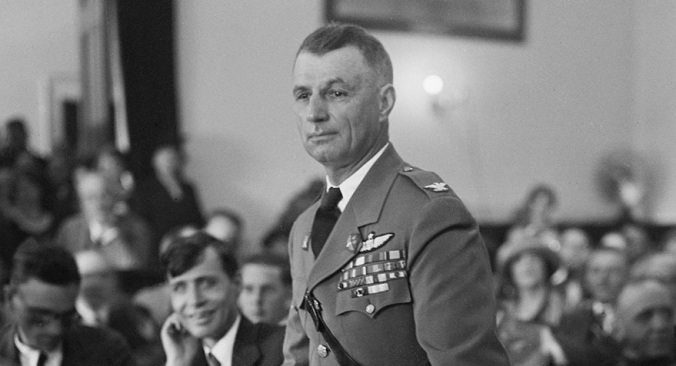 Billy Mitchell, at the court martial he wanted…

Why I didn’t think to include the tale of General Billy Mitchell in the Ethics Alarms posts regarding Captain Brett Crozier, the former commander of the aircraft carrier Theodore Roosevelt who forfeited his job by going around the chain of command to protect his crew, I really don’t know. But it’s normal for people to forget about Mitchell, and I don’t understand that, either. He, like Crozier, was an unconventional Ethics Hero, and a crucial one. And he may well have saved the world.

Do you not know the story of William Lendrum Mitchell, born December 29, 1879, died February 19, 1936? You should. Every American should.

He grew up in Milwaukee., Wisconsin. At age 18 he enlisted as a private in the army, and by the age of 23 he had become  the youngest captain in the U.S. Army. It was a pattern; being a prodigy and trailblazer in the military came naturally to Mitchell. In 1913, at the age of 32, he became the youngest officer ever assigned to the General Staff of the War Department in Washington. At a time when most in the military considered the airplane a novelty, “a risky contraption” of little or no value in combat,  Mitchell immediately saw the potential of air power, and believed that planes represented the future of warfare.

The United States had only fifty-four air-worthy planes  when it entered World War I in 1917, and only thirty-five air-worthy officers, including Mitchell, to lead them. Again he was a first, this time the first  American officer to fly over enemy lines. He organized the first all-American Air Squadron; one of his recruits, Eddie V. Rickenbacker, became a legend as  Mitchell moved his American air units to counter Manfried von Richthofen, the “Red-Baron.” When Germans planned to unleash a major ground offensive and the Allied commanders were desperate to learn where  it was being mounted, Mitchell volunteered to fly low over the enemy’s lines, and his daring mission discovered thousands of Germans concentrating close to the Marne River. Armed with Mitchell’s intelligence, the Allies launched a surprise attack on the German flank and scored a major victory. Mitchell’s solo reconnaissance flight was hailed as one of the most important aerial exploits of the war.

Mitchell continued to employ air power to bolster the American war effort, with marked success. After the war, now a brigadier general, he began arguing passionately and often undiplomatically for the United States to modernize its rotting fleet of combat planes and to create a separate branch of the armed services. Although Mitchell organized a  demonstration to prove what properly flown and armed planes could do, sinking a submarine, a destroyer, a cruiser, and finally the captured German  battleship Ostfriesland, which many naval experts considered unsinkable, he couldn’t get the bureaucracy, including an apathetic President Harding, to budge. The Army and Navy brass continued to insist that Mitchell’s vision of what an air force  could do was fantasy, the equivalent of science fiction.

By June 1924, Mitchell’s underfunded Air Service had deteriorated to only 750 occasionally airworthy planes. Believing that the neglect of what he considered a crucial weapon would handicap the U.S. in any future war,  Mitchell told the press bitterly,  “There are those in Washington who should be severely taken to task and court-martialed for their deliberate neglect of aviation. Today we haven’t a single airplane in service capable of engaging in war with a first class enemy.” For that he was demoted to colonel. When the dirigible Shenandoah crashed in bad weather, killing 14 airmen, Mitchell decided to play the most dangerous game for a military officer. In a series of letters and interviews with the press,  he laid out the future of air warfare as he foresaw it, advocating the development of paratrooper capability (at that time, his pilots didn’t even have parachutes) and the building of aircraft carriers. He predicted an eventual attack on the Hawaiian Islands, including Pearl Harbor; he insisted that air power would be the key to controlling the Pacific. Knowing that he was engaging in insubordination, he accused his superiors of “incompetence, criminal negligence, and almost treasonable administration of the national defense”.

Mitchell had decided to force his court martial as the only way to dramatize the importance of his ideas and shock the bureaucracy out of its dangerous inertia. It was the equivalent of civil disobedience, but military style. As he predicted, President Coolidge ordered that Mitchell be court-martialed, and as he intended, the trial gave Mitchell and other air power advocates a public forum to warn the nation, explain his vision and condemn those keeping the United States from taking full advantage of the potential of a modern, capable air force. Among the witnesses backing Mitchell at his trail was Eddie Rickenbacker, and then-Congressman Fiorello La Guardia.  Nobody on the he court-martial tribunal had ever flown a plane, and it found him guilty. (The only member of the tribunal to vote for acquittal was General Douglas MacArthur, who would have his own insubordination crisis in the war to come.) Mitchell received what the tribunal called a lenient sentence in consideration of his war record: suspension of rank, pay, and command for five years. Instead of submitting to the punishment, Billy Mitchell resigned.

Mitchell’s prognostications and warnings, however, had an almost immediate effect, especially after one by one his predictions came to pass.  He had said, “German militarism endangers the world”. He had predicted, “The British Isles will some day be vulnerable to mass aerial attack.” He had asserted, “Airborne armies can be dropped behind enemy lines with devastating effect.” He warned, “Japan may unleash a war in the Pacific. She could attack America by striking first at Hawaii, some fine Sunday morning.”

Five years after leaving the army, he said, “In their lifetime my children will see aviation become the greatest means of national defense and transportation all over the world and possibly beyond the world into interstellar space”.

Mitchell was a catalyst for rapid change. By 1932, President Roosevelt invited him to the White House for a briefing  on Mitchell’s concepts for a unification of the military in a Department of Defense. He died in 1936, and by then many of his most important recommendations were being implemented. He was posthumously promoted back to general, and received many civilian and military honors. Billy Mitchell is now known as the Father of the United States Air Force. In a movie about his trial, Mitchell was played by Gary Cooper.

Mitchell proved for all time that an officer could earn serious military punishment and still be right in his actions,  benefiting the Armed Services even while defying them. My father, who defied his command a few times himself in his military career, taught me about Bill Mitchell when I was about 12, though the lesson confused me at the time. Dad said that Mitchell was a hero, that he behaved the way soldiers should be prepared to behave when necessary, and that he deserved to be court-martialed.

Now it is looking as if Captain Crozier, who deliberately breached the chain of command, knowing it would end his military career, to protect his crew and demonstrate that Navy protocol was not appropriate during the outbreak, might be reinstated.

The ghost of Billy Mitchell is smiling.

22 thoughts on “Captain Crozier And The Ghost Of Billy Mitchell”