(I’d have the West Side Story song up, but for some reason WordPress hasn’t been letting me embed videos lately.) Do you feel it? I sure do…

1. Our incompetent leaders, Part 645, 991. The proper anti-virus conduct as modeled by Nancy Pelosi on TV last week: take off your mask, wipe your nose with your hand, 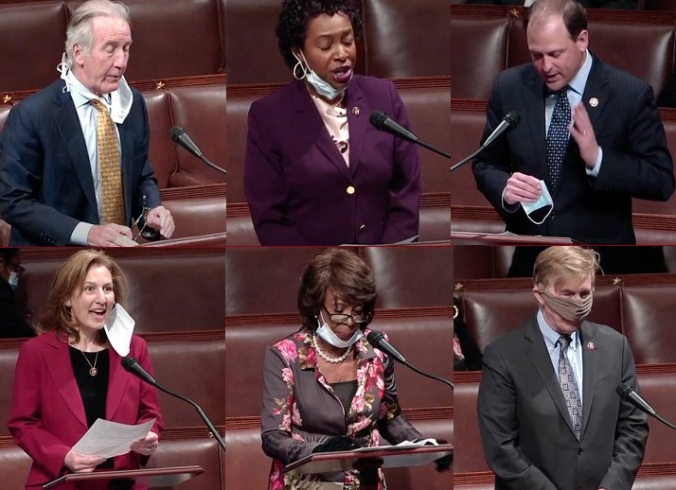 [Pointer: Steve Witherspoon (not Other Bill, as I erroneously stated originally. Sorry, Steve)]

…and this (from the Babylon Bee):

3. You know, I really don’t care what someone like this thinks about illegal immigration. In a review of a pro-illegal immigration book by illegal immigrant (OK, she’s a “Dreamer”) Karla Cornejo Villavicencio, we learn that, among other things, she’s mentally ill, and is a Ph.D candidate at Yale. Her book is also titled “The Undocumented Americans,” which is double dishonesty: “undocumented” is a cover word designed to deceive, and illegal immigrants are not “Americans.”

Quick diversion: Education Secretary Betsy DeVos announced that “Dreamers”—people brought to the U.S. illegally as children—cannot access emergency funding set aside for college students who are enduring disruptions in their education because of the pandemic, because grants may only be given to students who are eligible for federal aid under Title IV of the Higher Education Act,  meaning U.S. citizens. Naturally, she is being attacked as cruel and racist.

It is the correct, responsible, legal and ethical decision.

So she is laboring under emotional difficulties, a law-breaker herself, and a liar. That’s some expert you got there. She’s also not very bright, based on this statement from her book:

“Many of us are indigenous in part or whole and do not believe borders should existI personally subscribe to Dr. King’s definition of an unjust law as being ‘out of harmony with the moral law.’ And the higher moral law here is that people have a human right to move, to change location, if they experience hunger, poverty, violence, or lack of opportunity, especially if that climate in their home countries is created by the United States, as is the case with most third world countries from which people migrate. Ain’t that ’bout a bitch.”

I would think that indigenous people more than anyone should have learned the critical need for borders and border enforcement. That idealistic open-borders concept really worked out swell for them didn’t it?

That obvious observation aside, Cornejo Villavicencio’s assertion is self-evidently absurd. Her concept of “moral” immigration would render nations ungovernable and society bankrupt. As has been stated here many times, “ethical” formulas that are unfeasible and impractical because of the realities of human nature are not ethical at all. Dr. King’s definition of an unjust law was and is, as I’m sure he knew, subject to so much individual interpretation as to make the rule of a law impossible as well.

There is no universal “moral law” that everyone accepts: Dr, King was being more than a little bit disingenuous. That “moral law” argument was used by Mike Huckabee and others to argue that the Supreme Court’s validation of same sex marriage created an “unjust law.”

4. The Ethics Alarms Double Standards Hall of Fame: Minnesota’s St. Olaf College has postponed graduation until 2021, but will host three virtual graduation ceremonies for  groups of minority students according to its website.

“Self-identified domestic students of color, international students and LGBTQIA+ students” will be able to participate in their own, special virtual graduation ceremonies at the conclusion of this year. They are being called the multicultural, international, and lavender <ACK! GAG! RETCH!>…I’m sorry, that last is so precious that I nearly lost it there.

“This event acknowledges the value and uniqueness of students’ experience and serves to commemorate and highlight the accomplishments of individuals within their familial and cultural context,” the school explained.

If the students don’t have the integrity and guts to shut this insulting and discriminatory plan down, I would recommend that nobody hire any graduates from St. Olaf’s. And yes, I also see the obvious loophole here: if the multicultural, international, and lavender graduations are for students who have “self-identified” as member of those groups, why can’t all students just pick one?

5. Ethics Quote: Ricky Gervais.…”I think that’s the mistake people make: They think that every joke is a window to the comedian’s soul — because I wrote it and performed it under my own name, that that’s really me. And that’s just not true. I’ll flip a joke halfway through and change my stance to make the joke better. I’ll pretend to be right wing, left wing, whatever wing, no wing.”

Indeed, that’s the most ethical way for comedians to go about their craft; so is playing to the audience you’re in front of. Nor should a comic be regarded as a hypocrite because he or she mocks a position, party of candidate they personally support.