The Wisconsin Ethics Commission is a supposedly essential and honorable government agency whose mission is “ to promote and strengthen the faith and confidence of the people of Wisconsin in their government, support the operation of open and responsible government, preserve the integrity of the governmental decision-making process, and protect the rights of individuals through the administration of Wisconsin’s campaign finance, lobbying, and ethics laws, and through readily available and understandable disclosure of information.​”

Democrat Scot Ross was named to Wisconsin’s state Ethics Commission last week.  What are his qualifications? Well, he’s a career partisan journalist and bare-knuckles political activist, neither of which are occupations that tend to build strong ethics alarms, or, as they are currently conceived, have any use for them. They do have a tendency to vomit out people like Ross.

This week,  the new ethics commission member retweeted a photoshopped image —Do I really have to show it to you? I guess I do— 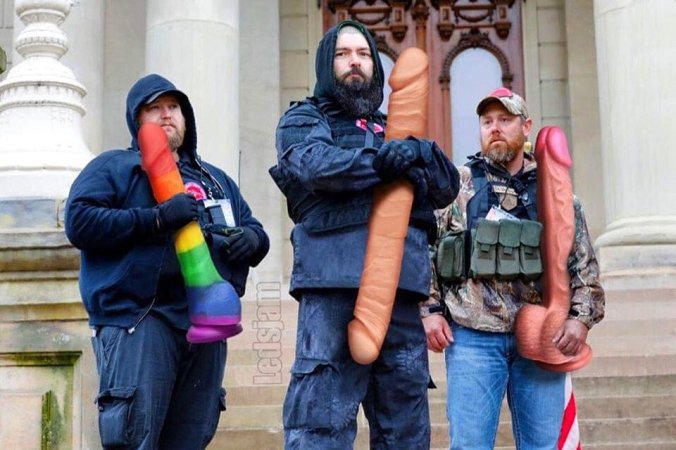 Ross then defended his communications as consistent with his role on the ethics commission. “I don’t think free speech belittles any democratic institution,” said Ross, who once ran unsuccessfully as a Democrat for Wisconsin Secretary of State. He went on to argue regarding the protestors,  “Their behavior is obscene and worth mocking,” adding, “I don’t like bullying.”

I would, given an opportunity, point out to Ross that this is a rationalization, specifically #2 A, Sicilian Ethics, or “They had it coming“:

…This argues that wrongdoing toward a party isn’t really wrong when the aggrieved party has aggrieved the avenger. The victim of the unethical conduct no longer deserves ethical treatment because of the victim’s own misconduct. But the misconduct of a victim never justifies unethical conduct directed against that victim.

That, however, would be a waste of my time, since it is obvious that Ross, like most truly ethics-blind people, thinks rationalizations are ethics. For example, when he was asked if it was appropriate for a state ethics official to be retweeting  photoshopped images that turned the guns the protesters were holding (legally) into giant sex toys,  he answered, “I thought it was funny.”

“…There are also people and organizations who make jokes in public at their peril. Professionals. Elected officials. Scholars. People who expect to be taken seriously and trusted….’It was a joke’ is not a justification in every case, never when it really wasn’t a joke, and often even when humor was the intent.”

Or to put it another way, a member of a public ethics commission can’t uphold the standards of that commission or be trusted to do so if he uses obscene imagery against those he disagrees with. When outgoing Senate Minority Leader Jennifer Shilling appointed Ross, she said he was someone who “championed efforts to preserve Wisconsin’s proud tradition of clean, open and transparent government, high ethical standards and protect voting rights for every Wisconsin resident.”

She  must have been thinking ofa different Scot Ross. This one has, and had, a reputation for such excesses as the dildo tweet. He also tweeted that Senator Ron Johnson  “is the literally biggest piece of shit in Wisconsin.” He called Assembly Speaker Robin Vos, a Republican of course, “the Wisconsin Grand Wizard of the Flu Klux Klan.” He labeled the Republican Party “a white supremacy dung heap of racists.” He referred to  President Trump as “Dr. Shitler.” The Wisconsin State Journal considered that background when it opined  that Shilling  “soil[ed] her Senate exit with bad pick for ethics panel.” That seems fair.

Writing of the latest from Ross, The Milwaukee Journal-Sentinel’s  Daniel Bice  wrote yesterday that Ross’ selection “has been a controversial one, especially for those on the right.” Wrong. That kind of partisan-obsessed reaction is why people like Ross can continue to behave like this. A member of an ethics commission behaving uncivilly isn’t “controversial” at all. It’s a breach of duty. It is the act of an ethics corrupter. It doesn’t merely hurt his targets, like the protesters; it hurts his patron (Shilling), his party, his state, the public, and society, which it coarsens and divides.

Ross, as someone who wouldn’t know an ethical value from a whoopee cushion, sees nothing wrong with his behavior, of course. Instead, he fell back onto relying on more rationalizations, saying yesterday via email…

The mongrel offspring of The Golden Rationalization and the Bible-based dodges a bit farther down the list, the “They’re Just as Bad” Excuse is both a rationalization and a distraction. As a rationalization, it posits the absurd argument that because there is other wrongdoing by others that is similar, as bad or worse than the unethical conduct under examination, the wrongdoer’s conduct shouldn’t be criticized or noticed. As a distraction, the excuse is a pathetic attempt to focus a critic’s attention elsewhere, by shouting, “Never mind me! Why aren’t you going after those guys?”

Then Ross let everyone know that  since all of the ethics commissioners are appointed by partisan officials, it’s OK for him to put partisanship above ethics. That was predictable: he’s embracing Rationalization Numero Uno, “Everybody does it.” Kids usually start spouting this one around the age of seven. Adults in positions of trust should have learned to reject it by the middle of high school,

Asked if he would rule on ethics complaints that involve those he has previously attacked on Twitter and elsewhere, Ross responded, “Of course.”