Many readers have been sending in suggested post ideas, which is especially appreciated since the news media seems to have decided that only pandemic-related matters, Democratic Party-boosting  and Trump-bashing are worthy of prominent coverage. Let’s look at today’s Times front page—one, two—out of six stories, only one, at the bottom of the page, isn’t in one of these three categories.

I’ve also been receiving much appreciated help fixing typos. Thanks. Sometimes I find my own mistake, like noticing this morning that Glenn Logan’s excellent Comment of the Day from the weekend somehow got posted without a headline or a tag mentioning that it was the Comment of the Day.

1. Is State Secretary Mike Pompeo  really as irresponsible, reckless and arrogant as it appears?  The firing of Inspector General Steve Linick is causing “firestorm” #81,753 of the Trump administration because he was reportedly investigating the Secretary of State’ss alleged misuse of taxpayer-funded assets for personal rather than professional purposes. Last summer, members of Congress looked at a whistle-blower complaint accusing Pompeo of asking diplomatic security agents to run errands like picking up restaurant takeout meals and retrieving the family dog from a groomer. In October, a Democratic senator called for a special counsel to investigate his use of State Department aircraft and funds for frequent visits to Kansas, his home.

More than one Trump Cabinet official has had to leave because of this stuff. Anyone working for President Trump has to know that they are under special scrutiny because a whole political party and the news media is searching for any means possible to weaken Trump’s Presidency, throw monkey wrenches into its work, and further undermine public trust. What Pompeo is accused of is petty abuse of power and position, but it is still abuse, and also arrogant rich guy-entitled, “Mad Men” style  self-indulgence. Pompeo knows it’s wrong, and also knows he’s a target. If the allegations are true, it is really stupid for him to do this, and also stupid for the President not to have announced a no-tolerance policy about this kind of conduct months, heck, years, ago.

2. An ethics analysis I had never heard of before: “The Shopping Cart Theory.” [Pointer: valkygrrl]

Are you a bad member of society if you leave your cart in the parking lot where a shopper can easily grab it to enter the store? Presumably not, though right now grocery stores have employees sanitizing the cart handles, so one that is not properly returned also poses a health risk.

The Shopping Cart Theory is an excellent example of applied signature significance.

“I wanted to talk for a moment about something that occurred on Sunday’s edition of ‘Meet the Press.’ During the program, we aired a soundbite from a CBS News interview with Attorney General Bill Barr. In the bite that we aired and commented on, Mr. Barr was asked how he thinks the history of his decision to end the prosecution of former National Security Advisor Michael Flynn will be written. Mr. Barr answered, quote: ‘History is written by the winner, so it largely depends on who’s writing the history.’ In the full version of the interview and transcript, he went on to say, ‘But I think a fair history would say that it was a good decision because it upheld the rule of law.’ Now, we did not edit that out. That was not our edit. We didn’t include it because we only saw the shorter of two clips that CBS did air. We should have looked at both and checked for a full transcript. A mistake that I wish we hadn’t made and one I wish I hadn’t made. The second part of the Attorney General’s answer would have put it in the proper context. Had we seen that part of the CBS interview, I would not have framed the conversation the way I did, and I obviously am very sorry for that mistake. We strive to do better going forward.”

4. Speaking of Catherine Herridge: The CBS reporter entered a purely factual story on the Michael Flynn  “unmasking” list that acting Director of National Intelligence Richard Grenell gave Congress this week. In addition to showing that Joe Biden had lied about his degree of participation in the Flynn matter, she also was defying an apparent mainstream media agreement to embargo the emerging details of so-called “Obamagate.” Andrew Bates, a spokesperson for Joe Biden’s campaign,  attacked Herridge, tweeting,

“SCOOP: Catherine Herridge is a partisan, rightwing hack who is a regular conduit for conservative media manipulation ploys because she agrees to publicize things before contacting the target to ask for comment,.”

Boy, can you believe that Trump? What an autocrat! He actually attacks journalists any time they publish…oh. Right.

Bates took down the tweet. One thing you have to give credit to Trump for, he almost never takes down his actual stupid and offensive tweets.

5. And speaking of that…This much maligned tweet—which several of my Deranged friends rushed to post on Facebook, apparently was a hoax: 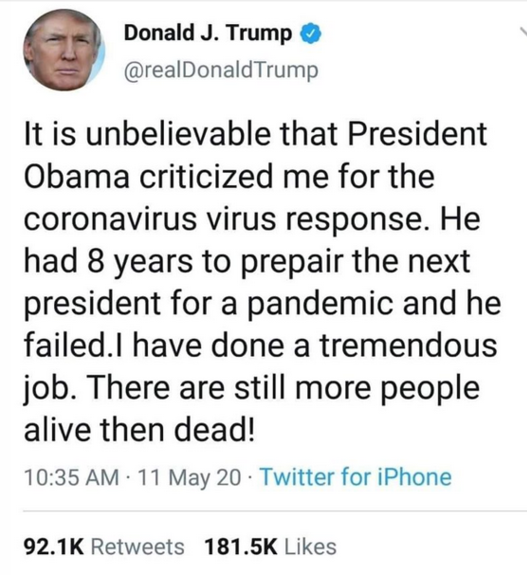